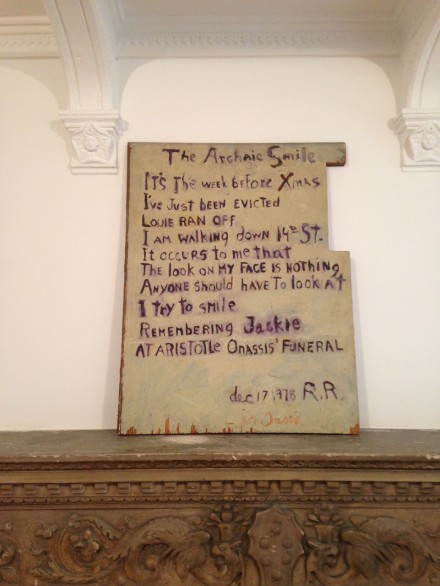 An artist embracing multiple formats, genres and techniques, Rene Ricard was born into a troubled family in Boston in 1946. Before he was eighteen years old, Ricard had already moved to New York, and immersed himself in its vibrant Downtown scene, appearing in many of Andy Warhol’s films, and becoming a regular in the artist’s “Factory.”  Referred to as ‘the George Sanders of the Lower East Side, the Rex Reed of the art world’ by Warhol, Ricard emerged as a highly influential art critic in the early 80’s, playing major a role in launching the careers of artists such as Julian Schnabel, Francesco Vezzoli, Keith Haring and Jean-Michel Basquiat, whose graffiti works were compared to the wall paintings in Pompeii by Ricard in his famous Artforum essay The Radiant Child. 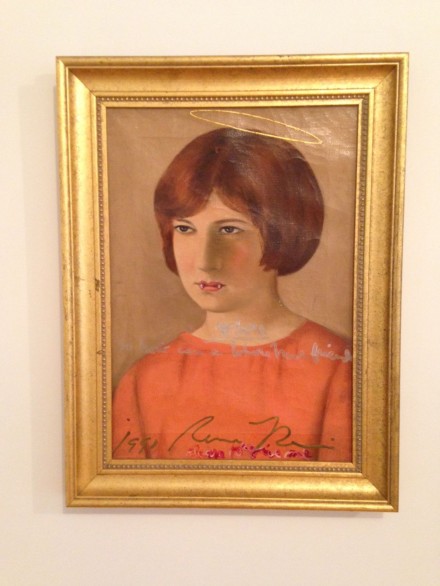 As a poet and a painter in his own right, Ricard produced an impressive body of work starting in the late 80’s, building a distinct style in which he mostly combined verse with found artworks by anonymous sources. Celebrating the artist’s diverse output, Half Gallery is presenting a selection of Ricard’s paintings in an exhibition titled Remember, featuring work that spans three decades and commemorates the late artist, who passed away in early 2014. 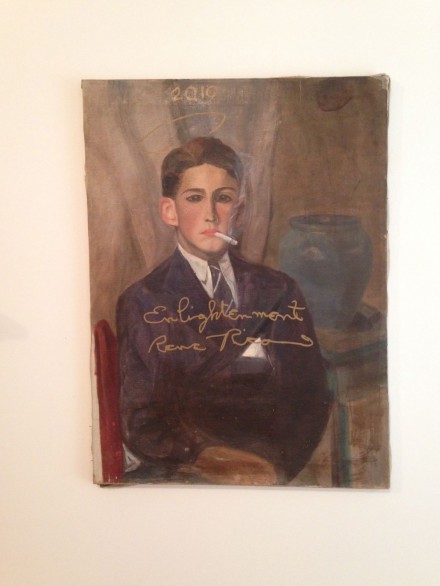 Leaning on the wall above a fire place at the space is Ricard’s first painting in his career, The Archaic Smile, a work of oil on wood which bears the text of one of his own poems, setting a pertinent example for the engaging harmony between an artwork and its method of display. A considerable portion of the show includes such works, pieces Ricard created by adding his own details to discarded paintings he attained or found. Untitled (Whore), for example, a portrait of a young girl that Ricard accentuated with a pair of fangs and a halo along with his own signature, or Enlightenment, combining a portrait of a young boy with a burning cigarette and another halo, suggest Ricard’s witty and ridiculing approach to the artistic endeavor to build new, profound meaning.

It comes as no surprise that, as an art writer who penned numerous articles on artists and their works, Ricard takes an ironic and humorous look at the practice of art making.  The most vivid outcome of this manner is …just put your lips together + blow (Whistler’s mother), a replica of James McNeill Whistler’s infamous painting Whistler’s Mother with the titular, somewhat crass quote alluding to the Humphrey Bogart and Lauren Bacall film To Have and Have Not, among other things. 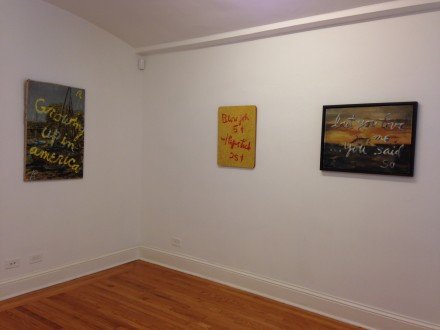 The subdued tones and stark text of Ricard’s focused body of work makes for an intriguing introduction to the artist’s work for new initiates, while holding ample surprises for those seeking a more nuanced look at Ricard’s impressive creative output.

Rene Ricard: Remember is on view at Half Gallery through September 8, 2014.

This entry was posted on Friday, September 5th, 2014 at 12:00 am and is filed under AO On Site. You can follow any responses to this entry through the RSS 2.0 feed. You can leave a response, or trackback from your own site.