Lee Ufan‘s work takes its strength from its silence.  Utilizing simple materials placed into careful interactions with the space around them, the Korean artist has pioneered his particular brand of minimalism over the past half century.  Tight, angular lines converge with natural materials in carefully measured configurations, often utilizing the passage of shadow and light through the work to create a nuanced dialogue with its surroundings. 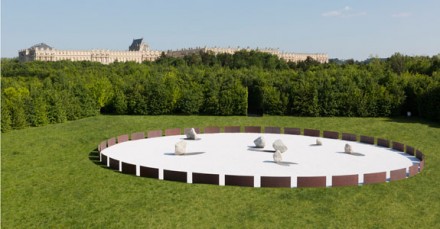 It’s these strengths in execution that underscore Ufan’s commission at the Palace of Versailles in France.  The exhibition, which opened earlier this summer, makes much of Versailles’s long, flat expanses of lawn, and the extended pathways that run along the vast estate.  Mirrored plates, squares of steel and heavy stones emphasize the geometries at play in the home of the Sun King, creating meditative spaces where the lines and flows of the palace are allowed to focus. 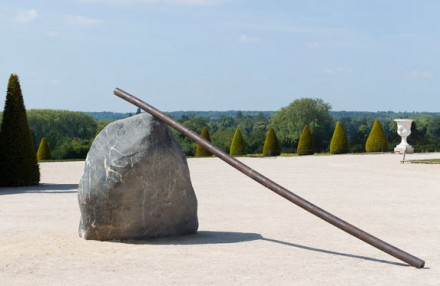 The artist’s practice at Versailles seems to take each location on its own terms here, carefully studying the elements of nature and human construction at play at each selected space, then fabricating a piece or series of objects that bring this interaction to a concise point.  In one impressive work, Ufan stretches an enormous arc over a single line of mirrored steel, placed directly in front of the palace’s main building.  Approaching from the front, the viewer can see the masterful French estate bounded by the work, while light plays along the surface below it.  In another, a wall is stretched through a grove of trees, counteracting the gentle curves of their trunks with the hard black surface that seems to negate the tranquility of the grove with its looming shadows.  The perfect intersection of spaces and geometries makes the final result almost surreal. 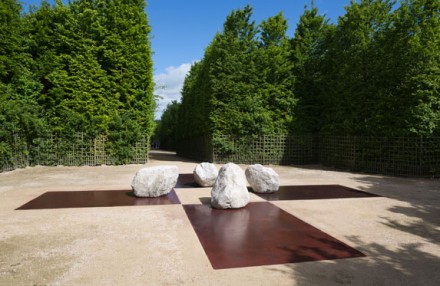 Other works on view seem to abstract Ufan’s already established language, taking the hard vertical and horizontal lines of his pieces and turning them in on themselves.  A series of flat panels alternate with stones and steel rods in one series of works, a series of variations that bear a striking similarity to a rock garden.  However, Ufan’s work turns the meditative practice of tending the space around these objects in reverse, and instead places the energy of the space in these points of interaction.  The vitality of his materials, and the space between them each take a turn at center stage. 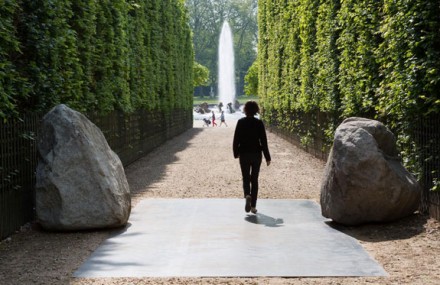 Ufan’s work here makes much of the relationships between nature and his own manmade objects, and the space between his works takes on an interesting significance in its own right.  At day’s end, the viewer is always reminded that the space itself has already been mediated by the palace’s original architects.  Groves of trees and running hedges feel just as manufactured and meticulously placed Ufan’s framework, and the hands of those who have shaped Versailles in the past centuries become ever more apparent in turn.  By taking the space and movement of the grounds as his starting point, Ufan brings the visitor to a startling realization of the palace’s ambitious attempt to reshape nature, and nature’s subtle response.

The installation is on view through November 2nd. 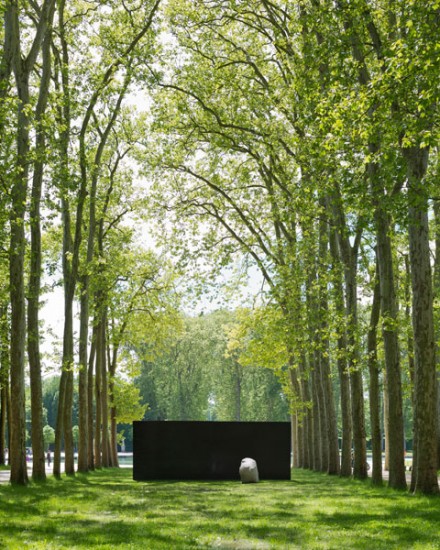 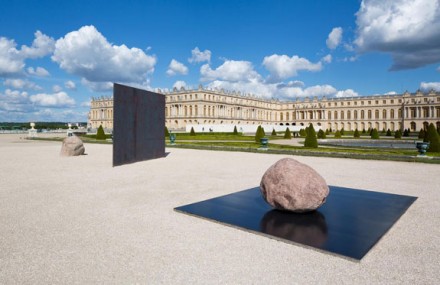 This entry was posted on Tuesday, September 2nd, 2014 at 12:00 am and is filed under Art News. You can follow any responses to this entry through the RSS 2.0 feed. You can leave a response, or trackback from your own site.