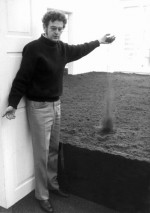 Gagosian Gallery has announced that it will represent the estate of artist Walter de Maria, continuing a relationship the artist had with the gallery during his life, showing there several times.  The gallery’s first step is assisting in establishing a Foundation to oversee his estate and work.  “Walter so wished to establish his own foundation, but sadly, he did not accomplish this during his lifetime,” says Elizabeth Childress, former director of the artist’s studio. “It is an important step to have as a protection and a promotion of his legacy.”

Read more at The Art Newspaper

This entry was posted on Tuesday, October 21st, 2014 at 1:14 pm and is filed under Art News. You can follow any responses to this entry through the RSS 2.0 feed. You can leave a response, or trackback from your own site.