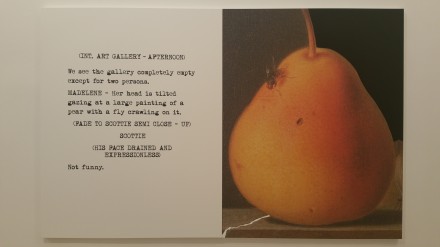 John Baldessari, Movie Scripts/Art: With a Fly Crawling on It (2014), via Art Observed

One of the most prominent names that defines the past 40 years of West Coast conceptualism, John Baldessari is currently presenting a new body of work at Marian Goodman Gallery. Titled Movie Scripts / Art 2014, the series resumes the pioneer’s investigation on the visual language of artworks and the possibility of a dialogue between images, words and cultural formats like film and literature. Baldessari, who has always been curious about the range text can explore in artistic expression, has not been hesitant about placing images next to sentences and written situations, often directly posing questions to the work or offering sarcastic alternatives to its surface level relationships. 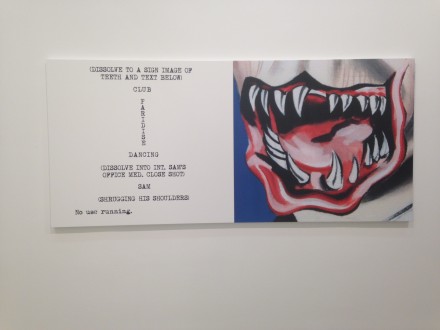 John Baldessari, Movie Scripts / Art: No use running (2014), via Osman Can Yerebakan for Art Observed.

Taking this pre-existing interest even further, Baldessari’s fascination with the bond between words and images in Movie Scripts/ Art boils over into the process of abstracting both the image and the text components in these inkjet prints.  As far as images go, the artist chooses to focus on certain details in the Old Master paintings he appropriated, often building an unfamiliar and shattered relation with these paintings from the collection of Frankfurt’s Städel Museum.  For the texts in his work, the artist repurposes movie scripts he attained in various ways, underlining the anonymity and randomness within these these dialogues between equally vague characters. 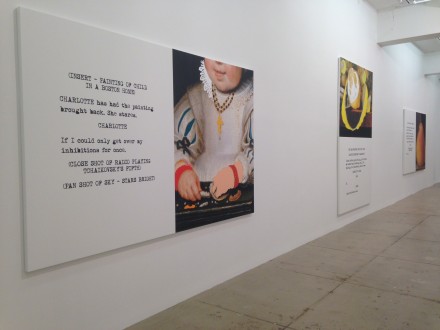 In many cases, the two components eventually orchestrate a contradictory relation, as the roles of the signifier and the signified become ambiguous, and perhaps by some readings, even loaded with a certain degree of vanity. The detail of a peasant woman milking a cow what may be a Flemish painting is paired with text which sees two characters, one of them apparently a painter herself, discussing a painting in which a peasant woman is also coincidently doing the same activity as the image adjacent. In another, a blown-up face of a monkey in blue tones is matched with a dialogue set at the Basel Art Fair, where two people are discussing a painting of a monkey and its bankability in Movie Scripts / Art: Frank nurses the drink. 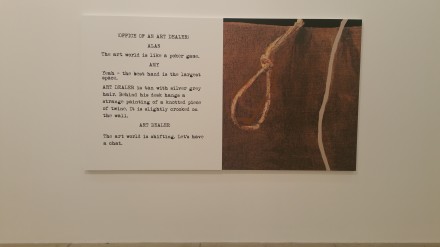 Undeniably sarcastic and critical towards the dynamics of the art world, Baldessari’s affair with the words and images here bears a unity in which these two disciplines, both catering for our visual perceptions, culminate in a balance, instead of in a contradiction. Rather than relying on text to define the painting, or allowing the painting to elaborate on what’s written, these two components make up one uniform body in which single narrations on art equally ridicule and embrace the viewers’ relationship with paintings, either when buying or viewing them. 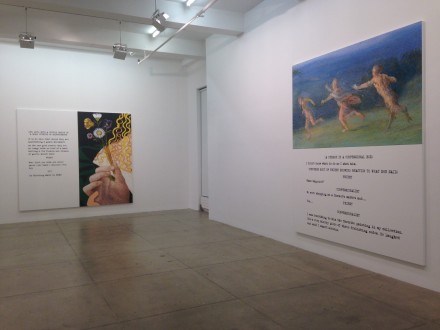 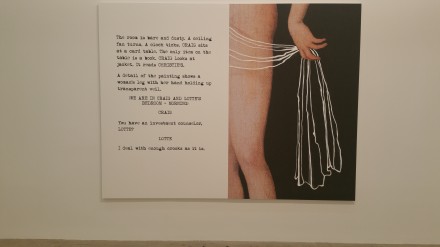 This entry was posted on Saturday, November 22nd, 2014 at 12:00 am and is filed under Art News. You can follow any responses to this entry through the RSS 2.0 feed. You can leave a response, or trackback from your own site.