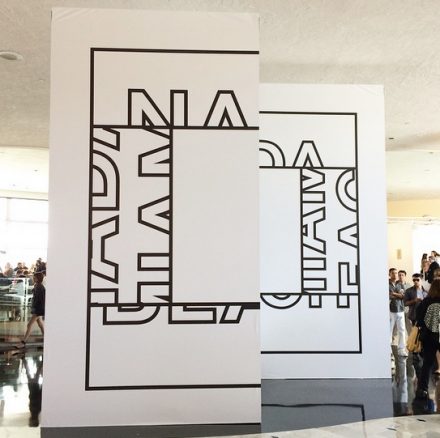 NADA at the Deauville, all photos by Art Observed

Again located up Collins Ave at the Deauville Beach Resort in North Beach, the New Art Dealers Alliance fair seems perfectly content to let the buyers come to them.  Boasting a tightly curated but welcoming atmosphere for younger artists and smaller galleries, the fair has remained a yearly mainstay in the proceedings of Miami Art Week. 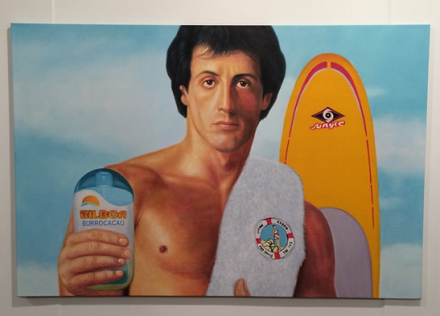 Work by Mike Bouchet and Paul McCarthy at Marlborough Chelsea

The NADA fair has definitely earned its reputation honestly, as the quality and depth of the work speaks to the event’s consistent place at the forefront of the week’s fairs, but perhaps more notable is a distinct aesthetic running through the event, a focus on material innovation and experimentation that leaves one anticipating more from the artists on view. 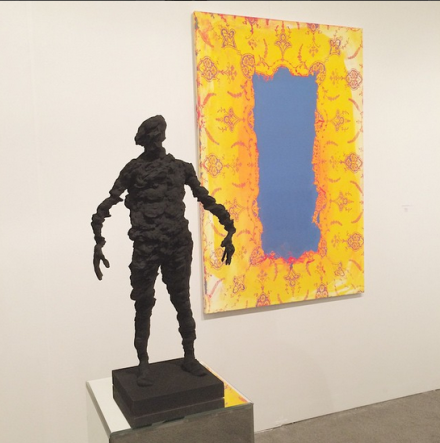 Work by Mark Flood and Jon Rafman at Zach Feuer 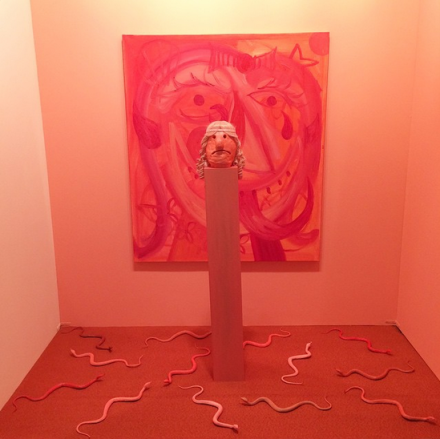 This year was no exception, and the packed crowds at the Deauville spoke to the fair’s impressive reputation.  The event’s multiple wings and relaxed layout made for a slower, steadier browsing experience, and the selection of galleries presented a view of the contemporary market centered much closer to the artists on sale. Massimiliano Gioni and the Dis Magazine team could be seen mingling during the event, and special booths by artist-focused spaces underscored an amicable rapport among those involved. 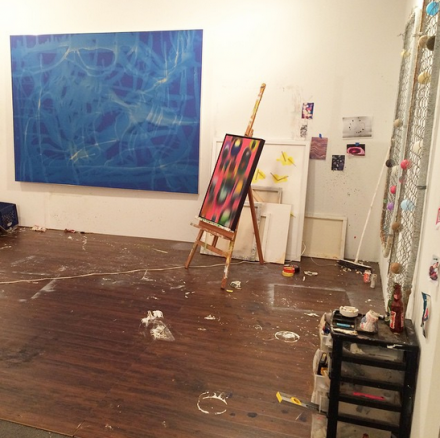 The Hole Gallery‘s Booth at NADA 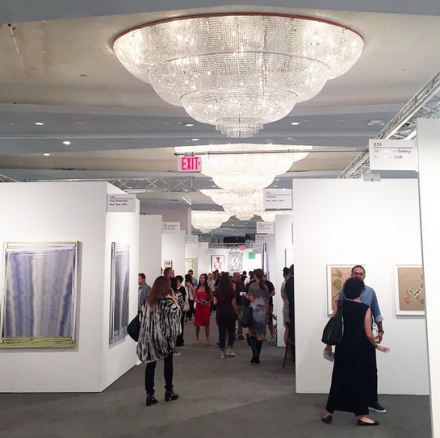 In the halls at NADA

In one booth, UK Gallery The Sunday Painter was showing work by Piotr Lakomy, whose stripped down, rugged minimalist pieces utilized raw material and copious yellow to create an eerily calming installation.  According to gallerist Will Jarvis, the work corresponded to the standard size for a human male, with yellow panels cut meticulously to size.  “He’s playing a lot with light, with time, all through this anthropometric environment,” Jarvis said.  Over at Marlborough Chelsea, the gallery was showing work by Paul McCarthy and Mike Bouchet, as well as sculptures by Tony Matelli. 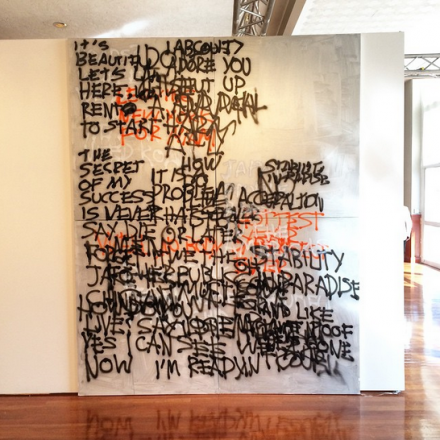 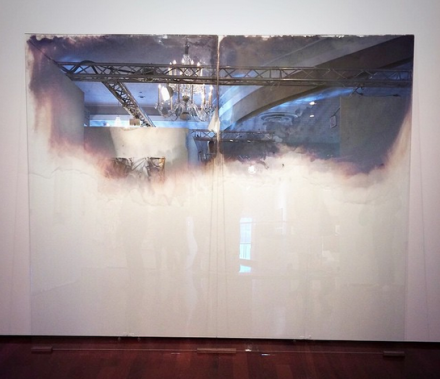 Continuing what seems to be an ongoing tradition of word of mouth installs, Jon Rafman was operating an augmented reality simulation out of his hotel room on floor 11. The Oculus Rift based work allowed viewers to enter a recreated hotel room, slowly decaying and falling apart after the simulation removes the elements’ gravity values. The artist told Art Observed that he wanted full simulations of his shows moving forward. “My sculptures are already digitally made,” he says. “I’d just want them in a space that fits, the idea of my work existing in the middle of a swamp for instance.” 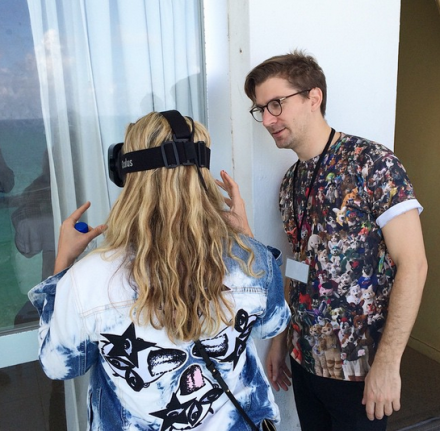 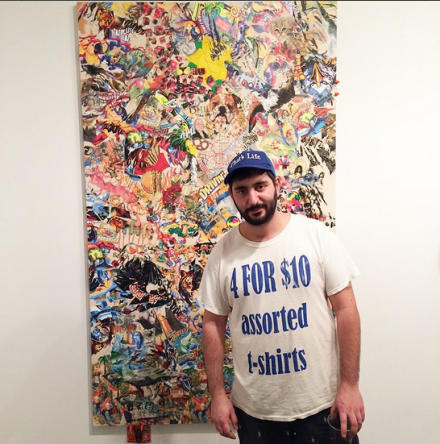 Borna Sammak with one of his works at JTT Gallery 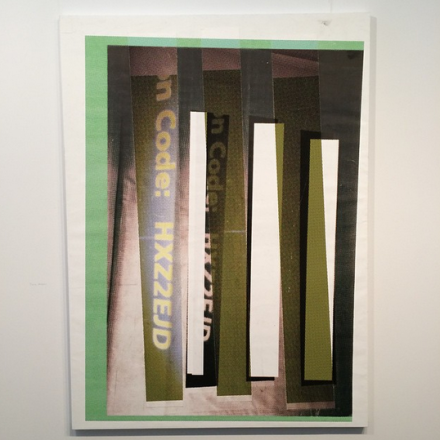 A textured Tamar Halpern work at On Stellar Rays

Back downstairs, Long Island gallery Easthampton Shed was presenting a booth focusing on a single environment built by Brian Kokoska.  With red carpeting, columns and a single comical sculpture, the work was one of the more striking outliers in a fair that can often be defined by a certain material preoccupation. 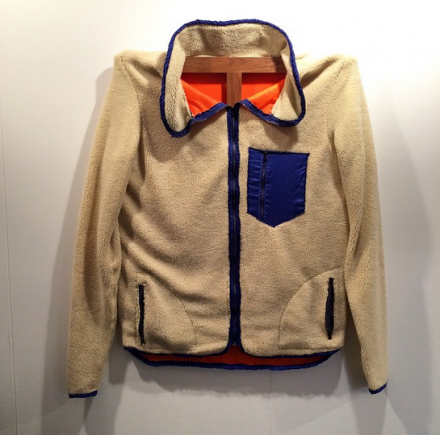 A James Viscardi work at The Sunday Painter 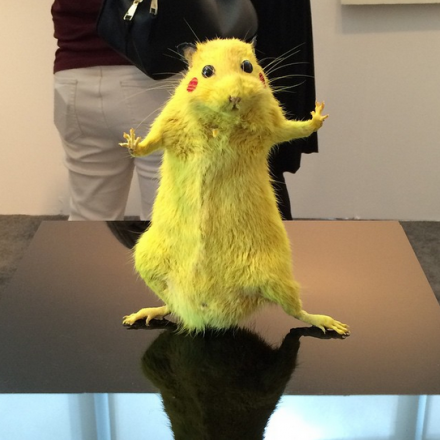 The Hole also continued its innovation on the works for its show, hanging their offerings in a booth decorated to look like a messy artist’s studio.  Recreated tubes of paint, brushes and storage containers mingled with work by Matthew Stone and other artists from the space, creating an environment where visitors stepped cautiously to avoid trodding on works, or bumping against a stack of pieces unceremoniously stacked against a wall.

The fair’s week run at the Deauville has concluded, but the fair will return to New York in the spring. 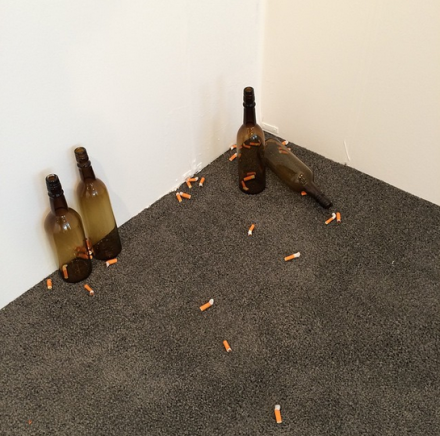 Work by Dan Colen on view at KARMA 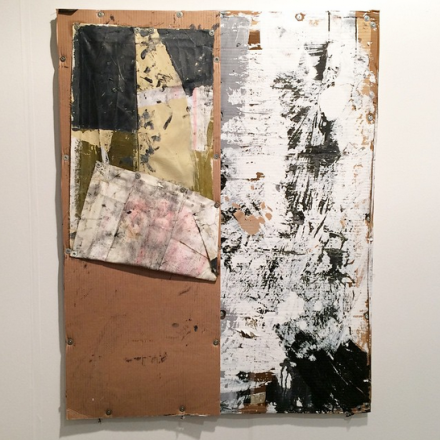 A piece by Ben Horns at KINMAN

This entry was posted on Monday, December 8th, 2014 at 3:03 pm and is filed under Art News. You can follow any responses to this entry through the RSS 2.0 feed. You can leave a response, or trackback from your own site.