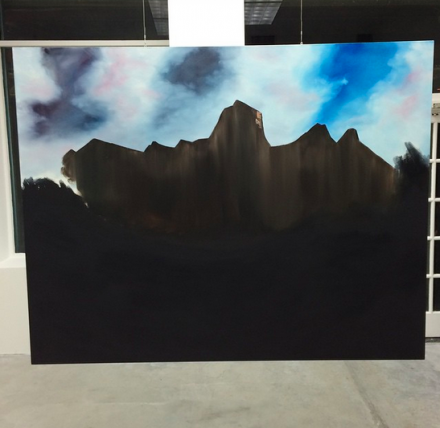 Brendan Lynch, Not Quite Spring (2015), via Art Observed

The Still House Group has always presented something of the enigmatic in their works and performances, lifting objects and materials directly from the quotidian landscapes of modernity and refashioning them as something of a compositional element, or a compositional subject in their own right.  Take Brendan Lynch for example, the young painter whose work has embraced slurs and gobs of paint, concrete, and plastic water bottles as elements for surreal installations.  A certain commodity element dominates Lynch’s work, blended in with a certain material fascination with surfaces and textures. 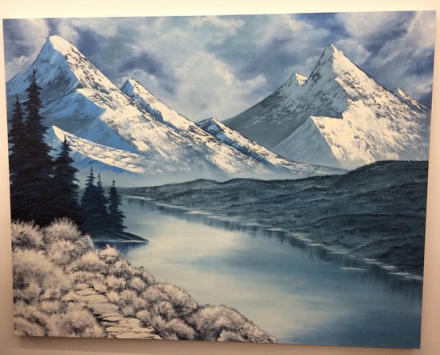 Yet given the artist’s work, his skills as a painter have remained relatively undisciplined, a facet of his his skill set that the artist seeks to remedy in his new exhibition at the Group’s newly founded, temporary space Howard St.  After purchasing the Instructional DVD for Bob Ross’s Mountains Collection, Lynch went to work for the first time with oil paints, creating banal mountain scenes from Ross’s long-running paint by numbers television series.  The result is a strangely compelling series of works, executed in Ross’s immediately familiar style, yet held away from straight away landscape painting by the occasional inversion of scale, depth and presentation. 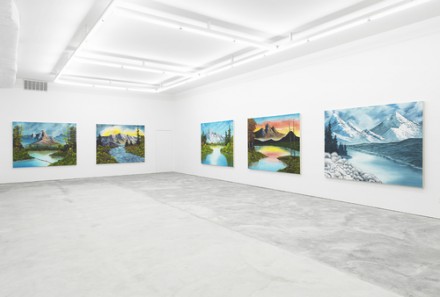 Taking the original paintings from the DVD and scaling them up for the works in the show, Lynch’s act of translation leaves fractures throughout each canvas.  Breakdowns in scale and scrape marks that clearly require more paint in their larger versions lend each piece a rugged quality that places them somewhere between the original Ross composition and Lynch’s own subjective approach.  Long fascinated with the textures and aesthetics of commercial objects, and their use, the techniques here feel like a fitting continuation, approaching the classic medium of painting from the outside back towards the contemporary art gallery. 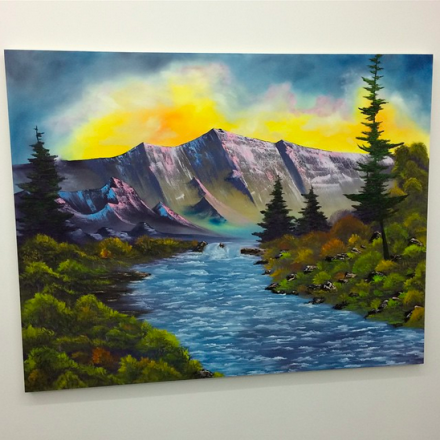 It’s an approach that embraces the performative, the painterly, and the artist’s own career simultaneously, and turns the act of mimicry on its head.  Mass media here becomes not merely a subject of study or a source for inspiration, but a mode of working in its own right.  Rather than merely document or present Ross’s work as some sort of readymade technique, Lynch undergoes a full immersion into another artist’s style, offered up as a commodity in its own right.  Rather than merely place an object on a pedestal, Lynch himself becomes the ground on which the commercial character of Ross and his trademark style plays itself out.  For Lynch, the readymade aspects of the canvas in Ross’s instructional videos is ultimately taken back as a site of personal experience, where his own techniques and willingness to occasionally diverge from the predetermined work creates a hybrid object inextricable from its banal origins or its creator’s own history.

Mountains Collection is on view through March 1st. 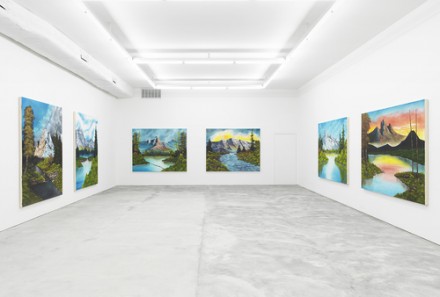 This entry was posted on Thursday, February 19th, 2015 at 12:00 am and is filed under Art News, Featured Post, Show. You can follow any responses to this entry through the RSS 2.0 feed. You can leave a response, or trackback from your own site.