New York – Philip-Lorca diCorcia: “East of Eden” at David Zwirner Through May 2nd, 2015 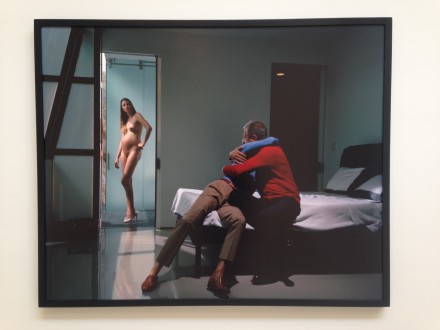 Currently on view at David Zwirner is East of Eden, Philip-Lorca diCorcia’s latest photographic investigation on contemporary humanity and its position within a complexly interwoven cultural setting.  This series reflects diCorcia’s interpretation of a search for equilibrium after the deep impacts of the Financial Crisis in 2007, both during and after the Bush administration. 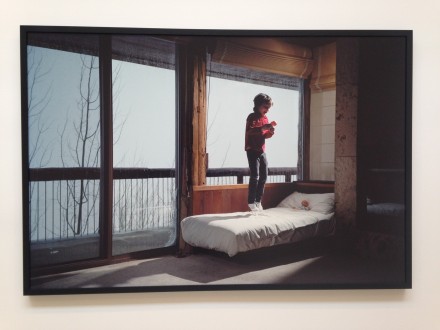 Considered one of the most influential contemporary photographers currently working, diCorcia is widely recognized for his potent juxtapositions in which obliquely evident narratives merge with his earnest testimonial approach. Between documentation and a more orchestrated, fictive presence, the New York-based artist equally glorifies and satirizes subject matter frequently positioned in enigmatic settings.

Similar to Hustlers – his 2013 exhibition, where diCorcia turned his camera to male prostitutes around Los Angeles and captured them in their particular environments in exchange for their actual hourly rates – East of Eden seems to be the outcome of an ambitious visual and contextual investigation.  Evident from its title, the show builds a bridge between the financial meltdown and the Book of Genesis, tying certain motifs and characters in the said text with this contemporary case.  Underlining how matters related to mankind, from carnal desires to untamable greed, remain timeless, diCorcia’s photographs of the human condition beguile the eye with their striking ensembles, while leaving behind many more questions yet to be answered. 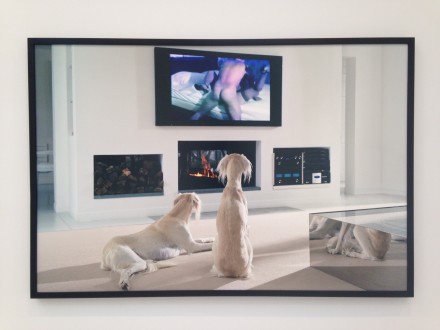 Genesis, for example depicts a toddler enchantedly jumping on a bed that has a doll stuck inside its sheets, in what seems to an upper class winter house. The Hamptons, on the other hand, strikes with its camera perspective and curious narrative, composing a bitter humor through two dogs, seemingly of valuable breeds, gazing into a pornographic image on a flatscreen TV in a highly prosperous domestic interior.

Cain and Abel re-imagines the Biblical brother figures as two male lovers caressing each other under the glance of a nude pregnant woman, a strong reference to their mother Eve. While in the original text Cain is depicted murdering Abel, in diCorcia’s retelling, the duo appears as the agents of an affair overshadowed by their mother’s presence, an attempt to underline the overlooked affinities between each contradiction.

Philip-Lorca diCorcia: East of Eden is on view at David Zwirner through May 2, 2015. 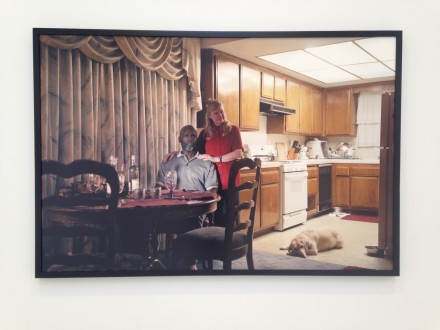 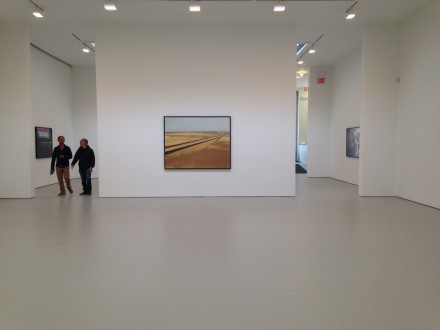 This entry was posted on Wednesday, April 22nd, 2015 at 12:00 am and is filed under Art News, Featured Post, Show. You can follow any responses to this entry through the RSS 2.0 feed. You can leave a response, or trackback from your own site.