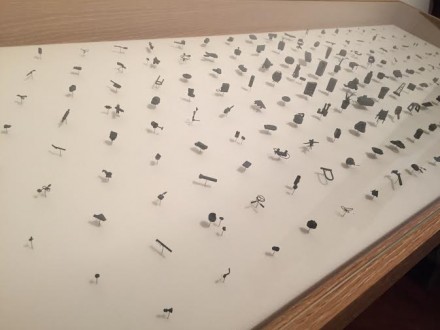 David Opdyke Exhibit A (2012), all photos via Josie Berman for Art Observed

This summer, Marianne Boesky Gallery’s uptown location has put forth a new group exhibition, organized by Aniko Berman, entitled Weird Science, a playful show that dwells on common threads that explore art as a discipline that attempts to logically reveal the possibility of unperceived worlds outside or within our own metaphysical landscape. Through process or content, the artists chosen attempt to expose the fantastic lurking behind everyday occurrences. 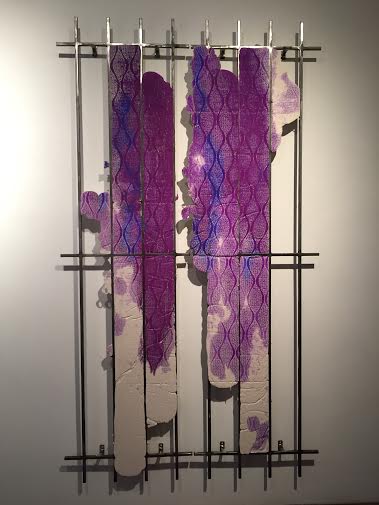 The works on view offer a stark contrast to the gallery itself.  Located on a sleepy, tree-lined block on the upper east side, the building is more a townhouse than a white cube, with a classic stone stoop, mahogany parquet floors, and an elegant staircase leading up three floors. Occupying a space next to the fireplace, however, is a metal case filled with tiny, compulsively crafted, hyper realistic models of various commonplace objects; a ladder, a frying pan, a lock, bent pipes and potted plants, each painted in gray, and pinned to a sterile foam grounding. Through his entitling of the piece, Exhibit A,  David Opdyke urges the viewer to give careful scrutiny to the lifeless sculptures which, from a distance, appear quite unnatural. The voyeuristic perspective of the work lends an absurdity to a defining aspect of human life- the tendency of people to create and destroy, collect and discard. There is irony in that the artist himself was compelled to do the same sort of creation and preservation in the birthing of his piece, offering an even stronger degree of uneasiness and disassociation. 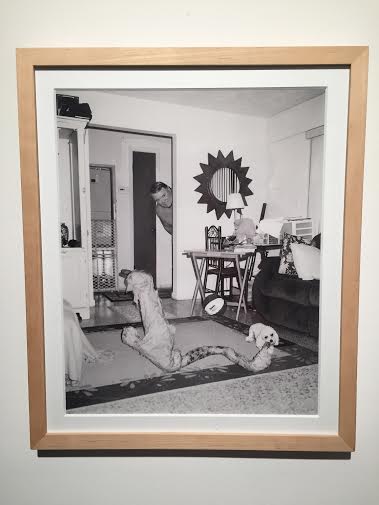 Elsewhere, Berman presents works that lure in the eager voyeur only to frustrate their fundamental myopia: Ruairiadh O’Connell’s untitled pieces present what appear to be dilapidated, patterned curtains which peel back only to expose a steel fencing. Other pieces question the human’s ability to correctly perceive even his own environment.  Asger Carlsen relies on the nature of his medium to bring the onlooker to this shocking realization: his photo manipulation results in a grotesque distortion of a portrait in profile, which, although realistic, is ultimately uncertain in its ontological grounds.  The brain fluctuates between its classification of the photographed object as a human or a bird, or perhaps some other, third category, exposing the unreliability of the human mind in directly registering stimuli in the environment without conjecture. 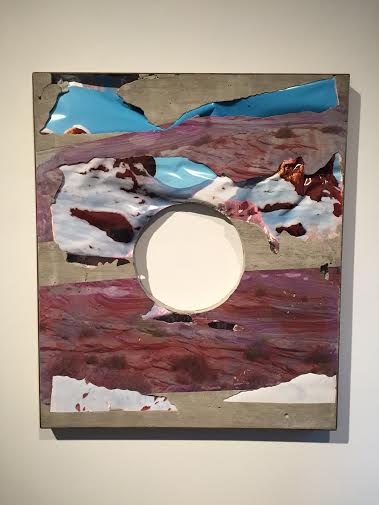 Other works demonstrate an undying conviction towards the importance of alternate dimensions. Letha Wilson’s Joshua Tree Steep Cut (Slash), a c-print composition of a landscape on steel, cut in the center to expose the wall beneath it, could be said to argue that the ability of the viewer to suspend disbelief in his imagining of a 2D painting is itself proof of the ability of the human to envision the unreal.  Along the same vein, an Adam Cviljanovic painting of an unmade bed and an abandoned hallway provoke the viewer to consider the undeniably absent person, questioning the energy that can be instilled unto material objects. Finally, a James Case-Leal lexicon, created by harnessing electro-magnetic radiation from the Big Bang to generate random letters, is itself a tangible result of unseen energies.

Weird Science totes its visitors through a roller coaster crash-course in metaphysics, all through a delightful bevy of poignant images.  The show is on view at Boesky Uptown until August 8th. 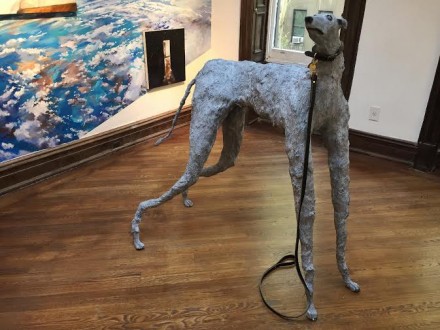 This entry was posted on Tuesday, August 4th, 2015 at 12:00 am and is filed under Art News, Featured Post, Show. You can follow any responses to this entry through the RSS 2.0 feed. You can leave a response, or trackback from your own site.