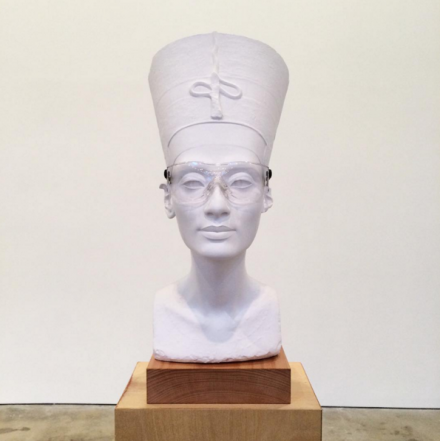 David Zwirner has opened the front door on its elusively large, hangar-style exhibition space on 19th street for a show of new sculptural work by Isa Genzken, continuing the artist’s ongoing interests in the intersections of fashion and sculpture, and an engagement with the  human form in a particularly explicit manner.  The show is the artist’s third with the gallery in 10 years. 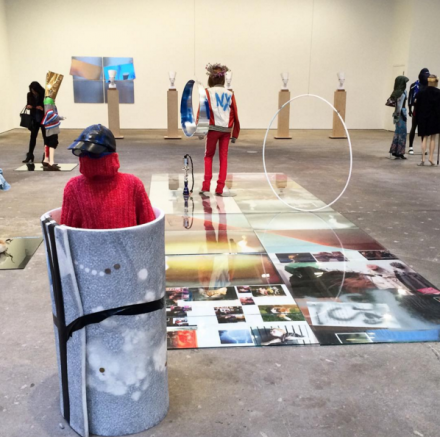 The exhibition welcomes a long meander by viewers, with posed mannequins placed adjacent to wall-mounted works and several towering, more definitively sculptural objects.  Each mannequin is draped in a motley of colors and clothes, often carrying bizarre props or placed in vaguely familiar poses.  First exhibited as part of the artist’s sprawling 2013 MoMA Retrospective, this series, titled Actors, is an intriguing engagement with the body by Genzken, whose work so often seems to dwell more pointedly on the materials themselves.  Here, she drapes and accents the body with clothing and other objects (in one, she comically lays a large piece of netting over a figure), allowing the additions to lay down narrative elements or confound the viewer’s expectations (another highlight is a hooded figure wrapped in what appears to be a large roll of housing insulation). 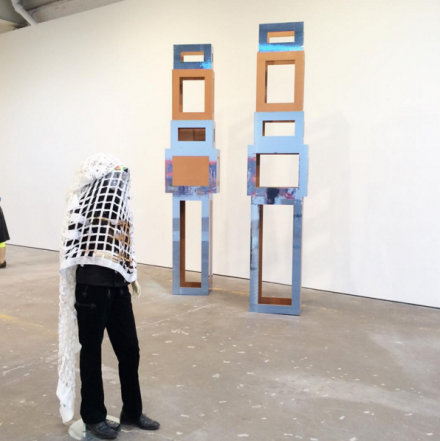 In each, Genzken plays with a new sense of affect afforded her by the presence of the human form.  The immediate familiarity granted her sculptures allows sudden twists of perception or confounded expectations in how the form is presented.  In her more outlandish pieces, a sudden sense of shock may grip the viewer, viewing a human figure twisted in tape, or seeing a baby laid casually against the ground.

At the same time, there’s something distinctly cinematic about these pieces, particularly in the way that the artist has arranged them in relation to the mounted works and sculptures.  Genzken’s Actors seem as if they are populating the neon-hued world that the artist has slowly built over the course of her career, from her inverted formal investigations and blocky, architectural sculptures.  These pieces, like a series of neon-banded canvases hung on one side of the gallery, seem to replicate the art world environment in micro, or perhaps present a linguistic ground for her ostentatiously dressed characters.  In either regard, the show slowly pulls the viewer into its internal series of logics, once again confounding its own rhythm with a series of busts in the back of the space: five sculptures of Egyptian empress Nefertiti,  adorned with safety glasses.  It’s this sense of rhythmic confusion that makes Genzken’s show so appealing, incorporating a diverse body of work into a show that has no problem breaking flows or moments of revery in favor of a constant re-appreciation of the human form, and the formal expectations that follow it. 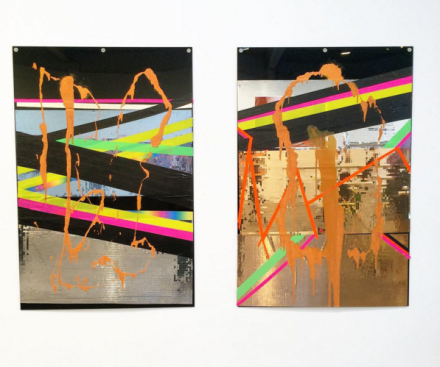 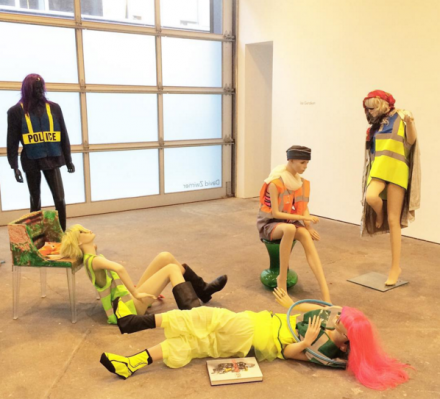 This entry was posted on Wednesday, October 28th, 2015 at 2:43 pm and is filed under Art News, Featured Post, Show. You can follow any responses to this entry through the RSS 2.0 feed. You can leave a response, or trackback from your own site.