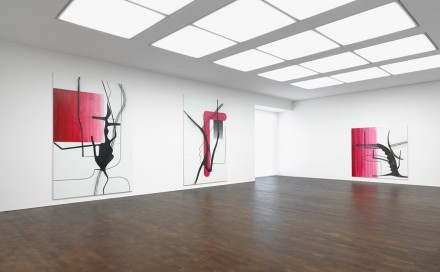 In his work, German artist Albert Oehlen concerns himself with illustrating and exploring the process of painting itself.  From the early 1980’s on, he has combined tenants of figurative and abstract practice in reaction to the Neo-Expressionist trends in painting during the time, eventually Oehlen turning his experiments with various mediums and modes of painting more fully towards abstract painting.  Oehlen frequently approaches painting through a set of restrictions he imposes upon himself: to work at a deliberately slow pace, with only one color, or with unfamiliar or non-typical tools (his fingers, brushes, collage, and in this instance, aluminum-panels instead of canvas).  With a new series of works at Gagosian’s Grosvenor Hill location in London, Oehlen reveals a series of works drawing on digital processes incorporated into the act of painting, continuing certain explorations he began with line painting during the 1990’s, and reflecting his ongoing concerns with constantly testing the boundaries of the medium and its relation to broader modes of production. 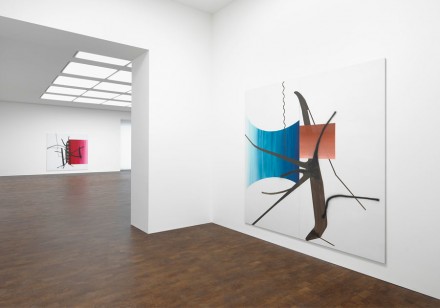 The series represents something of a departure from Oehlen’s typical representation of frenetic, chaotic movement in his works.    His works feature some element of collage, brush strokes, Surrealist automatons and, more recently, composite computer-based images, creating swirling masses of color and form. Yet the paintings exhibited here feature bright swatches of blue, black, red and white, over which skeletal silhouettes of trees are painted.  These trees are meticulously painted in oil,yet resemble a sort of digital coding in their spidery exactitude.  Painted directly onto synthetic sheets of Dibond, a polythene-coated aluminum board, the choice of material, as well as the humanoid tree figures painted featured in each work, lend this series of paintings a sort of science fiction-inspired appeal, yet approached from a disinterested vantage point in aesthetic rigor.  The rich, overlapping colors that serve as a backdrop for these at solitary forms, by contrast, evoke a warm, deep and or natural surface in contrast with the work’s skeletal, occasionally brusque gestures. 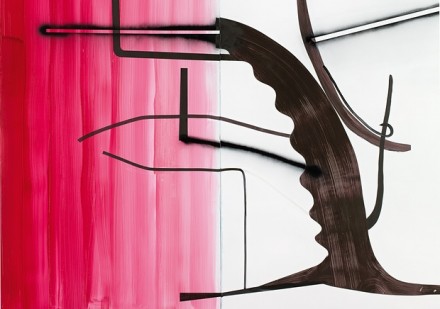 In an interview with the Guardian, Oehlen poses the question: “what happens if you work with something that you are not a master of and don’t control?”  His interest in revealing or exploring the processes of painting, and its contention with indeterminacy, takes place through the constant and intentional reshuffling of his tools, materials, and process. Oehlen is now well-regarded for his series of paintings made entirely in shades of grey, as well as his intentionally “bad paintings,” made in shades of bright red, yellow and blue.  These works, completed in the 1980s, reveal the rigorous terms of novelty that Oehlen has consistently attended to and contended with. 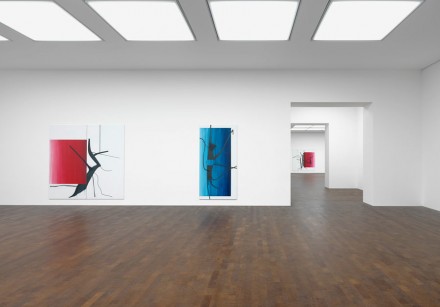 The thin trees, cast onto the stiff, synthetic surfaces that hang in the Gagosian gallery evoke a certain sensation of tension, springing from living in a post-digital world.  The saturated colors resemble a screen of sorts, over which the tree branches reach over or cling to, seemingly drained of any organic quality or color.  Though Oehlen (in the above-mentioned interview with the Gaurdian) articulates his belief that painting should be the opposite of meaning, these abstract forms and figures serve as a potent example of how the default visual language of our age is digital, and the formal considerations in turn are left to a certain algorithmic objectivity.

Oehlen’s work is on view through March 24th.

This entry was posted on Thursday, March 10th, 2016 at 12:22 pm and is filed under Art News, Featured Post, Show. You can follow any responses to this entry through the RSS 2.0 feed. You can leave a response, or trackback from your own site.