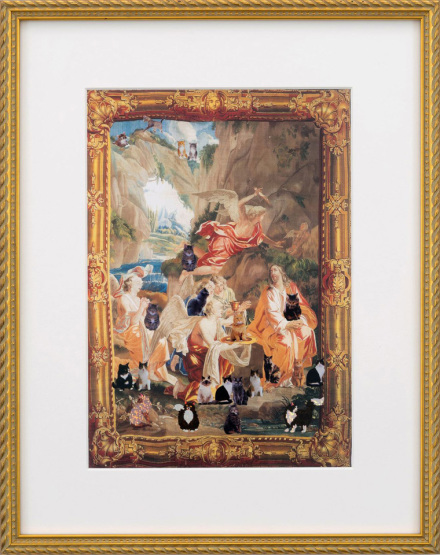 In her eleventh exhibition with 303 Gallery, on view through March 26th, Karen Kilimnik returns to her historically-motivated sense of sarcasm and self-awareness, dissecting the convoluted theoretical foundations of contemporary art, in a trademark language that plays on, and resonates with, notions and concepts of kitsch.  Kilimnik’s uncompromising fascination with the imperviousness of pre-20th century European extravagance, and its depictions in the art of the era, as well as that of modernity, blossom through her own collage techniques here, combining flippant references with lush environs to create critically de-centered works. 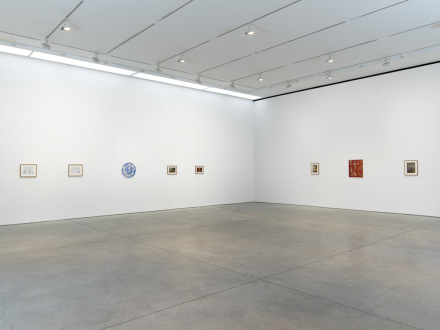 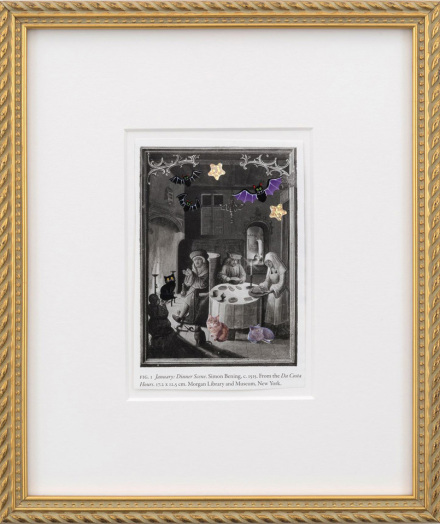 Presented through a diverse selection of subjects and techniques, Kilimnik realizes the interiors of impeccable domiciles, home to the European crème de la crème.  Yet the artist’s own acts of formal subversion convey a sense of theatricality and indulgence through irony, encapsulated in oversized furnitures and startling fabrics played against sudden inflections of modern iconography.  Holy gatherings of saints or aristocratic decadence are filtered through Kilimnik’s humorous lens with juvenile stickers of random objects and animals, most often glitter-covered cats, spread throughout these often cut-out or painted over surfaces, and enclosed by elaborately embellished gold frames. 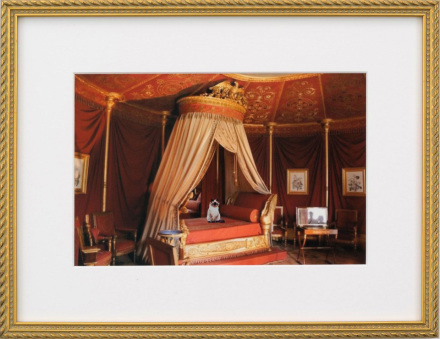 Karen Kilimnik, thank you, this is very nice, I like it, it goes with my coloring (2016)

The status of cats in popular culture, most notably in the online circulation of comical images, internet memes and GIF formats present themselves as a pointed, witty twists on Kilimnik’s subject matter.  Her modestly-sized works are constantly disrupted by these furry scene-stealers, with the humorous notes of her work compounded by elaborately constructed titles.  Works like thank you, this is very nice, I like it, it goes with my coloring; hey! who invited you? this is mine!; or thank you, I’m rested now, I’ll have the lobster today, thank you; grasp stereotypically self-centered characteristics of cats, each time lampooning the language of the lavish interiors they pose in.  Moreover, such self-involved constructions make strangely compelling ties to the historical sense of the haughty aristocrat, tracing the linguistic and cultural formats of contemporary internet culture to longer cultural and historical threads, always executed with Kilimnik’s deftly minimal hand. 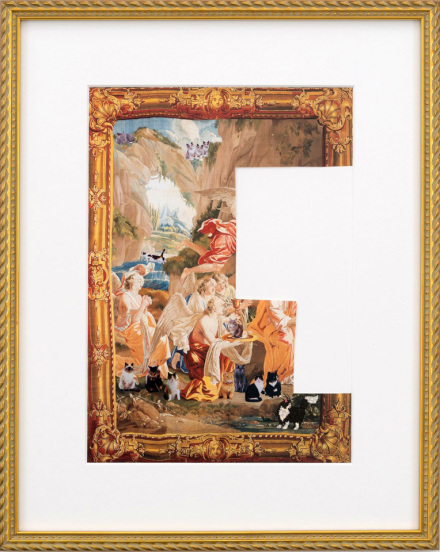 Kilimnik’s small scale works do not shy away from the banal. Instead, the Philadelphia-based artist’s layering of such commonplace materials in stark relation to the historical context of the art world’s often exclusionary airs gives her kitsch operations a strong critical bent.  In a contemporary culture dominated by dull consumerism and the excessive flows of meaningless data and imagery of social media, Kilimnik’s source materials open a negotiation of pre-conceived ideological roots, challenging the orientation of both high and low cultural imagery from a point of intimate interaction. 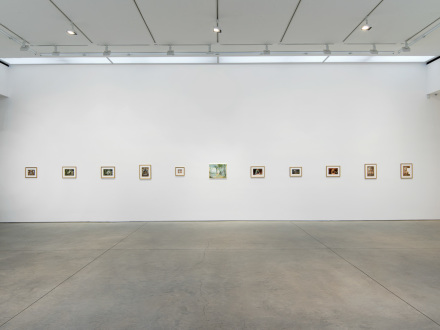 This entry was posted on Sunday, March 13th, 2016 at 3:54 am and is filed under Art News, Featured Post, Show. You can follow any responses to this entry through the RSS 2.0 feed. You can leave a response, or trackback from your own site.