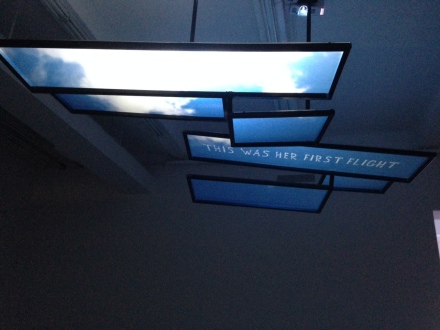 “Staring at the starry field, I ardently hoped…” intones T. J. Wilcox in Word on a Wing (Altar Boy), one of four poems the artist penned for Equivalents, his first exhibition at Gladstone Gallery.  On view through April 23rd, the exhibition urges its audience to stare upwards, much in the same way as protagonist of Wilcox’s poems, to break with the conventional exhibition viewing experience.  Dispersed throughout the high ceilings of the otherwise empty gallery interior are hybrids of steel, Plexiglass and projected video, glaring in the dimly-lit space. 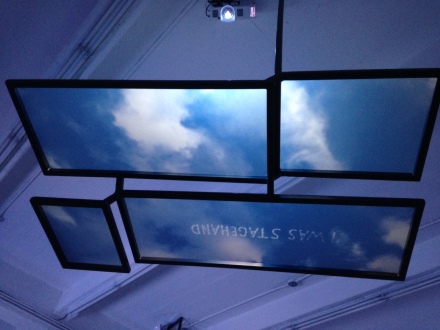 Reminiscent of clouds floating around the sky, these structures, with their advanced rear-projection feature that allows videos project on plexiglass surfaces from behind, see the artist orchestrating a miniature universe within the gallery space.  Contrary to their somewhat complex technological form, these arresting structures, with their jagged lines and varying screen-sizes, bear the gradual progression of Wilcox’s meditative poems in a cloud-like, puffed font, each line retreating to a thin mist as the next line forms onscreen, countering their scale and disjunctive arrangements with their serene color palette and slow movements. 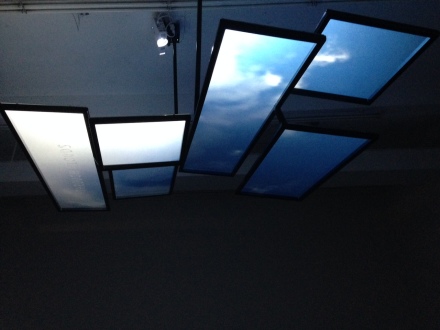 The words Wilcox delivers maintain undertones of existential inquiry, those of a jaded intellectual or the frank confessions of a youth, often blurring the nostalgia of a bygone childhood with trivial, yet potent moments of everyday life.  Intimate, wandering and earnest, lines from these four poems, titled Words on a Wing, calmly emerge one after another only to evaporate in a few seconds, no different than fading clouds against the bright blue skies. 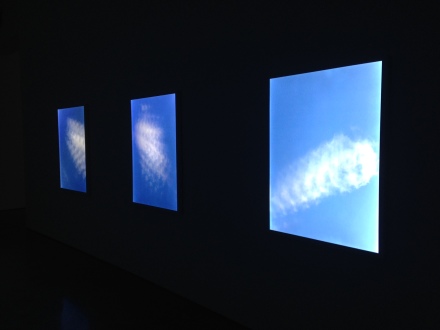 Drawing his viewers attention the uneventful details of urban life is a motif that Wilcox has long incorporated into his oeuvre, recently seen in his 2013 Whitney exhibition, which offered an ambitious, ten-channel circular video installation projecting the New York skyline as seen from his Union Square studio in full panorama.  Similar in structure to the works on view at Gladstone Gallery, Wilcox commented on the ephemeral substance of time and the sky as mutual reflections of each each other through the simple act of movement through space.

T. J. Wilcox: Equivalents is on view at Gladstone Gallery through April 23, 2016. 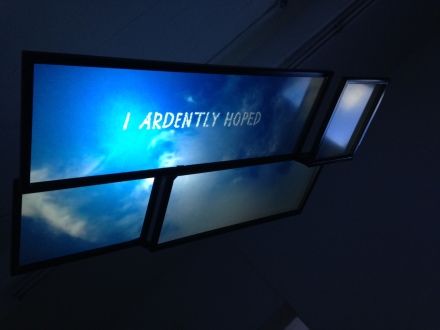 This entry was posted on Wednesday, April 20th, 2016 at 12:21 am and is filed under Art News, Featured Post, Show. You can follow any responses to this entry through the RSS 2.0 feed. You can leave a response, or trackback from your own site.