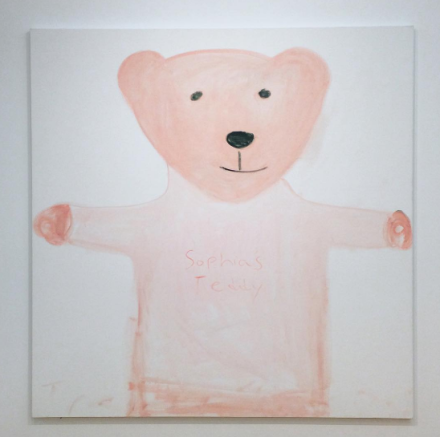 Currently on view at 47 Canal, Trevor Shimizu has realized a swirling fantasia of parenthood, a series of paintings, sculpture and video that turn the act of parenting into an otherworldly, almost surreal experience through his ragged, often comedic sensibility. 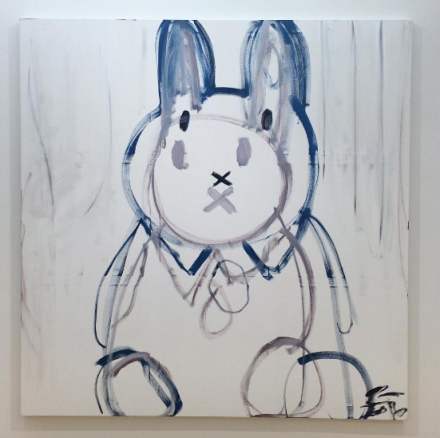 Shimizu’s work here operates in a shared landscape of delirium, a mutual bending of reality that he seems to trace through both the developing motor skills and perception of a newborn, and the sleep-deprived, bleary-eyed mental landscape of a new parent.  His subjects are immense recreations of teddy bears, breastfeeding scenes, and wide-eyed parents, each turned towards caricatures by his aesthetic sensibility.  As Shimizu notes in the comically precise press materials for the show, these toys and distractions are less for the baby themselves, as they are for the parents, a way of softening the blow of wailing children and perpetual exhaustion through bright colors and soft surfaces. 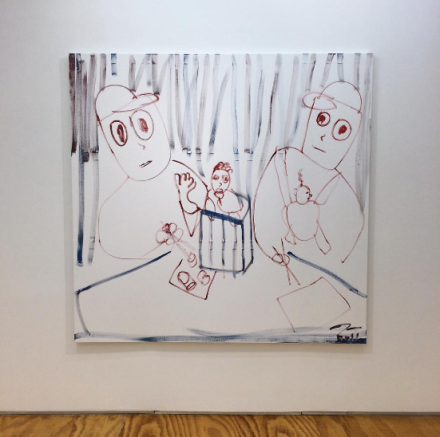 This fragmented reality, a domestic space twisted by the stress of raising children, is afforded additional expressive capacity by the sparse figuration that the artist has long used to impressive effect.  His quickly-executed, almost slapdash approach leads to a wealth of material in the show, and series of variations on his selected themes that echo the aforementioned parental experience.  Stuffed animals and celebrity parents (Jessica Alba is a recurring subject here, thanks to her parenting goods company Honest Co.) are realized through quick, overlapping lines and blurred washes of color that make the images feel all the more foreign, and increasingly psychedelic, as if this self-contained world was slowly losing its coherence. 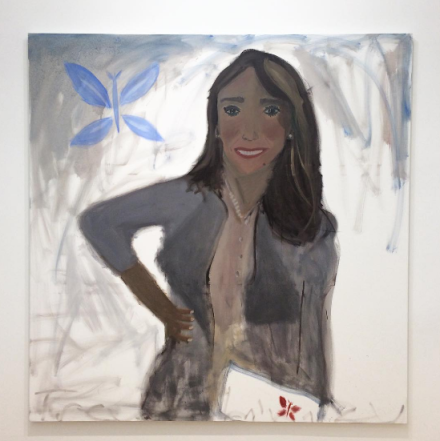 Shimizu seems to drive at the experience of parenting as its own self-contained universe, as a series of cultural objects and awarenesses that isolate the experience of parenting into its own universe.  The show even includes a “Pro Shop,” with a putting green and other works exploring the long-standing respite of the golf course for the average male. The rolling expanse of quiet, still green space marks itself as a private domain, away from the harried life at home, which Shimizu again subverts with his video PGA Tour Live, mocking the concept of the mid-life crisis through a series of videos implying a dad browsing through extreme sports magazines and catalogs.  The work is also joined by a series of “limited edition” Trevor Shimizu branded Reebok polo shirts. 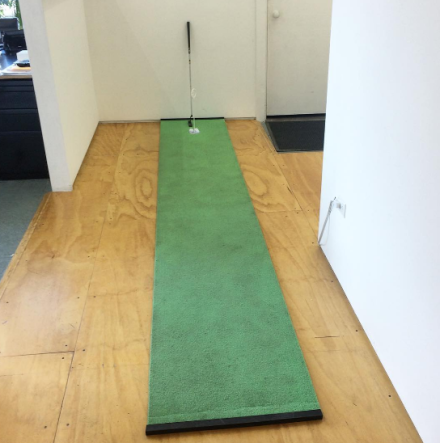 It’s this constant inclusion and distancing of Shimizu from the landscape of fatherhood that gives the show its best moments.  At its core, the works are as much autobiographical as they are snarky aesthetic adventures through the realm of modern parenting, perhaps best exemplified in one of the last works on view, Domesticated Man.  As Shimizu draws himself, a shaggy, rough-shod self-portrait, his press release text challenges and mocks the concept of his role as civilized patriarch: ”I looked in the mirror and made a face that I thought a domesticated man would make.”

Shimizu’s work is on view through July 30th.

This entry was posted on Tuesday, July 5th, 2016 at 7:21 am and is filed under Art News, Featured Post, Show. You can follow any responses to this entry through the RSS 2.0 feed. You can leave a response, or trackback from your own site.