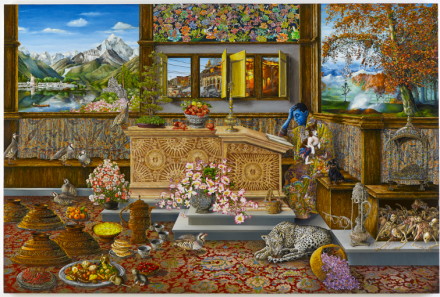 Raqib Shaw, Self Portrait in the Study at Peckham (After Vincenzo Catena) Kashmir Version (2015-2016), via White Cube

Raqib Shaw’s work is flush with context, canvases as densely layered with paint as they are with intersections of religious, historical and personal signifiers, drawing on the sprawling figurative techniques of Renaissance reliefs, decorative arts, and portraiture in quick succession.  His are paintings investigating the techniques and histories of these early Western works, while drawing on his own personal experiences to drive and embellish their original iconographies.  Shaw brings a new body of these works in sculpture and painting to White Cube’s Bermondsey location this month, continuing his investigation of 15th, 16th, and 17th Century art through the lens of his own life. 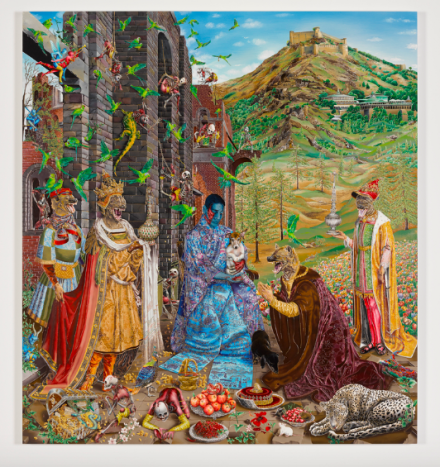 The show spans an impressive amount of ground across the surfaces of each of the artist’s birchwood surfaces, posing grotesque human/animal figures and florid, unraveling scenery against the artist’s own figure, often highlighted in blue skin and posed in the manner of saints or other venerated figures.  By contrat, his sculptures are twisting, serpentine arrangements of the same horrifying creatures and human actors, struggling against each other to create elegant, serpentine forms.  In each, Shaw collides historical touchstones as much as he simulates them, bringing architectural elements of Western landscapes, Japanese interiors, and the surroundings of his childhood home in Kashmir, together in elusively surreal final images. 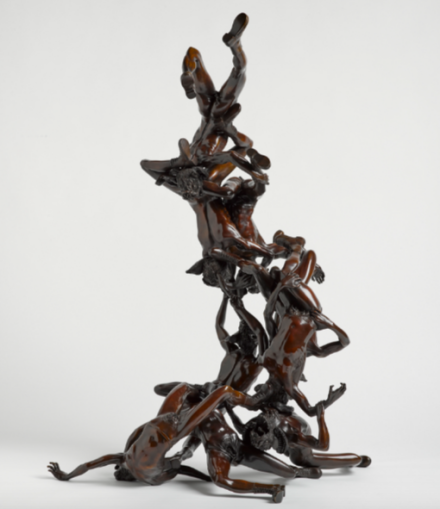 The result is a space where Shaw recreates his own personal mythology out of the fragments of those preceding him, operating on the canon of art history as a series of exchanges and equivalencies.  Shaw’s Peckham studio is presented as both a monastic idyll and a space of fantasy, overflowing with bizarre combinations of skeletons, flowers, food, and wild animals.  In another work, an oracle’s temple, adorned with both Japanese and Greek iconography, is showered with a series of heads, each screaming, laughing or weeping as they cascade towards the bottom of the screen.  Caught between spheres, the image itself seems to teeter on the point of dissolution, as if the combined weight of its combined elements has pushed it beyond the realm of easy association. 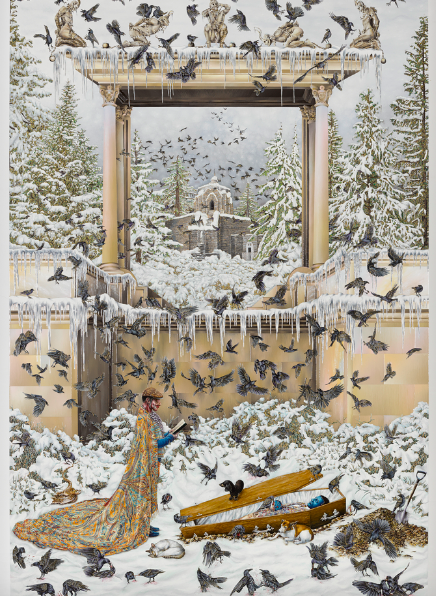 Yet Shaw’s conflations of time and space seem well-anchored by the artist’s own presence in each of the works, the distance between image and referent narrowed by the recurring presence of the artist himself, each time anchoring the works with a sort of character-based continuity.  Through his own prominence in the works, Shaw seems to place his compositions as a sort of dreamscape only he can inhabit, spreading out over each piece and drawing together the related fragments of his own life and work as a cohesive, yet shifting geography.

Rewriting the scope of art history through his own personal engagement, Shaw’s work at White Cube is on view through September 11th. 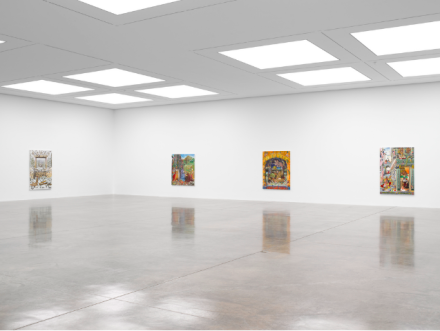 This entry was posted on Sunday, September 11th, 2016 at 9:35 am and is filed under Art News, Featured Post, Show. You can follow any responses to this entry through the RSS 2.0 feed. You can leave a response, or trackback from your own site.