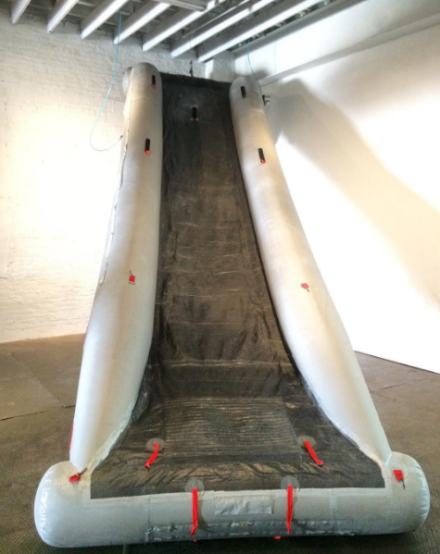 Signal Gallery kicks off its fall season this month with a pair of exhibitions by artist Madeline Hollander and Aidan Koch, an enigmatic combination of formal interests and performative translations of material split between two rooms in the gallery’s Bushwick exhibition space.  Drawing from varied takes on illustration, movement and conveyance of information, the show’s connecting threads are distinctly understated, welcoming the viewer to consider each show’s work in its relation to material, cultural moorings, and each show’s internal systems of objects and actors. 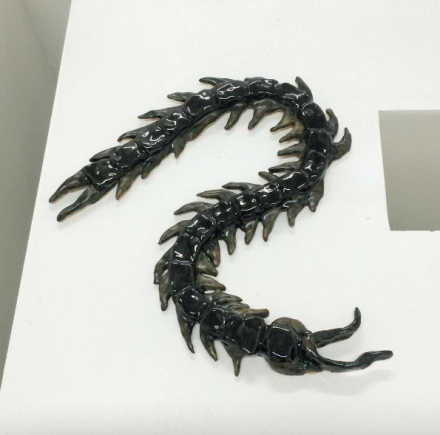 Entering the gallery, one is immediately greeted with Hollander’s Drill a sculpture and performance work that draws on the evacuation procedures and gestural actions of emergency planning.  Draped through the rafters of the space are a trio of connected emergency slides from commercial aircraft, explicitly linked to the visual language of aerospace museum displays.  The sculpture is countered by a dance performance, where a group of dancers pace back and forth underneath the hulking mass, clothed in fireproof hats used in schools in Japan for earthquake and fire drills, and executing movements drawn from demonstrations of flight safety procedures.

These connections between display and action, image and execution, are notable given Hollander’s subject matter.  Throughout, the chaotic breakdown of systems becomes the point of exhibition, and the materiality of disaster becomes the central focus, translating the precautionary into the real, and simultaneously underscoring the disjunct between the two.  “An exit drill’s purpose is to rehearse the movement of a body through space, but this performance illuminates the impossibility of organizing bodies during an emergency,” Hollander told Art Observed.   “The emotion and urgency of the real life event cannot be rehearsed.”

To a certain degree, even, the show presents disaster and chaos as something of a normalized state, one where the performative and the precautionary begin to mix, something Hollander sees as symptomatic of the present global condition.  As fear and anxiety over attacks, crashes, or other unexpected violence become part of the policies in organizing public space, the language of these catastrophes also become part of everyday life.  “Drills, emergencies, and false alarms are all becoming harder and harder to distinguish from each other,” Hollander says, alluding in particular to a series of recent false alarm gun scares at both JFK Airport and LAX.  “It seems like fear and anxiety have become steady streams of energy instead of acting in their more typical adrenaline rush pattern of highs and lows.” 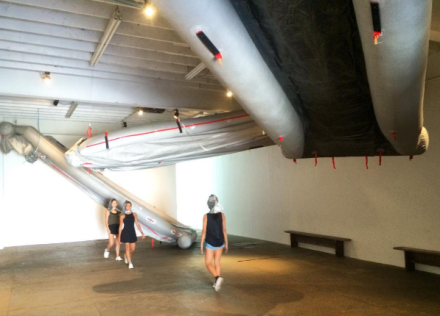 In the back room, artist Aidan Koch works a similar approach through a distinctly varied approach to her works and materials, prioritizing the artist’s own illustrations as a central thematic peg.  On one wall, a group of drawings hinting at a mysterious, and somewhat foreboding game, are placed into abstract arrangements of images within the frame.  This sense of a playful, yet ominous system of forces is echoed in a large sculpture in the middle of the space, a wooden labyrinth dotted with small-scale sculptures and objects.  Faces, ladders and a ceramic millipede spread across the walls of the work, presenting a surreal twist on the work that echoes both Koch’s drawings in subject matter and atmosphere.  Their clean, affectless execution only emphasizes the obscured relationships of each actor in her works, as if the frequently referenced game of her pieces was the act of their own decoding. 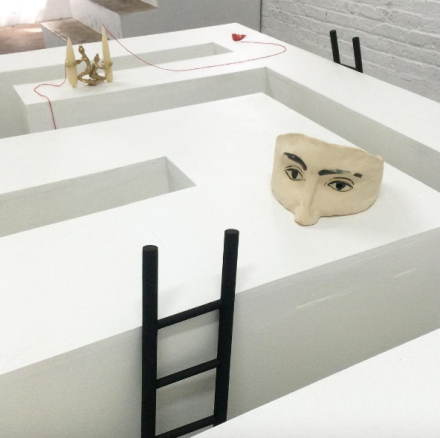 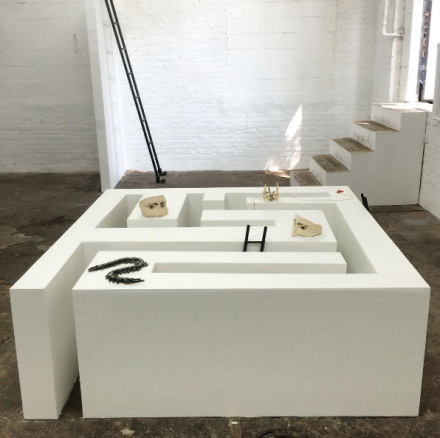 Diverging considerably in terms of subject matter and formal operations, the act of translation and an interest in morphology makes for an intriguing conversation between exhibitions.  While Hollander’s performance and sculptural operation is used to extend the space for consideration of crisis in conversation with the landscape it creates both physically and psychologically, Koch pushes a similar space created by divergent forms and images.  In both, abstraction and exploration reign supreme, welcoming the viewer into a similar cognitive engagement with both work and subject.

Both shows are on view through October 2nd. 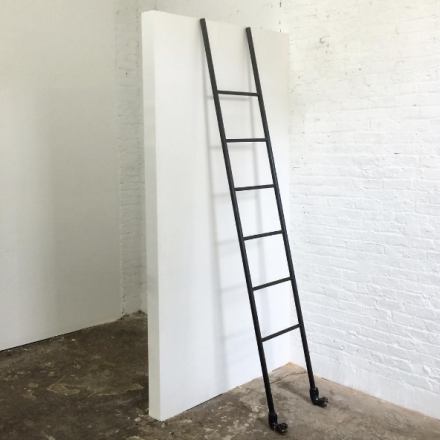 This entry was posted on Sunday, September 25th, 2016 at 2:23 pm and is filed under Art News, Featured Post, Show. You can follow any responses to this entry through the RSS 2.0 feed. You can leave a response, or trackback from your own site.