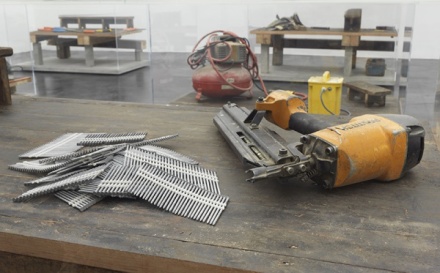 Mike Nelson, Tools that See (Installation view), All images via the artist and neugerriemschneider.

Mike Nelson’s Tools That See (Possessions of a Thief) 1986-2005, on view at neugerriemschneider is a material chronicle of the tools the artist has used over the past 30 years. Immediately recognizable as an homage to the ready-mades of Marcel Duchamp, Nelson’s pieces carry the same force of reality-bending humor as earlier iterations of found object art and the readymade.  The familiar items, ones a viewer may see strewn around a site of construction, are rendered as images withdrawn from their tactile elements, contained in glass frames and elevated on dense wooden pedestals. 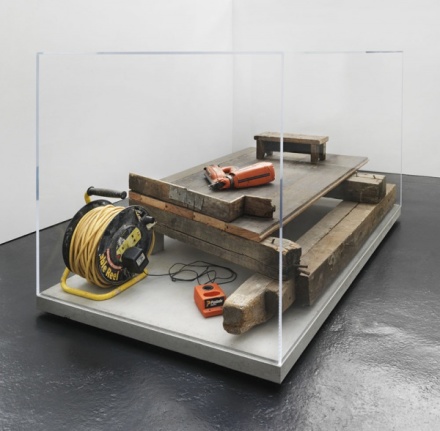 The show is considered as an echo of an exhibition shown by Nelson in Berlin four years ago. Titled Space that Saw (Platform for a Performance), Nelson installed a stage and raised platform within the structures of an old music hall in Berlin-Mitte.  Now, for Tools that See, Nelson has dismantled the materials used in that project, and reassembled them for this show, including parts and pieces of the fabricated platforms and stage previously rendered in the city.  Discreet, island-like platforms contain the individual pieces and tools that go into the construction of large-scale installations, carried out by the artist both here and and elsewhere.  While the physical compositions these objects have helped to create have been disassembled, these discreet parts, the tools themselves, remain, conjuring a sense of intimacy in terms of both the work’s material origins, and the aspects of its process that are often removed or obscured. 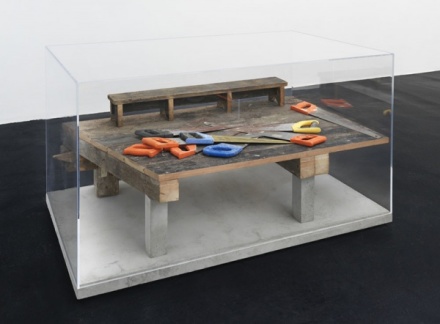 Indeed, as the press release states, “much like the presence of the tools in front of us, Nelson turns his gaze back on himself to study his practice in a very particular vision of the self…The deadpan stillness of this exhibition is an attempt to slow time, to look, and to try to understand.”  There is a sense of the near past in his pieces, and even a sense of the carnal in the display of hand tools, pieces used to manipulate physical masses that equally occupy a dense material space.  The still-dusty handsaws piled onto a dense and heavy platform, suspended on concrete stilts, seem like the cast-offs from a previous, time, lent an additional sense of fetishistic interest through their perfect stillness and elevated displays.  Nelson emphasizes the act of looking here, in a manner that constantly collides and confuses the use of these objects.  By leaving both scene and subject in view, his final work forces the viewer into an exchange with the multiple sites and actions that the artist incorporates into his scenes here. 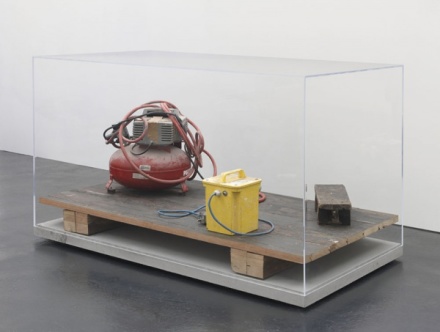 Contained within their glass frames, there is a quality of nostalgia that estranges them from their purely functional nature. The tools suggest a kind of haunting of the space with the materials they have touched, the projects they have created, and are framed in this exhibition as a kind of root system, a structural underpinning that both informed and shaped Nelson’s career.   They are worn and battered, and express the same kind of gnarled wisdom that comes from years of practical use, as if the artist’s own actions could be seen through several layers of abstraction. 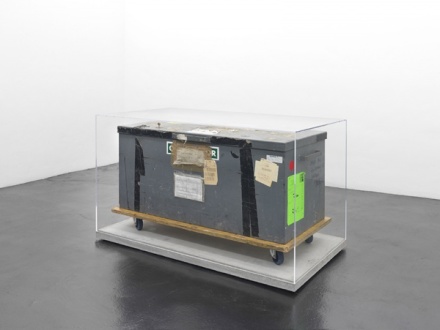 Tools that See speaks to the process of reflection intrinsic to the practice of art making.  The exhausted, dusty, and worn-out tools are laid to rest, yet placed simultaneously in the spotlight.  The intricacies of composition and construction, typically hidden or beside the point when they contribute to a finished product are positioned centrally here.  Much in the same way that the object is enshrined as art at the moment that the artist steps back and gives their approval, Nelson’s inclusion of his material grounds encourages the viewer to contemplate the mass and weight that constitute the means and context of material production.

Tools that See runs through November 5th, 2016 at neugerriemschneider in Berlin.

This entry was posted on Friday, October 28th, 2016 at 12:37 pm and is filed under Art News, Featured Post, Show. You can follow any responses to this entry through the RSS 2.0 feed. You can leave a response, or trackback from your own site.