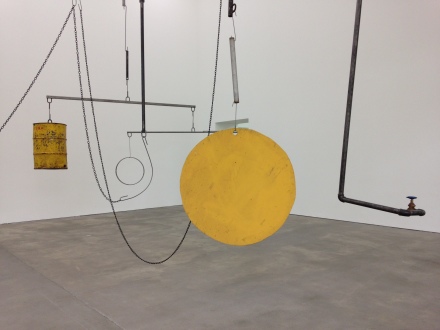 Now on view through October 29th, Sprüth Magers Berlin is currently hosting an exhibition of American artist Sterling Ruby’s recent sculptures and works on canvas.  THE JUNGLE consists of works from Ruby’s series of mobile sculptures, SCALES, conceived for the first time as a single installation.  As the title of the exhibition implies, the suspended and balanced objects that fill one entire room of the gallery evoke a sort of jungle, composed of free-hanging mobiles and other sculptural material Ruby has frequently utilized during his career.

The dense, tangled mess of these suspended objects is distinctly gritty and industrial.  The varying heights and shapes carry the eye around the space in a sort of visual narrative of seemingly haphazard combination, yet the nature of the mobile form itself is undeniably exact.  The play of balance and weight and interdependencies of material is central here, and the title of this series, as well, alludes to the importance of the concept of equilibrium in these hanging forms. 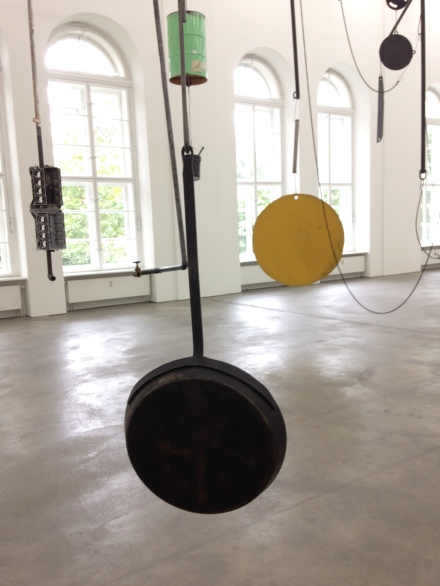 The mobiles are constructed of monochrome, cutout shapes and materials from Ruby’s studio, including components of past works and detritus collected from the studio floor.  An object resembling a frying pan sways delicately amidst linked-together chains, while steel drums, buckets and engine blocks swing nearby.  To view the work, one must duck and dodge the material from the ceiling like a dense network of urban and industrial vines.  The mobiles react to the conditions in the space, moving and swaying on their own. This influence of chance emphasizes Ruby’s attention to the legacy of modernist aesthetics and formal influences of contemporaries Alexander Calder, Chris Burden, and Mike Kelley. 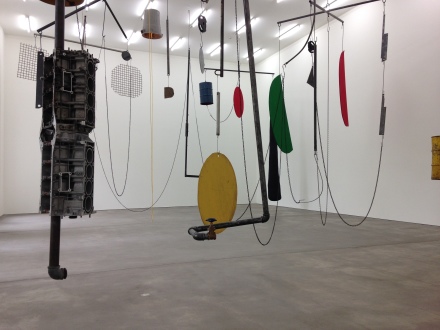 Also on view are a series of works on canvas that reflect Ruby’s investment in textiles and clothing.  In these, the artist offers variations on a theme, exploring the same sense materiality and color through a set of collages, also part of the SCALES series.  Much like his other works, these play on the theme of balance, with strips of material neatly dividing the canvas into two equal parts.  A clear relationship between these canvasses and the mobiles nearby can be discerned, and the images can be read as a vague blueprint for the jungle of detritus presented in the adjoining gallery. 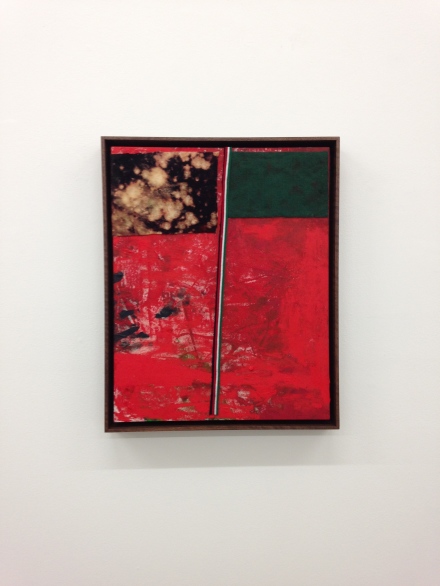 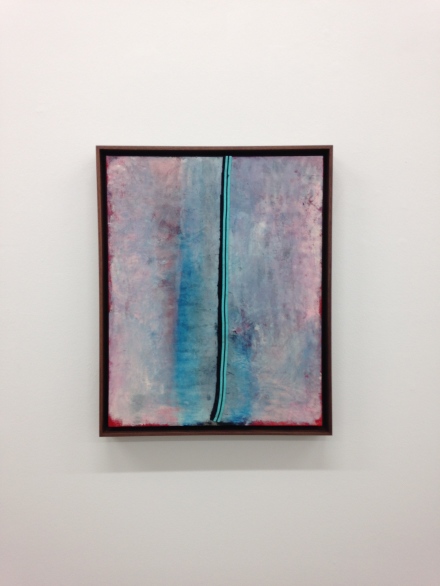 As the press release for this exhibition states, “Ruby’s output across a diverse range of media can be measured as a fine balance between chaos and order.” Over the course of his career, the artist has expressed this coherent vision in painting, sculpture, video, photography, ceramics, textiles, and clothing. As SCALES demonstrates, Ruby deftly navigates this range of material to investigate the fabric of contemporary society and the individual’s constraint therein.

This entry was posted on Saturday, October 29th, 2016 at 2:45 pm and is filed under Art News. You can follow any responses to this entry through the RSS 2.0 feed. You can leave a response, or trackback from your own site.