Brazilian-born, New York-based artist Karin Schneider is currently the subject of a solo exhibition, titled Situational Diagram, at Dominique Lévy this month, delving into artistic and philosophical potentials for  “grasping” an artwork, both materialistically and ideologically.  Schneider, who co-managed the experimental Lower East Side artist-run initiative Orchard Gallery between 2005 and 2008, embarks on a series of black canvases, which offer the artist a degree of freedom to leave narratives open-ended, and to allow relationships and commerce to leave their mark on the painting’s surface.  Each work is subject to a specific agreement with its potential collector, where Schneider’s monochrome-heavy works utilize art history—particularly Minimalism—as a vessel to scrutinize social and consumerist dynamics in art through color and form.

The (O) paintings, sixteen black monochrome paintings installed on a steel structure (referred as “a cage” by the artist) span the gallery’s second floor, a subtle homage to Ad Reinhardt’s black on black squares.  “My desire is to have people slow down,” says Schneider, who not only urges viewers to embrace the meditative impact of black as a color, but also to recognize its ability in complicating typical exhibition design and gallery architecture.  While the letter “o” in their titles refers to obstruction, the artist’s case is the opposite.  Facing a black square within the maze-like structure underscores a relation of various works in conjunction with the introspective mode the painting itself invites.  The painting itself welcomes a personal, intimate and equitable relationship, an unaffected space where the simple black square becomes potentially transformative for any looker, regardless of their expertise in the field.

Moreover, the agreement obligating these paintings’ collectors, that in the future another artist will paint on their surfaces, underscores the  dialogue between each work and the process of engaging with them. “This is, rather, an overambitious, synthetic intrusion of sorts, locating and positioning its public without apology, occupying, and even encaging, however temporarily,” says writer Tirdad Zolghadr in a catalogue essay titled Preoccupied.  The artist’s occupation of the space allows him to compare the notion of occupation as a socio-political notion. While Occupy Wall Street and the occupation of the West Bank assert themselves on our collective vision in defining occupation as a concept, Schneider’s attempt accentuates topics around the art market, intellectual property, and the role of the artist in society.  The ad placed on Artforum to promote this exhibition, solemnly on display at the back of the third floor, shows a picture of a Syrian refugee child next to a fully black page, painfully demonstrating the extents abstraction goes to in manifesting various realities, or leaving them obscured. 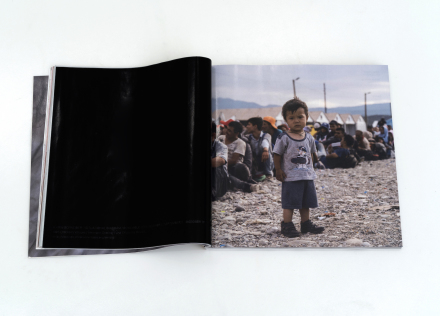 By contrast, Index stands at the entrance to the third floor, a series of paintings dedicated to various types of black used throughout Situational Diagram.  While art historical references prevail throughout the conversation in general, these four paintings add degrees of self-referentiality and interconnectivity within the body of work on view.  Splits pay homage to Barnett Newman’s legendary “zip”paintings, which are particularly iconic for embodying transcendence through simplicity—an approach intricately dissected throughout the exhibition through a contemporary lens.

Karin Schneider: Situational Diagram is on view at Dominique Lévy through October 20, 2016.

This entry was posted on Monday, October 17th, 2016 at 2:47 pm and is filed under Art News, Featured Post, Show. You can follow any responses to this entry through the RSS 2.0 feed. You can leave a response, or trackback from your own site.