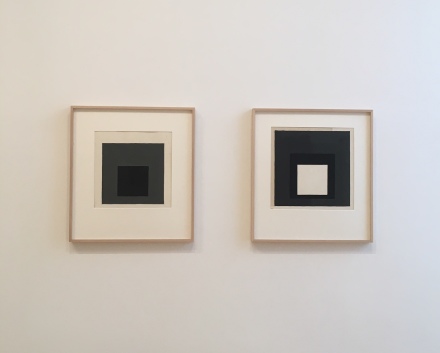 On view at the David Zwirner Gallery, Grey Steps, Grey Scales, Grey Ladders delves into Josef Albers’s life-long exploration of color, form and space, focusing in particular on his works in white, grey and black, and featuring a range of his most acclaimed square paintings, as well as other abstract works from the course of his career.  A highly influential artist in the abstract movements of the early 20th Century, his works, shown in an open conversation, demonstrate the process of creating through rhythm and gradation. 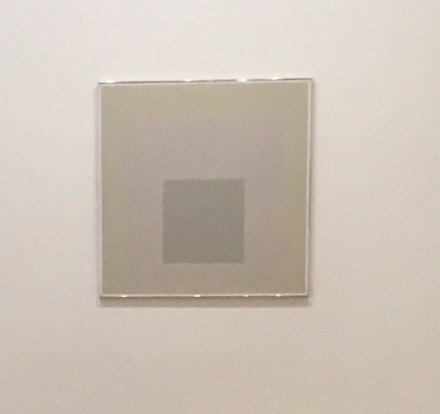 Josef Albers, Homage to the Square [Ephemeral] (1966), via Art Observed

The breadth of the paintings selected for the exhibition reach across the entire span of Albers’s carer, including his first Homage to the Square (1950), as well as several works that followed in the series. Ranging from watercolor and works on paper to several of his later gouache works, the show welcomes a distinct sense of progression and evolution in his work, branching out into reductionist meditations on shape and color as subjects themselves, concepts that traced the trajectory of the artist’s work as he adopted the philosophy and perspective of the Bauhaus. 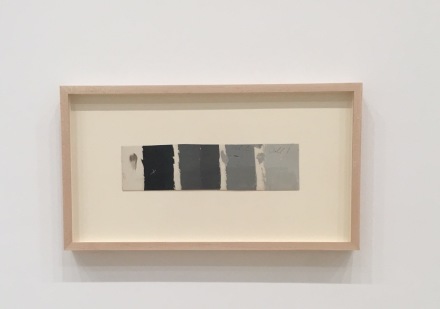 These pursuits are united in Albers’s clear interest in color.  The exhibition’s title is an excerpt from the artist’s much studied treatise, The Interaction of Color (1963), which investigates the perception of color and the effects it often renders on the viewer’s sense of form and space, as well as the colors presented.  A discernment of color may be influenced by the shades around it, and the visual memory of color is more fleeting that that of other senses, he argues, showing the thought processes that undergird the form and function of his square paintings, as well as works like Color Study.  Each explores color through slow, subtle shifts in tone, exhibiting a slow movement through lighter and darker colors in series. These subtle stages evoke the process of “stepping” up and down through colors, much as the exhibition’s title would suggest. 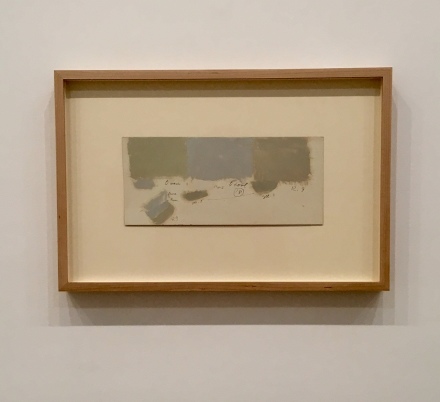 As a result, what would initially appear to be simple alterations between paintings points to Albers’s overall theory regarding color. Slight as these shifts in gradation may be, their influence is evident when viewing the works side by side. Through this reductive, non-objective form, the meaning of the Albers’s work expands, moving from appreciations of color systems from work to work, to an awareness of the show itself as a system of its own.

Equally, Grey Steps, Grey Scales, Grey Ladders, demonstrates the artist’s working process.  Using a palette knife, Albers created geometric forms moving from the inside toward the outer squares of the painting, creating a swelling, alternating effect, one that is rhythmic in their use of color, as if in repetition Albers is able to create a circadian, wavelike motion.  Shown here, David Zwirner’s exhibition casts Albers not only as an influential abstract painter, but also as a masterful operator of systems and concepts, moving his work into open engagements with the environment outside the canvas itself. 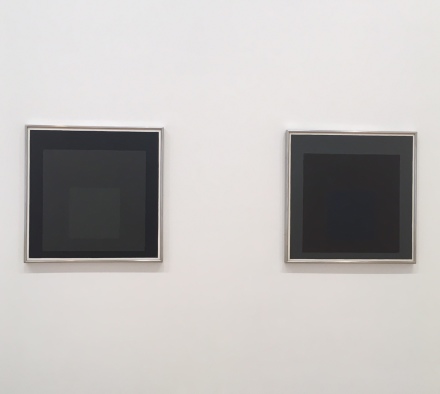 This entry was posted on Saturday, December 17th, 2016 at 12:15 pm and is filed under Art News, Featured Post, Show. You can follow any responses to this entry through the RSS 2.0 feed. You can leave a response, or trackback from your own site.