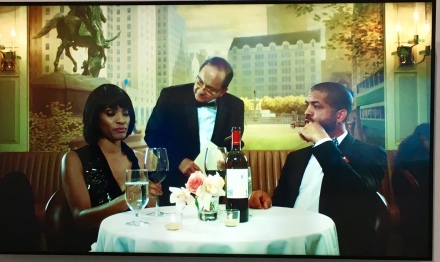 Like much of his previous work, artist Ragnar Kjartansson’s latest exhibition at Luhring Augustine explores a variety of idyllic, everyday moments through a variety of mediums, and spread between the gallery’s two exhibition spaces.   The artist’s work on view in Chelsea draws his series Scenes from Western Culture and Architecture and Morality, while the artist’s work in Bushwick presents a new video piece World Light – The Life and Death of an Artist (2015).  Through an examination of broad themes and varied conceptual focuses, the exhibition draws on the artist’s ongoing interest in literature and pop culture, and their abilities to explore sensations of tranquility, joy and loss.

Scenes from Western Culture, for instance, is comprised of a series of video installations, and seek to dwell on the emotions of the everyday.  Considered by the artist as “cinematic paintings,” the pieces are equally opulent and commonplace, featuring children playing outside, a couple speaking at dinner over wine, or a small boat pulling into a lakeside dock.  The videos play on a loop, clustered together across the walls of two rooms in the gallery, each time exploring various elements of composition and unexpected action that underscore the idyllic and the banal in human relationships. 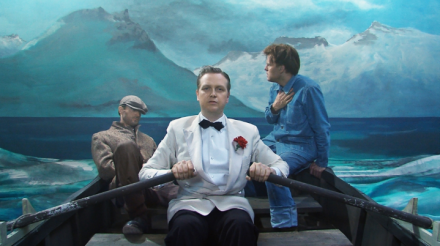 Ragnar Kjartansson, World Light – The Life and Death of an Artist (2015), via Luhring Augustine

Despite his use of the medium of film, the works that Kjartansson creates are non-narrative, often amplifying the quotidian nature of the scenes, as if the viewer has gained a window into an unimportant moment.  This voyeuristic effect creates a sense of intimacy. A bedroom scene of two lovers in embrace provides a particular example of this phenomenon, where the calm nature and steady camera movements of the piece emphasize the unassuming humanity of the pair, isolated and innocent atop a white bed. Despite the detachment inherent in watching strangers, the videos invite the viewer to see remnants of their past self in the pieces, and to explore the similarities to their own lives or memories. 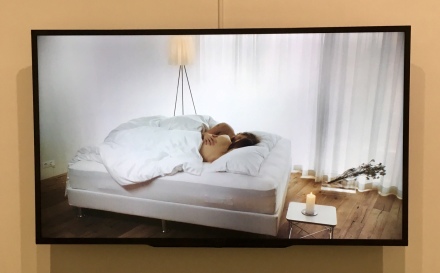 This sense of a shared past creates a tone characteristic of much of the work of the Icelandic artist.  His vignettes are nostalgic in their approach towards a shared sense of beauty, and while his scenes frequently rehash similar threads, they also seem to push towards a sense of disintegration, as the repeated movements and concepts of each film seem to gradually distance themselves from a simple interpretation with each viewing.    We watch as a conversation plays out, as the children’s ball rolls away, but the meaning grows increasingly foreign with each repeated viewing. 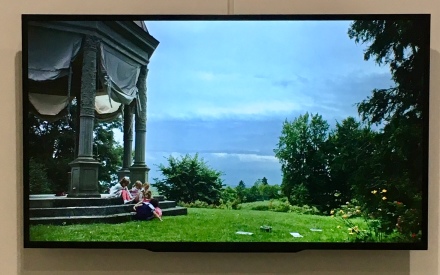 A tragic instability is also evident in the accompanying painted works, Architecture and Morality.  The pieces depict an outsider’s view of homes in the West Bank. Painted en plein air, the series consists of the facades of homes, quaint gas stations, and small parking lots, but given the political instability of the area, the oil paintings also impart a similarly restrained, yet tragic aura.  Within the comfort of the domestic lies a quiet knowledge of its fragility, and the fraught politics that ultimately serve as the foundations for both these homes and Kjartansson’s images. 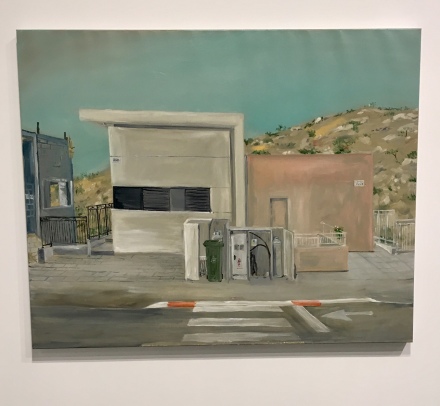 This sense of contextual blending, and the idea of these shared, yet contested senses of history, extends into Kjartansson’s understanding of art as a whole.  Merging performance, video, music, and painting, his background in theatre frequently draws on the viewer’s sense of pathos, and on a careful attention to tone that ultimately drives home an impressive perception of the human condition.  This is perhaps best seen in the work on view at Luhring Augustine’s Bushwick exhibition space.  Drawing on Icelandic literary giant Halldor Laxness’s World Light as his textual source, the artist has rendered an expansive performative work, which frames friends and family in a variety of roles that explore the artist’s path and progress as a reflection of Kjartansson’s life outside of his work.  Drawing on this same sense of the banal as a frame through which one can access Kjartansson as both writer and text, the video is a strikingly in-depth summation of similar threads on view in Manhattan. 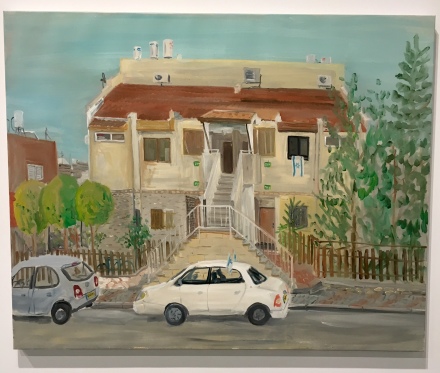 This entry was posted on Thursday, December 22nd, 2016 at 3:14 pm and is filed under Art News, Featured Post, Show. You can follow any responses to this entry through the RSS 2.0 feed. You can leave a response, or trackback from your own site.