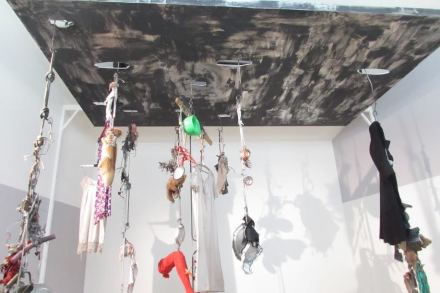 One of the pioneering artists in the concept of kinetics and movement in their works, Jean Tinguely is the subject of an expansive retrospective, Machine Spectacle, currently on view at Amsterdam’s Stedelijk Museum, charting the artist’s creative trajectory and body of work, and highlighting his fascination with movement and formal progression as the focus, rather than the means of his practice.  Using movement and change as modes of critical inquiry, the works on view underscore Tinguely’s understanding of the modern condition, examining capitalist spectacle and modern culture in conjunction with his work’s internal series of aesthetic decisions. 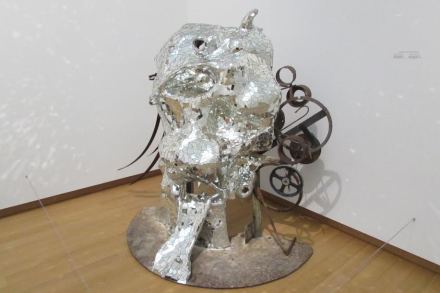 Throughout, Tinguely’s work examines the humanist underpinnings of much of the modern aesthetic project, particularly through the capacities of the machine to generate art in its own right.  This is quite well-illustrated by Meta-matic no. 20 (1959/1960), a work that ultimately prioritizes a machine-based creation of drawings and paintings.  Inherent in this work is the subversion of the notion of the genius: if a machine can produce work that is capable of inspiring the same sense of awe that a genius can, the question of what constitutes artistic genius arises.  More specifically, traditional values of authorship and creativity are undermined in the scope of the machine’s movements, particularly works by the era’s abstract-expressionists, who seem to be a clear target.  Tinguely’s work seems to cast much of modern art’s core values as not only flawed but unnecessary, extraneous, points Tinguely probably regarded as cement for his friendship with Marcel Duchamp. 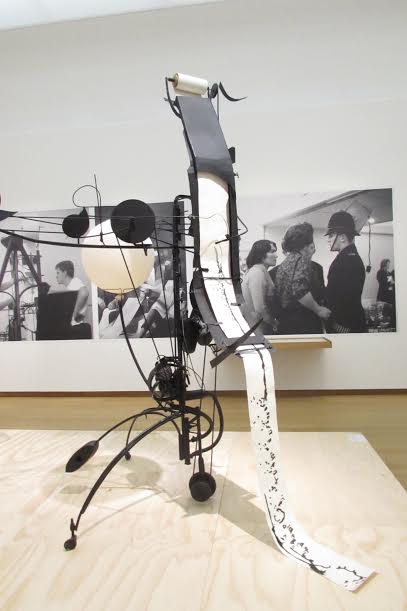 Tinguely’s oeuvre spans from articulating an instance in the destruction of an ideological system, to literal self-destructing installations.  La Vittoria in Print, published by Sergio Tosi, is a long, horizontal pamphlet depicting the burning of a giant machine in the shape of a phallus, a work that took place in Milan in 1970. The storyline of the pictures progresses from the cheeky eruption of fire and smoke to a decorative-looking skeleton of wire that resembles Tinguely’s earliest works.  The stark contrast of black and white in the print pictures anthropomorphizes the phallus-machine, enhancing its tactile qualities but simultaneously peppering the work with a layer of softness and fragility that is affected by the desire.  If a machine as frightening and suggestive as a phallus has a built-in and purposeful flaw, then Tosi’s print almost burdens the viewer with an angle that disrupts a one-sided logic to interpreting Tinguely’s work in turn. 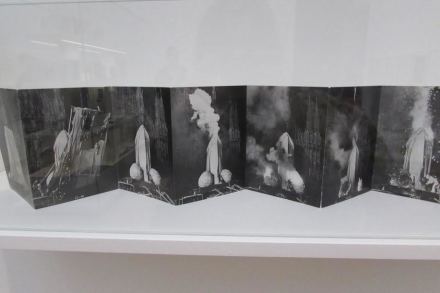 The energy prevalent in Tinguely’s pieces is a hedonistic one.  His moving machines vibrate, often with a sense of sensuous excess, one that aids in the development of a certain sense of individuality for each machine.  There is a communication with the material, physical world that opposes the intangible processes of thought, ones which place the artist in line with the rest of the European avant-garde during the early and mid-20th Century.

While Tinguely stated his moving pieces function in a manner that eventually ‘ends,’ his work functions in a manner that includes the act of painterly process in the final form of the work, extending the painting’s frame of reference through time itself.  As a result, Tinguely’s work takes on an interest with the end of the work’s processes as much as with the act of creation itself, with the visibility of physical movement and its multi-dimensional character, with its own consequences in developing, morphing, or testing a particular threshold of sensibility and sensation in the viewer.

Machine Spectacle is on view until March 5th, 2017 at the Stedelijk Museum.

This entry was posted on Wednesday, January 18th, 2017 at 12:42 pm and is filed under Art News, Featured Post, Show. You can follow any responses to this entry through the RSS 2.0 feed. You can leave a response, or trackback from your own site.