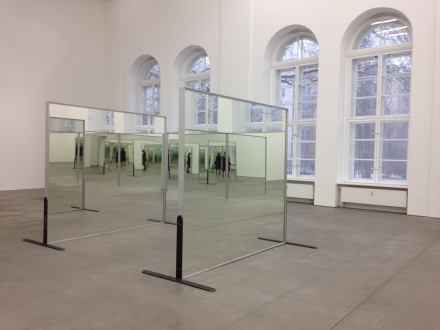 Now through January 14, Sprüth Magers in Berlin is hosting a historical exhibition of works by Robert Morris, exploring a series of six works developed over the course of the artist’s career, and often drawing on the use of mirrors and reflective surfaces to expand the viewer’s perception of space.  Pulling from some of the earliest works in Morris’s conceptual practice up to a work completed in 2014, Refractions traces Morris’s engagement with movement, space and the body, often in relation to the gallery space itself. 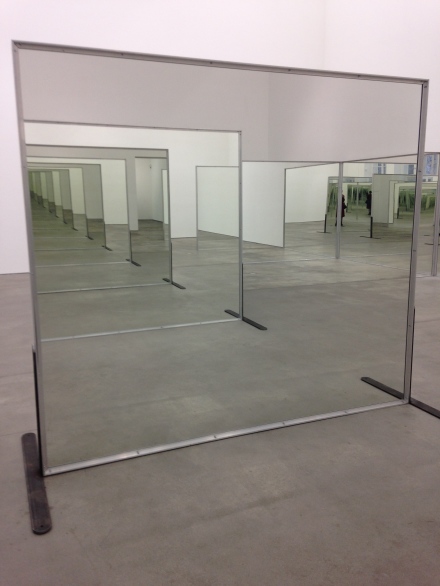 The gallery’s main room is filled with twelve rectangular mirrors, each measuring nearly two and half meters across.  The piece, Untitled (Williams Mirrors) (1976-1977) animates the entire space of the gallery as the viewer moves between and among each vertical surface, with two double-sided pairs positioned in the middle of the room, and four pairs of one-sided mirrors framing the space at its corners.  This ever shifting series of reflections manages to break the viewer’s reflection into a dizzying and disorienting movement of images, turning the viewer’s orientation to the work into a dance of reflections and orientations.  First show in 1977 at the Clark Art Institute during the artist’s time there as Artist-in-Residence, the work and the process of its installation was filmed, in turn becoming an integral part of both the artist’s process and his final work. 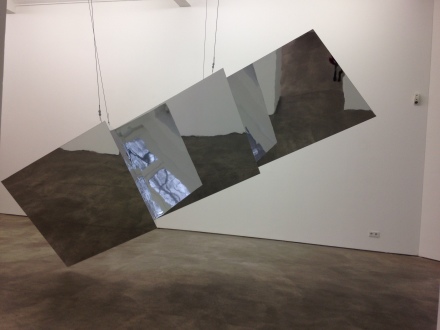 In the next room, the disorienting arrangement of Untitled (Williams Mirrors) is counteracted by pieces that seem to encourage slow and contemplative transitions.  Strike (2012) is a monumental structure, constructed from polished aluminum and arctic birch elements and suspended from the ceiling.  On view for the first time, the piece expresses many of Morris’ longstanding concerns as an artist. The reflection and refraction of the art piece deny any cohesive vision of the space itself, while emphasizing the viewer’s relation to the object through space and time.  Similarly, Untitled (Pine Portal with Mirrors) from 1961 is a frame or “portal” that invites the viewer to literally pass through the work. The interior of the portal is lined with mirrors, suggesting the viewer engage in the act of self-scrutiny while passing from one side of the work to the other, while simultaneously subverting any easy reading of the concept of interiority while inside the work. 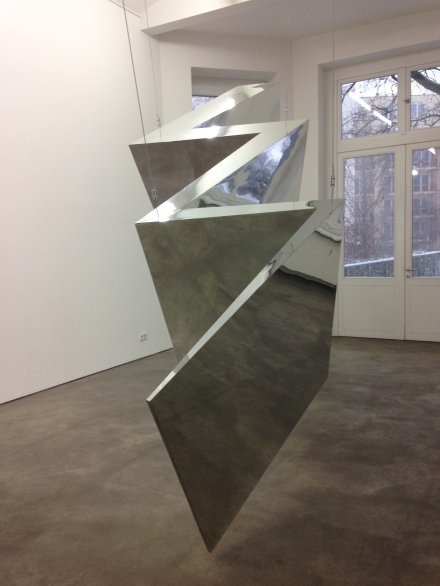 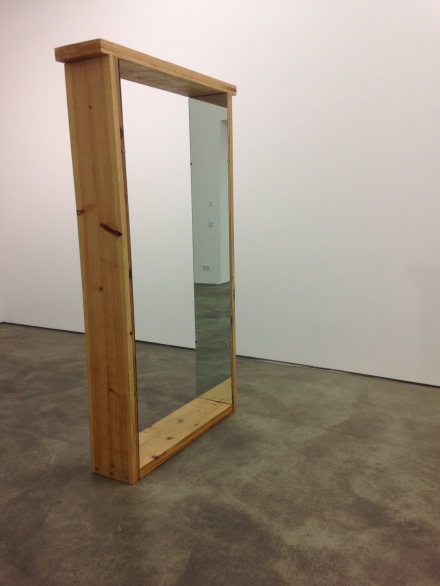 Morris’s work is particularly significant in terms of American contemporary art, and the evolution of more complex modes of thinking in the conception, creation and installation of work in space.  A pioneer of both minimalist and Anti-form movements, Morris’ work spans sculpture, installation, drawing, performance, film and dance, not to mention his numerous critical and theoretical essays on art-making, and the art object over the course of his career.  Since the 1960’s, Morris has developed a unique and singular approach to sculpture that addresses, above all, the process of artistic production. Using adopted industrial materials such as plywood, fiberglass, aluminum, steel and felt, this work seeks to bring this process of production to the fore and reveal it as an essential component to the work itself.  Presented here, Morris’s specific engagement with select materials underscores these interests with impressive efficiency.

This entry was posted on Wednesday, January 11th, 2017 at 6:03 pm and is filed under Art News, Featured Post, Show. You can follow any responses to this entry through the RSS 2.0 feed. You can leave a response, or trackback from your own site.