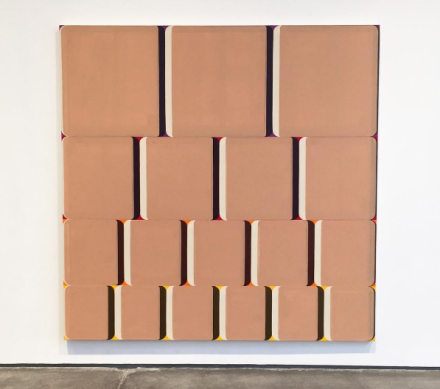 Artist Dan Walsh’s work draws on process as a mode of transcendence, working through canvases through a series of evolving forms and rule-based approaches to the canvas space.  The artist, currently presenting a body of new works at Paula Cooper’s upstairs exhibition space on 21st Street, draws on repetitive, undulating bars of color and expanding forms to create shifting perceptions of space within the closed bounds of the work, or applies similar rules to the deconstruction of the image into a series of lines and dots.

Spread out across the gallery’s two rooms, the show runs through a wide range of Walsh’s varied approaches to the construction of the image.  In some works, artist divides his painted canvas by gradually expanding bars of color, creating a sense of progression akin to that of minimalist sculpture.  The subtle multiplication of marks on the canvas give off a sensation of breathing, as the viewer moves back and forth between larger burst of color and smaller, more numerous forms elsewhere.  Similarly, Lift (2016) draws its sense of movement from subtle adjustments in the width of each band of primary color left on the surface of the work.  Its delicate emphasis on detail creates a sense of movement that manages to elude an initial glimpse at the canvas. 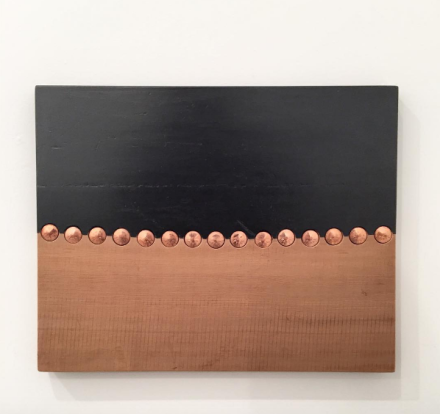 This sense of the image and its construction emphasizes the canvas not only as a realization of the artist’s own pre-determined logic, but equally underscores the interaction of foreign elements and agents with his own hand.  In another series of works, industrial materials are used to trace distinct imprints across the canvas, laid out in a manner that underscores its own role in the composition of the work.  Rather than overlaying or combining their outlines, Walsh is content to trace the image repeatedly across the work’s surface in a manner that creates a dense series of marks and reliefs.  In some, the artist has even drilled bolts into blocks of wood, with the circular movement of the metal piece as it drives itself through the surface.  In this interaction, Walsh’s role in the composition boils down to a singular selection of a point, and the application of pressure, the mechanical movements he sets into motion doing the rest. 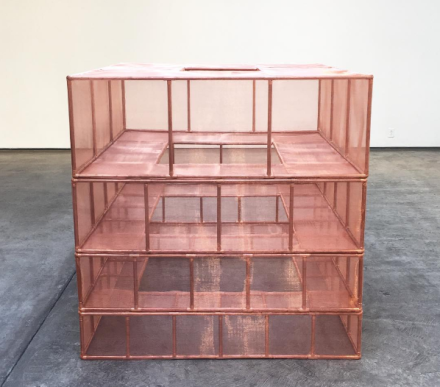 Considering this sense of forward motion, or perhaps the idea of forces set into motion by the artist, Walsh’s coiled rope sculpture offers a notable condensation of his work.  Following the natural progression of the rope to its natural conclusion, Walsh seems to reach towards the furthest limits of the artist’s ability, choosing a material that brings these boundaries closer into view.

Walsh’s work is on view through February 4th. 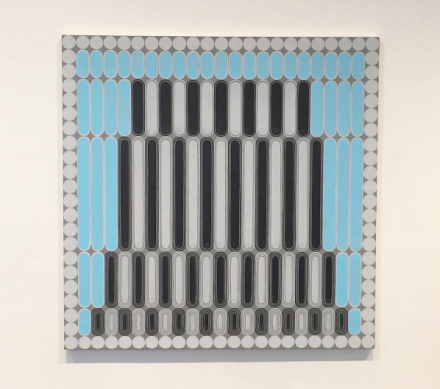 This entry was posted on Sunday, January 29th, 2017 at 12:39 pm and is filed under Art News, Featured Post, Show. You can follow any responses to this entry through the RSS 2.0 feed. You can leave a response, or trackback from your own site.