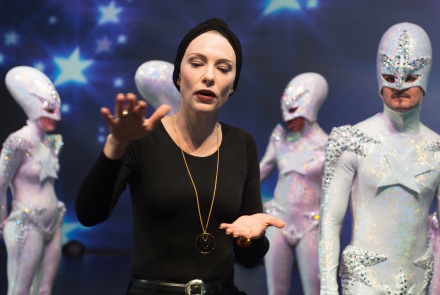 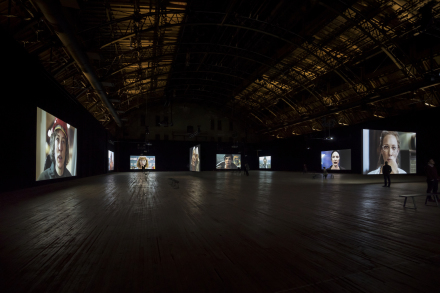 The Australian powerhouse, who is known for her physically and emotionally transformative roles in film and theatre, stars in a series of thirteen different short-videos, each time appearing as a different character or figure.  Each narrative incorporates excerpts from canonized manifestos of the 19th, 20th century and 21st Century, including Marx and Engel’s Manifesto of the Communist Party, Jim Jarmusch’s Golden Rules of Filmmaking or Guy Debord’s Situationist Manifesto. One of the most striking scenes presents Blanchett as a homeless man roaming around ruins of a dystopian city, murmuring snippets of Lucio Fontana’s White Manifesto and bellowing other line over the rooftops. 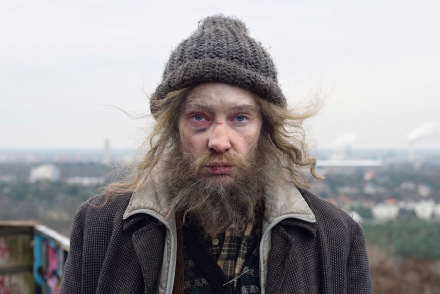 Known for his ambitious, large-scale video installations that merge film and theater with video art, Rosefeldt orchestrates fluid mise-en-scènes, in which easy modes of reasoning are subverted, and his playing towards cinematic realism starts to fade.  Such shifts towards absurdity infuses the scenes here with a sense of contrast between mundane situations, as his protagonists punctuate domestic and commercial scenes in with the anarchic and often poetic tones of each recited manifestos. 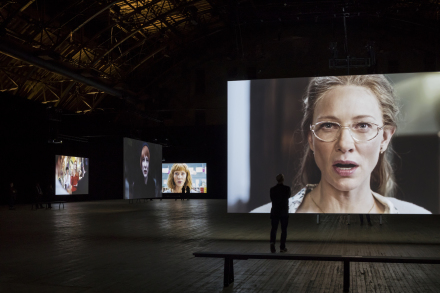 The Berlin-based artist weaves everyday life and distinct proclamations into sequences of bizarre tales, evolving ordinary fragments from random occasions into unexpected declarations on critical thinking. “I am for art that you can sit on. I am for art you can pick your nose with or stub your toes on,” prays the wife and mother of three at the lunch table, conveying Claes Oldenburg’s Pop Art manifesto I am for an Art.  As the camera pans over ebony-heavy furniture and taxidermies in their suburban house, the character’s devotion to her prayer/manifesto and the expected accompaniment of her husband and children seems to ridicule both her speech and the archetype she plays, framed as “conservative mother with family” in the exhibition catalog. 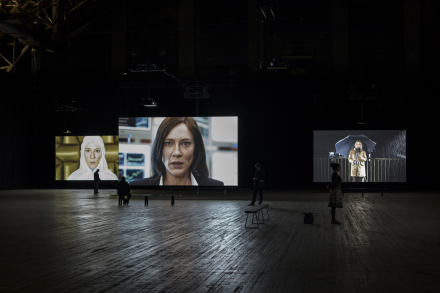 Wandering around each scene, and hearing each version of Blanchett speak, almost hypnotized under the impact of their declarations, triggers one to consider the contemporary prominence of such manifestos that are almost entirely written by white European men.  Employed by politicians and commercial managers alike, such declarative rhetoric inevitably perpetuates authoritarian ideologies, particularly considering the current political climate prevailing the globe.  As Blanchett examines alternative framings and contexts for each of these manifestos, ones the original text may have aimed to subvert or attack, or perhaps had not even considered, the films ultimately draw limits around each text, rather than underscore the universality so many seem to call for. 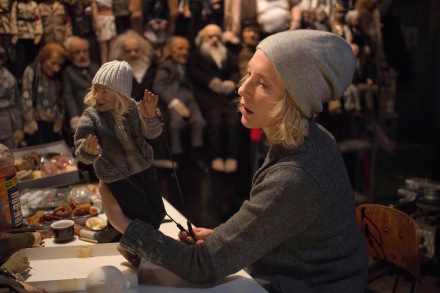 On the other hand, while characters—ranging from a demanding choreographer to a worker at a garbage incineration plant—socially and economically vary, ideological relativities between manifestos surface, although conceived in separate decades. “Nothing is original,” assures the school teacher to her students who attentively listen to her ideas on authenticity and artistic language at an elementary school in the final scene concluding the installation, underlining the interconnectedness of creative thinking manifested throughout the absorbing installation, and the shared hopes for a more enlightened, socially-engaged art for the time just beyond the horizon of its original author.

Julian Rosefeldt: Manifesto is on view at Park Avenue Armory through January 8, 2017.

This entry was posted on Friday, January 6th, 2017 at 10:55 am and is filed under Art News, Featured Post, Show. You can follow any responses to this entry through the RSS 2.0 feed. You can leave a response, or trackback from your own site.