The Philosophy of Andy Warhol (From A to B and Back Again)
(Andy Warhol, 1977)
Read More and Buy↠
Home » New York — “Warhol, Wool, Guyton” at Nahmad Contemporary Through January 14th, 2017 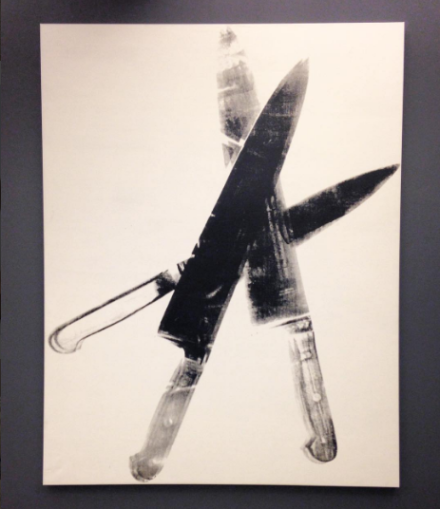 Andy Warhol, Knives (1981-82), All images are by Osman Can Yerebakan for Art Observed

Nahmad Contemporary is currently presenting an impressive three-person exhibition at its Madison Ave exhibition space, contextualizing the work of both Christopher Wool and Wade Guyton through the artistic lens of Andy Warhol, making the latter artist’s impact all the more apparent in the work of the former two.  Combining the appropriation of existing imagery and the borrowed aesthetics of mainstream commercial imagery with a certain sense of spare visual arrangement, the show is a striking visual tour de force, connecting diverse focal points and concepts over a shared sense of composition and technique, especially in the sense of the gallery space as a transformational context. 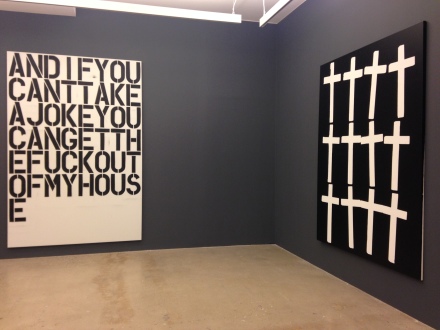 Beginning in 1978, when Warhol began his abstracted Shadows series, and concluding with Guyton’s recent inkjet stripes drawn from digital and manual image manipulation, the exhibition spans three artists’ efforts at dismantling representative and physical foundations within and around the sourced image.  While Warhol’s initial work relied on a certain dismissal of his figurative silkscreens as his work progressed, his inspiration from pop culture and the modes of rapid image production remained at the center of his work.  He transformed shadows cast by the objects in his work space into semi-abstract forms, containing loose blots of paint and precise lines that echoed the objects they purport to represent.  His Eggs, Knives, and Crosses series, by turn, integrates his use of vibrant colors and prints capturing commercial objects into new experiments with digital technology, reflecting Warhol’s recurring themes of devotion, consumerism, and the everyday, while signaling his inclination towards emerging technological potentials towards constructing and producing images. 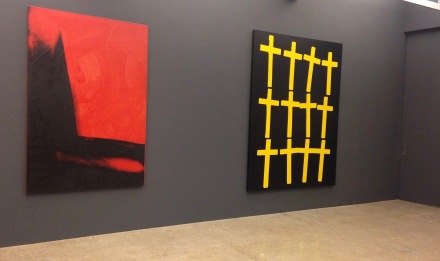 By turns, the exhibition underlines Wool’s interest in deconstructing the physical and ideological foundations of the image, and allows Warhol’s work to emphasize its own visceral expressivity.  Wool’s text works, painted on aluminum panels and drawing on observations of everyday language and routines, notes an intervention in traditional art production, with inquisitive approaches to color and form tracing his embrace of chance and spontaneity in the work’s final form.

Similarly, Wade Guyton’s work with an Epson UltraChrome printer is presented alongside his print-making predecessors, pieces frequently drawing on the same approach to borrowed subject matter printed across his canvases, while bearing the marks of manipulation or technological failure in the production of the final work.  Much like Warhol’s long engagement with screen-printing, and Wool’s allowance of momentary flaws and glitches in his image, Guyton’s experiments allow unforeseen circumstances and occurrences on linen to participate in the formulation of the final piece.  Guyton experiments with unforeseen occurrences on linen as result of often times intentional alterations of his techniques. His meditations on the letter ‘X’ or the fading black stripes of his works gain further resonance when placed against the similarly blotchy, quickly produced imagery of his fellow artists, projecting a broader context for understanding image culture.

Warhol, Wool, Guyton is on view at Nahmad Contemporary through January 14th, 2017. 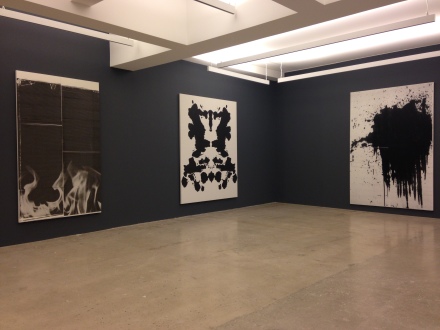 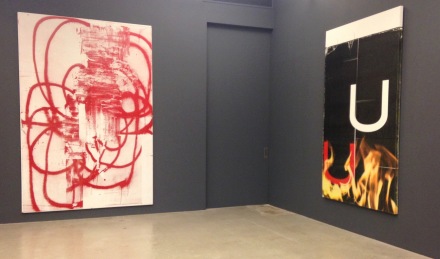 This entry was posted on Thursday, January 12th, 2017 at 12:58 pm and is filed under Art News, Featured Post, Show. You can follow any responses to this entry through the RSS 2.0 feed. You can leave a response, or trackback from your own site.