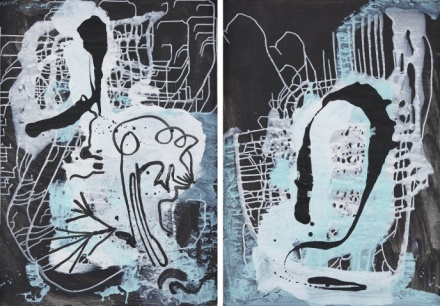 Marking a timely overlap with the artist’s February 13th birthday, Michael Werner Gallery is currently showing a series of paintings from Sigmar Polke’s Pour series, delving into the artist’s relentlessly inventive and exploratory approach to the canvas.  Primarily focused around works from the later years of the artist’s career, particularly the late 1990’s, the gallery exhibition also welcomes a deeper engagement with time, offering several early works drawing on techniques that Polke would later expand on, underlining his expansive and often self-reflective inclinations towards his own body of work. 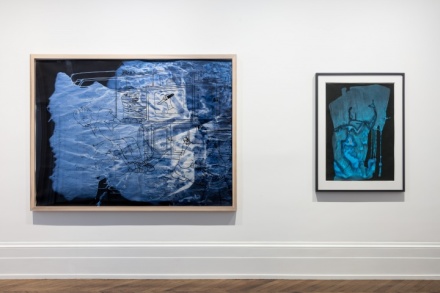 The Pour Paintings are formed from a simple conceit: cascades of paint dropped over the surface of the canvas in a manner that allows gravity to do its work.  Their fluid forms belie the artist’s manipulation of the canvas itself, pointing towards sudden tilts, rotations and other twists in position that create the impression of ghostly, serpentine pathways across its surface.  Yet these initial actions also serve as moments for interaction and interruption by the artist, tracing new forms and illustrations over these pools of paint that create the sense of fading memories and alien landscapes in conjunction with the often banal, or subtly disturbing, scenes depicted.  In one untitled piece, a group of teenagers stare blankly at a television, on which a lone hand holding a knife plays out.  The staid scene and its violent focal point are added additional tension by the rippling textures of the paint underneath. 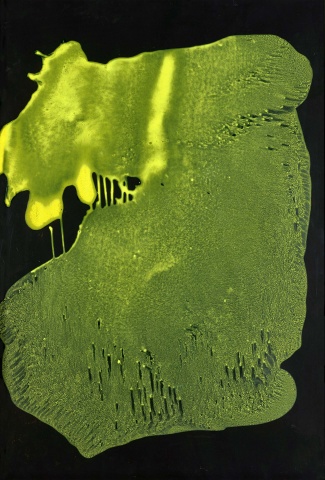 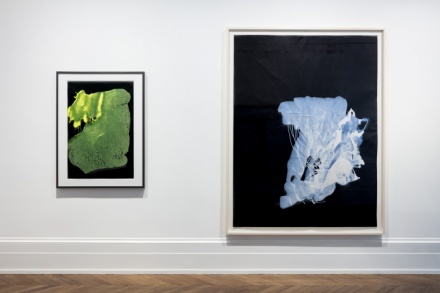 Polke’s engagement with paint as both surface and subject is a notable thread here, one that ties him to his fellow post-war pioneer Gerhard Richter.  Yet as Richter’s work frequently distills this sense of the image as object (and vice versa) down to its most essential operations, Polke’s work approaches both sides as platforms for further engagement.  One of the earliest works on view, an untitled piece from 1985, uses wet paint as a space for Polke to trace new lines and forms, creating dense layers and overlaps of form that pull the viewer deeper into the artist’s engagement with the canvas.  For Polke, the pour paintings offer a distinct summation of his own own formal politics, a perception of the canvas as an ever-evolving series of gestural actions and intersections that often teeter on the edge of legibility or disintegration.  Reflecting on a body of work executed in the last decade and a half of the artist’s life, the show at Michael Werner offers a tight lens through which to view the often expansive thematic elements of Polke’s diverse, and often challenging, body of work.

The exhibition is on view through March 4th. 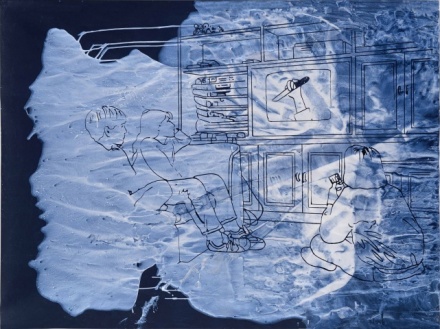 This entry was posted on Thursday, February 23rd, 2017 at 1:38 pm and is filed under Art News, Featured Post, Show. You can follow any responses to this entry through the RSS 2.0 feed. You can leave a response, or trackback from your own site.