Paris— Jean-Luc Moulène at The Centre Pompidou Through February 20th, 2017 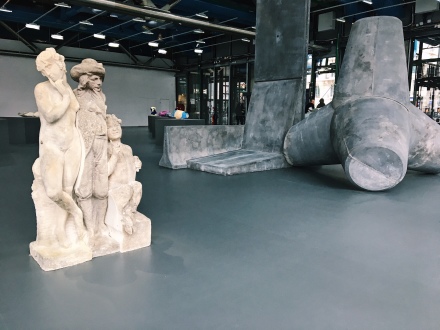 To walk through Jean-Luc Moulène’s retrospective at The Centre Pompidou is to traverse through a wasteland of fossils and discarded matter, a history of repurposed and spliced objects placed into an ever-evolving series of dialogues and interactions.  Giving off subtle senses of a dystopian, simulated future, the artist’s sculptures play on a suspended sense of reality, often challenging its role as constructed object or sourced material that plays on a rupture between past, present and future, disrupting easy legibility while staging a site where these divergent sensations are allowed to co-exist.

Beginning his career with large-format photography, the Paris-based artist first made a name for himself by exhibiting works that had subtle political inclinations, and has continued to develop a practice that explores the various interactions of material and contextual notes that give his selected objects their sense of resonance in the broader systems of relation that define the world at large.  Invited to organize his own retrospective, Moulène offers a ‘retrospective of protocols’ here, presenting around thirty new works that offer the viewer insight into his artistic investigations and exploration of matter. Creating ‘protocols’ fashioned by hand alongside those rendered by industrial design technologies, each piece has a certain preciseness, drawing on mathematics and specifically set theory to examine themes of intersectionality, laterality and spatial tensions. 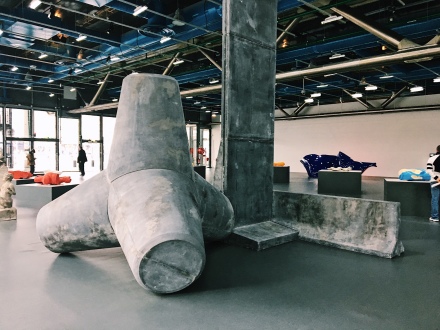 A study of  shared space, public space and the energy between objects and viewer, the artist’s works engage in a continued dialogue with each other, often using their engagement with aesthetic design and technology to present a uniquely rendered aura.  Ranging in scale from Bubugulu (2015-2016) to No, no, no [Non, non, non] (2016), which towers over the viewer and touches the ceiling of the industrial gallery space, the exhibition’s works are laid out in a manner that welcomes visitors to journey through he space, following their own chosen paths and interpretations of the works’ shared themes and techniques, drawing connections and ideas between works based on their chosen pathways.  Moulène stresses the importance of his artistic program, and the ability to use each work as a tool to understand its neighboring bodies, drawing upon elements of art history and human history to create visual narratives, ones that interrogate time and memory through their constant shifts in context and correlation. 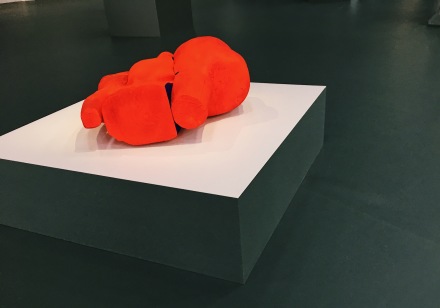 Composed of mixed media sculptures, memorabilia and video works, the exhibition is reminiscent of a cabinet of curiosities.  Like the Renaissance-era rooms that housed encyclopedic collections of objects drawn from the fields of natural history, geology, archaeology, antiquities and art, Moulène’s room of ‘protocols’ features works which constantly explore and compare loaded histories.  The textural breadth of the objects vary, from plastic items to those suggestive of traditional earthen wares.  His color palette is open as well, with brightly saturated blues, set against grey concrete, set against purples, whites, turquoises, pinks and oranges, often executed with strong allusions to the range of contemporary art history.

Moulène’s anthropomorphic vessels are made by montaging and cutting existing cultural elements, forming them into new contemporary objects through a range of thoughtful and intentional gestures, often exploring concepts of mastery and authorship to create works for the future.  Sampling visual idioms from other artists alongside objects associated with the realm of the everyday he creates a forum to forge connections, fostering intersections between objects and themselves and their observations to find a “common space.”  He explains; “man is necessarily foreign in this space: he is welcome, yet foreign.”

A true fusion of art, science and technology Moulène’s exhibition extends into the Paris landscape and urban environment. The open exhibition space, with glass windows looking out to the streets below, seems a wholly fitting place to host works that constantly draw on (and redraw), the spatial contexts and political moorings from whence they came.

Jean-Luc Moulène’s retrospective is on view through February 20th.

This entry was posted on Saturday, February 18th, 2017 at 10:16 pm and is filed under Art News, Featured Post, Show. You can follow any responses to this entry through the RSS 2.0 feed. You can leave a response, or trackback from your own site.