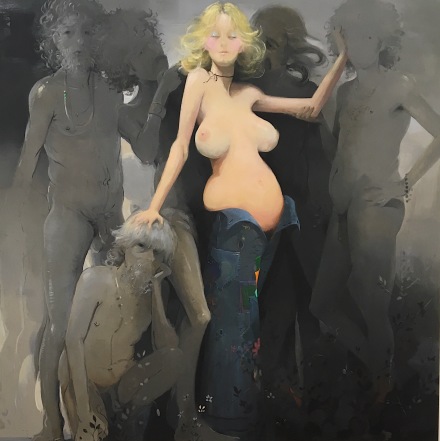 On view at David Zwirner Gallery‘s London exhibition space, now through July 28th, is a new series of new paintings by Lisa Yuskavage.  Often associated with the re-emergence of figuration in contemporary painting, Yuskavage’s work is noted for its psychedelic, colorfully vibrant style, and its often sexually-charged subject matter. Her paintings embody a unique genre of portraiture—a blending of imagined and contemporary subjects set against classical tropes and icons of human sexuality. In this series, Yuskavage draws upon the world of American hippies, where slinky, bodacious women lounge about and cavort with semi-nude men. It is worth noting that while the hyper-sexualized women remain the dominant characters, the inclusion of men in her work is a fairly new departure for Yuskavage. 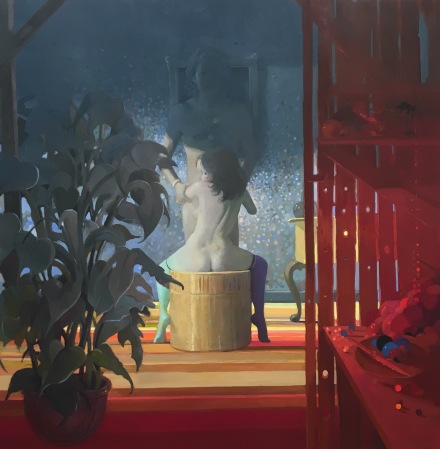 While Yuskavage’s subject matter may be considered risqué to some, she employs relatively traditional painting techniques, and her work with the feminine nude falls within a long history of art historical studies regarding the female form and sexuality.  Her particular focus on reclaiming female empowerment and ownership through sexual dominance and a shifted primacy on the male gaze has a place within a feminist, revisionist working of the art historical canon. In a pastel wash, her angelic and fantastical women exist as the center of attention for their unique worlds. Yuskavage’s women have a keen sense of their own sexual agency— whether standing proudly in the nude, exhibiting their bodies, touching their breasts, or taking pleasure in their own form. 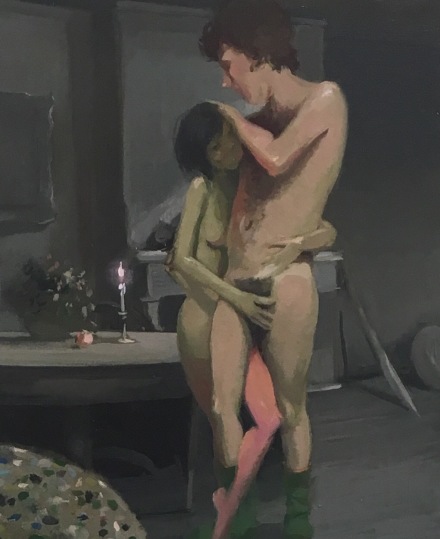 Through color, Yuskavage explores psychological constructs and the nuanced dynamics between the figures in her paintings. Alternating between vibrant hues and murkier greys, Yuskavage highlights both the symbiotic interactions between the men and women and their sometimes isolated experiences. In Déjà Vu (2017), a bulbous, semi-nude woman stands proudly amongst a grouping of nude men. Her relaxed posture is both alluring and confident, with her languid form rendered with light shades and an application of paint that is finished with fine touches. In comparison, the men who surround her are drawn rather sketchily and in grey hues. While this woman is literally the central figure, the application of color also distinguishes her role as an ethereal character. Some of the men direct their attention towards their female counterpart, while three of them look out of the picture plane. These direct gazes, in conjunction with the woman’s frontal stance and the large scale of the painting invite the viewer to engage with the group. However, the inclusion of full male nudity, particularly against a partially clothed woman, is unique in the history of painting. While many artists have examined the nude female form it is rather rare for artists to depict men in such a manner. Additionally, the traditional gender roles are reversed as the female figure holds the sexual power, particularly as she gently strokes one man’s face and another man’s head. 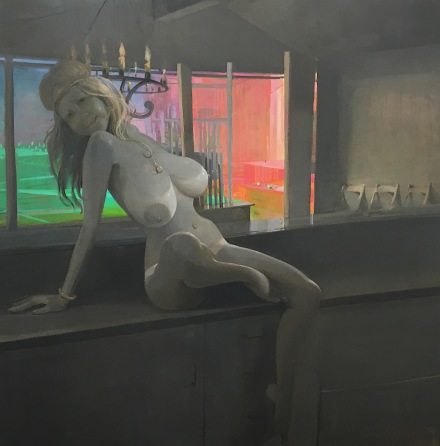 While gaze is the connecting link between the figures in Déjà Vu (2017), color and touch unite the pair in Ludlow Street Couple (2017). The intertwined man and woman are both rendered in color, which is offset to their natural background. Unlike in Déjà Vu (2017), the pair directly engage with each other and seem unaware of the viewer. In Lovers (2016) the pair also seem unaware of the viewer, and are even placed offset in the background. A woman sits nude, aside from a pair of socks, with her legs spread and her lover standing between them. The man looks straight out, but as the lighting gets darker as the picture plane moves up, his face is indistinct. The attention of the light falls onto the woman’s body, particularly her buttocks. While in the foreground the inclusion of plants and a basket of brightly red and ripe fruits parallel the sexual act taking place and are suggestive of lust. 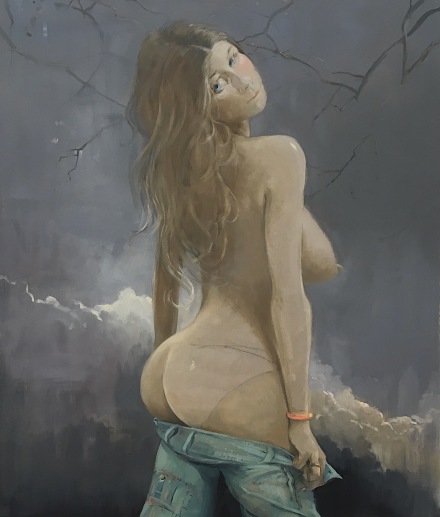 While a focus of the exhibition is on the interactions between men and women, Yuskavage also includes a number of portraits of women alone. In Housewarming (2016) a fully nude woman sits openly on a kitchen counter top. There is a sensual arch to her feet which is matched by her arching back and playful and inviting expression. However, the woman and the room are rendered in matte grey tones, while the focus in regard to color is drawn to the technicolor landscape through the door and windows in the back, drawing on traditional gender roles and their dissonance with the image itself to comment wryly on the woman’s “place in the home.” 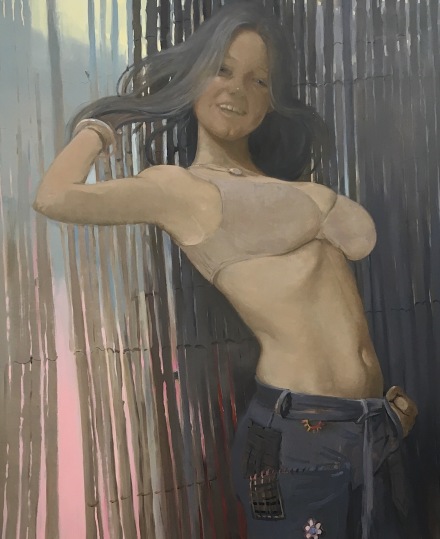 In (Nude) Hippie (2016) and Hippie (Nude Bra), women stand alone in various levels of undress. Both with denim jeans and off-set to fantastical environments each woman draws attention to her breasts and buttons through gesture. Drawing upon the loose sexual associations with hippies, Yuskavage’s women have long, flowing hair and a nonchalant attitude. Throughout all of the works there is a relaxed nature to the characters and a sense of both real individuals and also fantastical beings.

Lisa Yuskavage’s work is on view at David Zwirner through July 28th, 2017.

This entry was posted on Friday, July 21st, 2017 at 12:34 pm and is filed under Art News, Featured Post, Show. You can follow any responses to this entry through the RSS 2.0 feed. You can leave a response, or trackback from your own site.