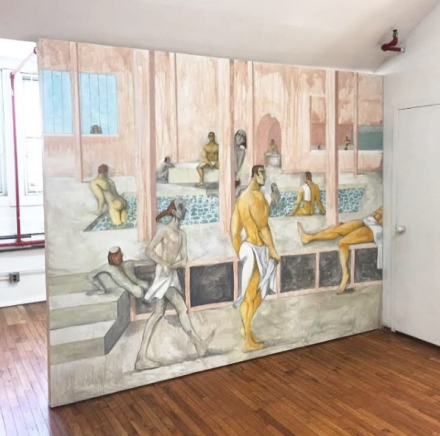 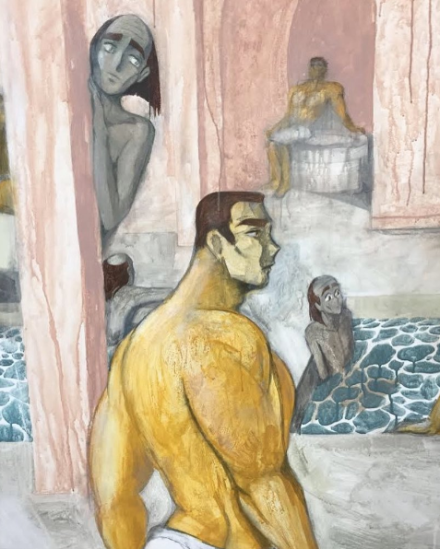 The entrance room of the fourth floor exhibition space is segmented by the addition of a large wall, which has been adorned with a mural. While Ceccaldi often includes wall-paintings in his exhibitions, this mural, Pompeii Bathhouse, has the most packed narrative to date. Depicting an interior scene within a men’s spa, there is no shortage of hairless (and sometimes muscular bodies) coalescing in the water, posing suggestively, and staring longingly at one another. The population of the bathhouses is composed of two groups: the alphas, and the betas. The alpha males that have a golden, almost cartoonish yellow hue to their skin. They emit confidence and exude vapidity. On the other side of the coin are the lean, grey, corpse-like beta boys. They hide behind pillars and staircases, sneaking voyeuristic glimpses at the unaware, or at least unconcerned, alpha males. They clutch nervously at their own towels, gazing at their fellow bathers, charging the composition with both sexual tension and subtle power dynamics. 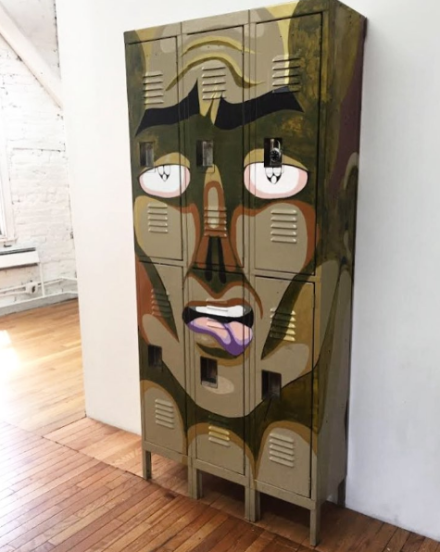 Moving outward from the mural and into the gallery, there are two matrixes of six lockers, each painted with Ceccaldi’s uniquely stylized hand. The locker room, like the bathhouse, is a loaded environment of homoeroticism. Repulsed Face Locker, portrays the “drunk on lust” gaze of a grey beta male. His pinkish-purple tongue hangs limply from his open mouth – a phallic suggestion that echoes Ceccaldi’s broader narratives of lust and longing. The locker also works as a mechanistic metaphor for closeted homosexuality. True to his chosen subject matter, the bathhouse’s long history as an open space of male homosexuality is transferred here into a charged physical architecture. The façade of the locker is uniform and nondescript – identical in build to the accompanying lockers. Yet locked within this characterless shell, are the unique articles that make up an individual’s identity. This idea driven home in the second locker work, Praying Skeleton. The top left locker remains open, exposing a figure painted in the interior of the locker – the sole female body in the show. 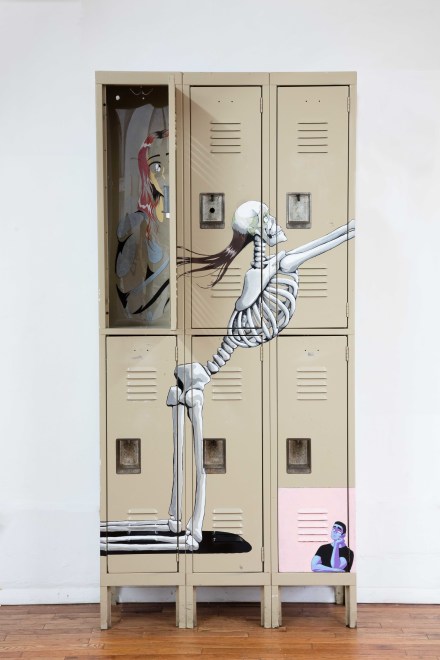 There are several framed wall works in the exhibition, all of which are acrylic on polyester film. Like animation cels, Ceccaldi’s paintings are done on several successive layers of polyester film. Ceccaldi’s drafting style has always flirted with the aesthetics of Japanese manga and anime, so it’s quite  fitting of him to adapt a process typical of classical animation into his own practice. 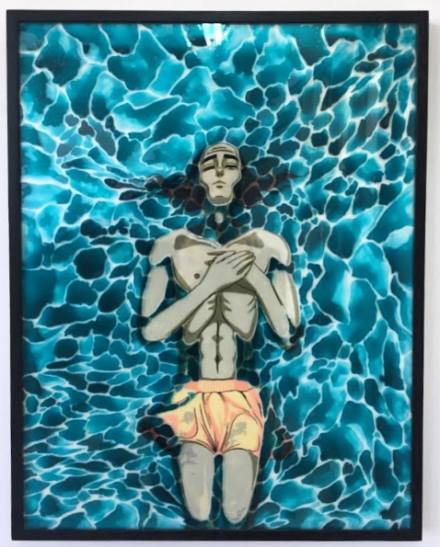 Like Pompeii Bathhouse, the wall works continue to illustrate the tension between the dom/sub friction between the physically endowed and the physically deprived. In Volcanic Tea Room, for instance a tall and robust man uses  the urinal directly adjacent to the one being used by a tiny man in a purple sweater. They are the only two bodies in the bathroom, yet they are shoulder to shoulder. The timid male wears long sleeves and slacks, urinating by unzipping his fly, while the burly figure to his left takes a more puerile approach, his pants pulled down. Not surprisingly, the beta can be seen yearningly staring at the alpha, transposing the lustful vigor of classic erotica towards a language of repression and sustained tension. Just behind the urinals is a mural of Mt Vesuvius erupting. Pompeii, infamous for its volcanic demise, was both home to multiple bathhouses and countless depictions of phalluses throughout the island. It makes for a fitting metaphor to the dramatic, and often destructive, climax caused by letting inhibitions finally run wild. Sometimes it is safer to fantasize, like the solitary figure in Sinking Swimmer. Enveloped in water, the man floats on his back, eyes closed; a picture of bliss. The daydreamer is safe – fantasies have happy endings .

This entry was posted on Thursday, August 17th, 2017 at 7:01 pm and is filed under Art News, Featured Post, Show. You can follow any responses to this entry through the RSS 2.0 feed. You can leave a response, or trackback from your own site.