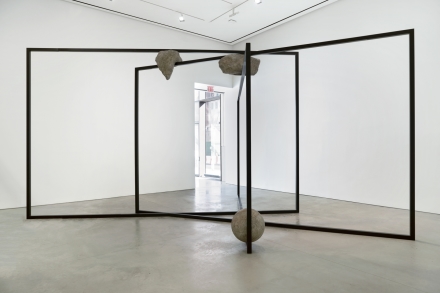 Working with concepts of nature, science, philosophy and perception, artist Alicja Kwade’s work draws on complex fusions of phenomena, space and architecture, using these formats to question and explore the natural world alongside humanity’s participation in it. Drawing on reflective elements, spatial inversions and peculiar material juxtapositions, the artist has become renowned for her ability to challenge our most basic logical assumptions. 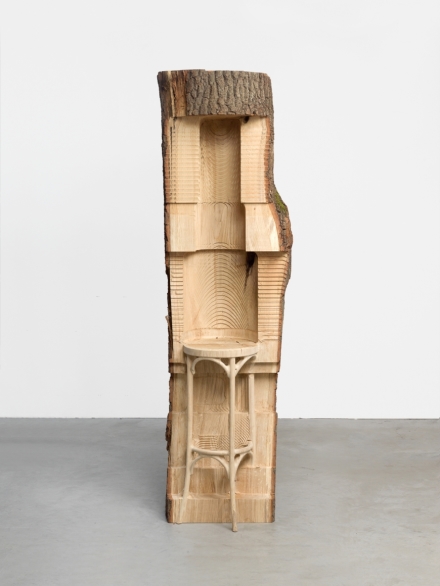 Such is the case once again at Kwade’s recently opened exhibition at 303 Gallery in New York, returning to the iconographies of nature as a tool to investigate senses and awareness, opening fissures in which we may rethink the world around us as well as our place in it. Drawing on the language of minimalism, Kwade’s work seeks to move beyond formal concerns, utilizing similar strategies to the historical movement in order to pursue a dissolution of an object’s materiality. This is well-illustrated in MatterMotion (2019), a freestanding sculpture made of interlocking steel frames, weighted with three stones. Upon further examination, these stones reveal themselves as identical copies in varying shapes and thus different conditions. The boulder seems to lose its characteristic form and materiality, negating familiar physical laws. As the viewer passes through this framework, the experience of seeing gives these objects and elements a sense of oscillation between image and object, suspended in a network of inputs that renders a new framing of reality that floats between states. 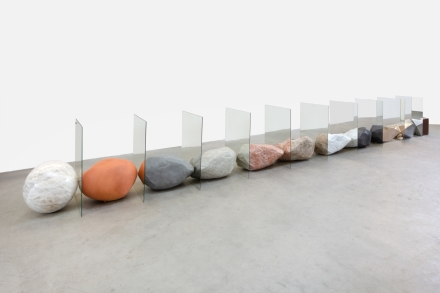 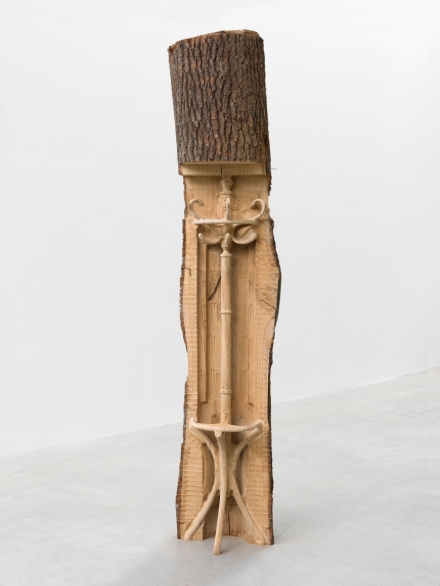 Kwade’s collapsing realities are furthered through her manipulation of nature and science in Trans-For-Men 11 (Fibonacci) (2019), which sees her replicating a boulder undergoing a visual transformation through 3D technology. The work contains eleven states of the stone arranged along the floor, with the original form in the center. Starting from this prototypical boulder while maintaining the same volume in each element, at one side of the row the stones are continuously reduced to a cube, while the other side sees a steady increase in information towards a perfected sphere. The Fibonacci sequence determines the exact shape of each phase, a Golden Ratio actualized. The stones represent themselves and all possibilities in between, a paean to the malleability of the natural world. Kwade’s work, presenting an object in flux that simultaneously looks back on its own transformation and alteration, is a fitting exclamation point on the show, delving into the creation and expression of both mathematical principles and environmental forms, each employed in concert to create a broader understanding of the world around us.

The show closes May 18th.

This entry was posted on Thursday, April 18th, 2019 at 3:24 pm and is filed under Art News, Featured Post, Show. You can follow any responses to this entry through the RSS 2.0 feed. You can leave a response, or trackback from your own site.