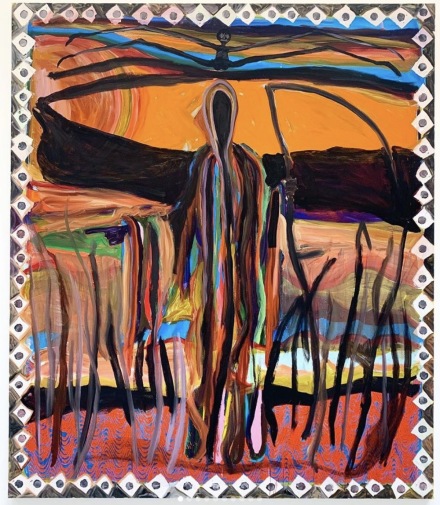 Marking his first solo presentation with David Zwirner Gallery this month in New York, painter Josh Smith has unfurled a sprawling body of new work at the gallery’s Chelsea exhibition space, bringing together a range of new graphical gestures and classic explorations in pursuit of an ever-evolving visual language. 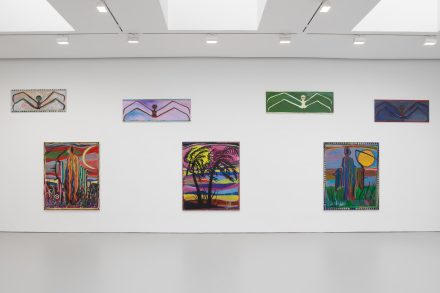 Since the early 2000s, Smith has built a reputation for himself as an prolific painter, delving into specific graphical motifs and repeated investigations of images, symbols and figures that seems to hint at a near-meditative sense of repetition and evolution, as if using practiced, familiar forms as a way to delve ever deeper into the possibilities and capabilities of the painted canvas. Among his regularly used images are palm trees, fish, leaves, and even his own name, rendering each element in a trademark loping, easy hand that gives the works gentle waves of color and a fascinatingly balanced approach to the space of the canvas. These are simple, elegant forms that allow the viewer to take them in as pictures, but also to quickly move past them to dwell on the brushstrokes themselves. Smith pursues his investigation of the medium through these cool signifiers, resulting in works that forthrightly present themselves to the viewer. Though fully realized as individual artworks, each painting serves as a stage in an ongoing, interrelated, and heterogeneous process of image production and experimentation, in which motifs, colors, and visuals are recycled, refined, and reimagined. 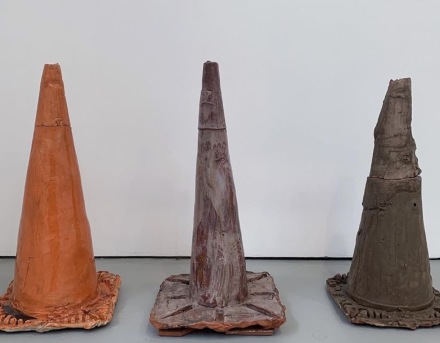 This new show, Emo Jungle, features an array of new paintings by the artist, including several new “Reaper” paintings, part of an ongoing series that depicts the figure of death, yet illustrated in a series of in lush ribbons and fields of color that give the characteristic blank, empty faces and shapeless cloaks of the reapers a new life. Adorned with decorative borders recalling the history of American decorative arts, the works draw on a range of signifiers that ultimately see the various threads dissolve under the weight of its disparate threads. 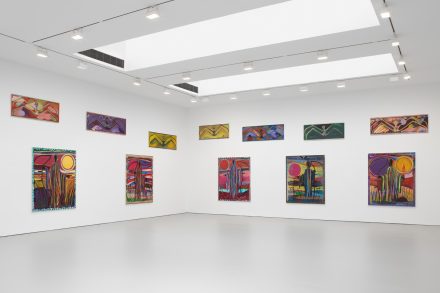 The artist has also brought a new body of motifs for his show this month, including a devil character painted with a paintbrush in hand, reaching to the corners and margins of the canvases, self-reflexively painting himself into the compositions, as well as “Human Animals” , which features primate-like creatures whose long limbs seem to stretch and determine the margins of the wide rectangular works. Smith also depicts a series of turtles in the show, an even more simple graphical figure than works presented elsewhere, at least by the artist’s admission. The reptiles are presented as a figure literally unburdened with the meanings of the human figure, allowing an even quicker route to the presentation and appreciation of the work. 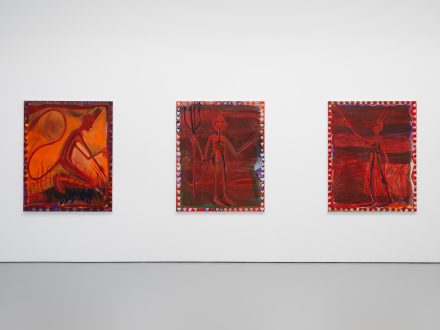 Taken together, the show is a striking investigation of the joy of looking, of the appreciation and consideration of Smith’s pictures not only as assemblages of movements and observations, but literally of material, the image floating somewhere far off while the paint itself remains close at hand.

This entry was posted on Monday, June 3rd, 2019 at 2:29 pm and is filed under Art News, Featured Post, Show. You can follow any responses to this entry through the RSS 2.0 feed. You can leave a response, or trackback from your own site.