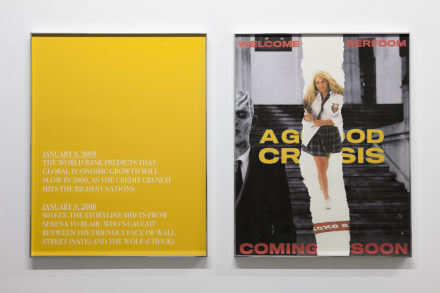 The New York collective Dis has long reveled in a mixture of the politically-incisive and the socially-mischievous, putting further a body of work that dwells on revolution and change, modes of sociality in the digital age, and the mass-media phenomena that populate the world around us. After a year in which the group moved back into online publishing, embracing a “pivot to video,” trumpeted by social media giant Facebook (which, ironically, was later revealed to be based on a false premise), the collective has opened a show in London at Project Native Informant, compiling a range of recent works that explore the idea of the 2008 economic crisis as a missed opportunity for economic revolution. 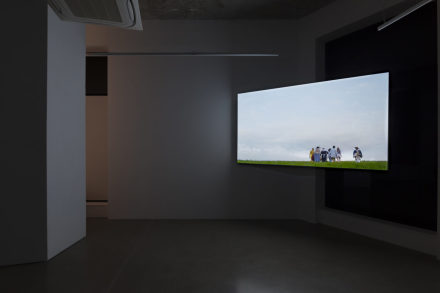 The show is divided by theme, each using a recent video production as a way to explore and elaborate on the past ten years of political and social history as reflected in the rear-view mirror of pop culture. The first piece on view takes on the popular program ‘Gossip Girl,’ paralleling its premiere, its fetishization of wealth and excess, and its premise of social warfare with the subprime mortgage crisis that triggered the Great Recession of the early 21st century. The piece, exploring both social and economic threads passing through each subject, traces the Bush Administration’s bailout, the early Obama years, and the sense of decadence that populated media during the era. 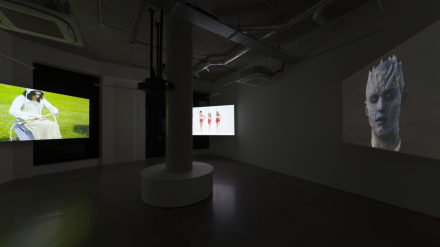 By contrast, the show’s titular video, A Good Crisis features the Night King from HBO’s Game of Thrones, discussing the missed opportunity for economic revolution following the mid-2000s global financial crisis. He explains how financiers and CEOs now revel in the feudal frenzy of the “new rentership society,” a term propagated by private equity firms to explain the economic shift that has seen the renter population of the United States soar in the aftermath of the 2008 housing crash. Paralleling the raw combativeness of economic power-brokers up to the current day, the video explores just how we have both framed and incorporated the ideas of feudalism into the modern structures of society. 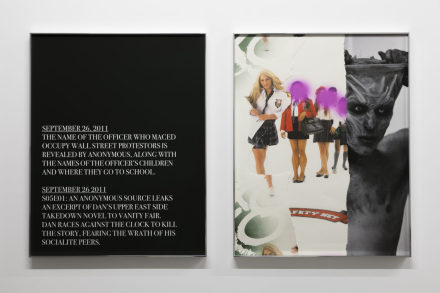 Throughout, the show asks questions of the modern social order that seem already answered by the media formats we produce. In the realm of images, Dis seems to ask, in which circulation of products and ideas is so rapid, is the generation of new formats, new concepts, new ways of living and existing possible? While the idea that our last chance as a society may have been 2008 is a little unnerving, the show offers complex food for thought.

This entry was posted on Friday, September 6th, 2019 at 12:55 pm and is filed under Art News, Featured Post, Show. You can follow any responses to this entry through the RSS 2.0 feed. You can leave a response, or trackback from your own site.