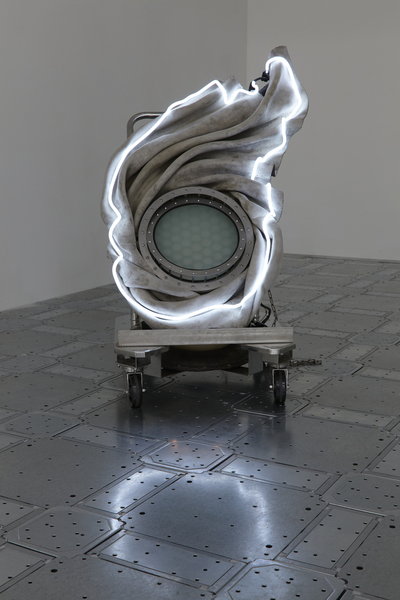 On view this month at JTT Gallery in downtown Manhattan, artist Elaine Cameron-Weir has orchestrated a taut but conceptually nuanced exhibition, continuing her exploration of varied sculptural tropes, studied investigations of materiality and scale, and subtle, evolving narrative forms that hint at the artist’s rigorous process and abilities. 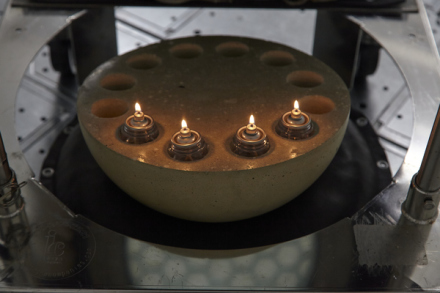 Cameron-Weir’s works often present as material and spatial riddles of sorts, pulling together disparate masses and elements in a manner that makes their visual reception hinge on their experience in three dimensions. Two works, bearing particularly verbose, lengthy titles (one is named ’at the end of the line an echo sliding downtown the mercurial reflective pool of a familiar voice and me a person it never made real in the mirrors of my own halls,’), are of particular note, combining a range of materials that include sculpted and frozen leather, swirling around what appears to be a glass porthole, its spiraling mass accented by a glowing halo that seems to both hold its motion at bay and emphasize its curves and wrinkles simultaneously. Beneath and behind this mass of material, one can see a ring of small candles, burning in the gallery space and giving a fragile visual and structural counterpoint to the elements above. This sense of space and heft, each playing off each other, makes her works particularly inviting to explore and experience. Grafting a presence and relationship between materials and objects, these mechanisms map out coordinates in space as both sculptural action and a remainder of that original action. 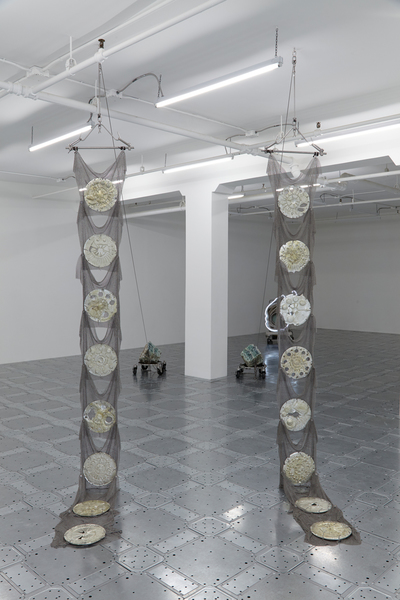 Other works rely on different counterpoints of form and material. Another work ‘the face on the tip of the tongue its hum next to me underground the wind comes and is seen heralded by strings these devices measure tracks and life activities in the fossil record symmetries to the physical world,’ suspends strands of steel over the gallery floor, held in place by a massive hunk of fluorite, giving the work a subtle point of focus that embellishes the exchange in form and mass with a glittering mineral hunk. 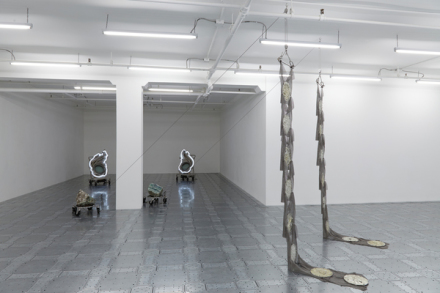 To Cameron-Weir, these conversations are of prime importance, her object-sculptures posed as practitioners of turning procedure into rituals, of courting customization as a commitment to openness, and of turning the sculptural action into a sort of mythic routine, the formal concerns of the artist becoming a site where both withdrawal and emphasis each take their turn. Her materials, ranging from glimmering mineral formations to hard steel, act as a sort of orchestra in space, each piece and part giving itself over to a broader narrative bent.

This entry was posted on Tuesday, September 17th, 2019 at 5:46 pm and is filed under Art News, Featured Post, Go See. You can follow any responses to this entry through the RSS 2.0 feed. You can leave a response, or trackback from your own site.