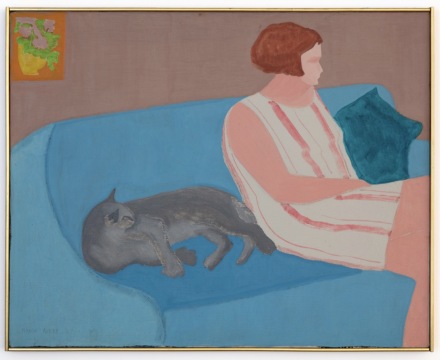 Currently on view at Blum & Poe through the end of this week, the New York based artist March Avery marks her first solo exhibition with the gallery, and uses the platform to develop a masterful exhibition around still moments and subtle gestures, a fitting first intro to the artist’s body of work, which now spans over five decades. 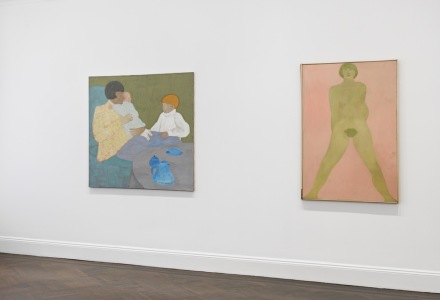 Focusing on portraiture and landscape and punctuated with still life, the selection of works on view is a masterful study in repose and reflection, capturing and investigating the raw vitality of moments passed through paint, and applied to canvas with a careful, loving approach.  Mothers read bedtime stories; children eat breakfast, sit on laps, and play Chinese checkers; clouds hover over the surface of a cerulean blue lake; and potted plants are placed amongst a child’s toys or present themselves in paintings hung behind a sofa, upon which a young woman reclines in the company of a cat. These diaristic tendencies that characterize Avery’s oeuvre encapsulate a lifelong commitment to the process of painting itself. 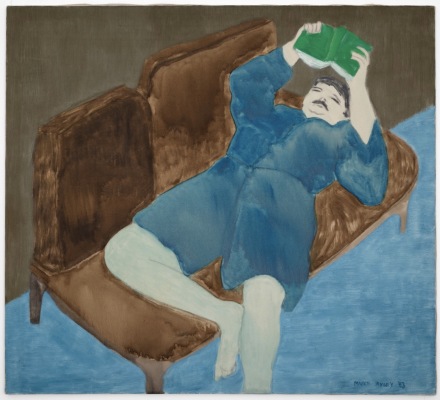 The daughter of painters Milton Avery and Sally Michel, March’s application extends itself with more realist tendencies.  Her work is studious in its embrace of its surroundings, and her adoption of painting as routine echoes the ways in which she has inherited a parallel reduction of form and chroma implemented in poetic compositions for which her father and mother are best known. While Milton and Sally’s techniques most adhere to modernistic approach, departure towards the familiar, namely the people, places, and daily disciplines that March holds most dear. 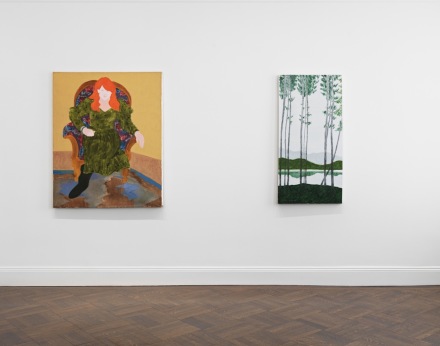 Stylistically, the painter’s work relies heavily on washes of color and a careful attention to post and movement.  Bodies are almost draped across the surface of the work, expanding out and filling the space with a masterful sense of repose, while landscapes rely on subtle, otherworldly accents to turn the subject matter into more than the sum of its parts.  Avery seems to borrow most from her parents in the sense of the painting as a transformation, of taking the image’s raw potential, and turning it into a site where moments of cool indifference to anatomy or perspective allow the world within the frame to take on a life of its own.

This entry was posted on Wednesday, September 11th, 2019 at 12:09 pm and is filed under Art News, Featured Post, Go See. You can follow any responses to this entry through the RSS 2.0 feed. You can leave a response, or trackback from your own site.