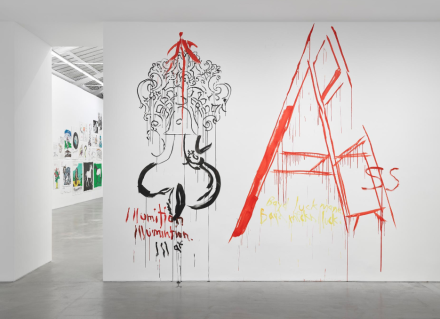 With the days of FIAC now fading into the distance, the art world has settled down a bit in Paris, but some of the fresh energy and excitement of the week remains, particularly in the Marais, where David Zwirner’s brand new exhibition space at 108, rue Vieille du Temple has now opened permanently. The well-appointed space is christened by American artist Raymond Pettibon, who marks his first solo show in the city since 1995. 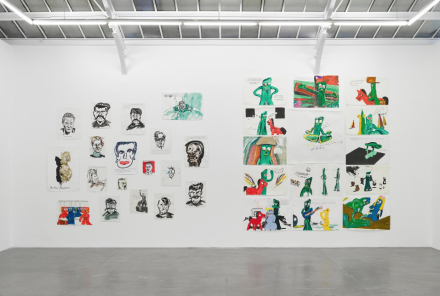 Pettibon’s influential oeuvre engages a wide spectrum of American iconography variously pulled from literature, art history, philosophy, religion, politics, sports, and alternative youth culture, among other sources. Intermixing image and text, his drawings engage the visual rhetorics of pop and commercial culture while incorporating language from mass media as well as classic texts by writers such as William Blake, Marcel Proust, John Ruskin, and Walt Whitman. Through his exploration of the visual and critical potential of drawing, Pettibon’s practice harkens back to the traditions of satire and social critique in the work of eighteenth- and nineteenth-century artists and caricaturists such as William Hogarth, Gustave Doré, and Honoré Daumier, while reinforcing the importance of the medium within contemporary art and culture today. 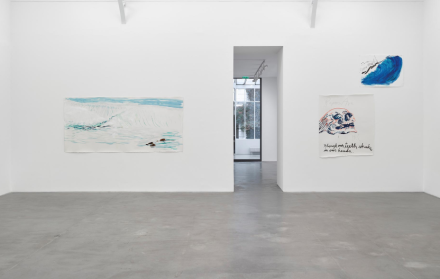 The works on view are familiar in content and concept, but equally explore new subject matter. Gumby, baseball, US politics and surfing all make their return, but reframed through new points of address and conceptual perspectives. In one piece, No Title (John Ford directed …), the artist depicts Gumby wearing a cowboy hat and riding his sidekick, the orange horse Pokey. To the left of the figures, Pettibon has written ‘John Ford directed: Irish riding the Protestands’, comically merging Gumby with John Wayne, the star of many of Ford’s famous westerns, while injecting the contentious religious opposition between Irish Catholics and Protestants through the symbolism of the colors of green and orange. 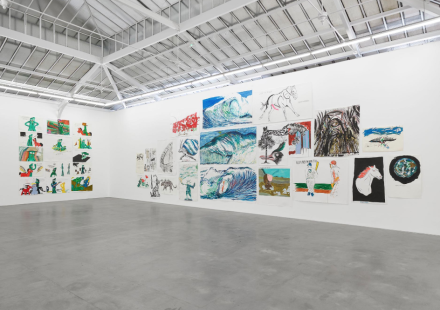 The show features the same sense of primal urgency and deeply felt empathy with a range of subjects and perspectives, struck through as always with a sense of the transformational power of experience and perception. Pettibone’s beloved wave paintings, for instance, pose the body as unified with the grandeur and towering hulk of the ocean, a moment of unity that underscores man’s occasional moments of connection with the natural world, and the idea that at certain points, both the raw and the familiar, can be brought together, suturing up pop culture references, nods to JMW Turner, and a distinct poetic surreal in a single package. To Petition, who pulls so frequently from the landscape of American comics and their history of nuanced, multi-level engagement with the language of the post-war American landscape, even to see for a moment is to comprehend a lifetime.

This entry was posted on Wednesday, October 23rd, 2019 at 12:26 pm and is filed under Art News, Featured Post, Show. You can follow any responses to this entry through the RSS 2.0 feed. You can leave a response, or trackback from your own site.