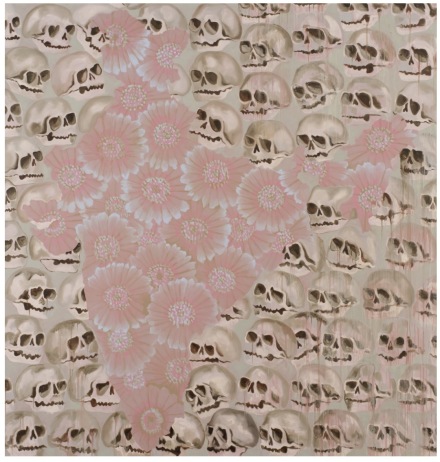 Artist Francesco Clemente opens a show of work at Vito Schnabel’s New York exhibition space, highlighting the artist’s famed nomadism and his embrace of varied geographies spread over the full expanse of the globe. Moving between Italy, the United States, India and elsewhere, Clemente has long embraced the practice of moving across sites, and allowing his aesthetic interests it follows. Clemente’s work traverses time and recorded history to probe the mysteries, ecstasies, incongruities, and, ultimately, the gravitas of the human condition, working through the metaphysics of spirituality, mysticism, identity, and the self, too render a body of work in a variety of mediums that is often charged with eroticism and intimacy, rich in references, and expansive in its openness to interpretation. 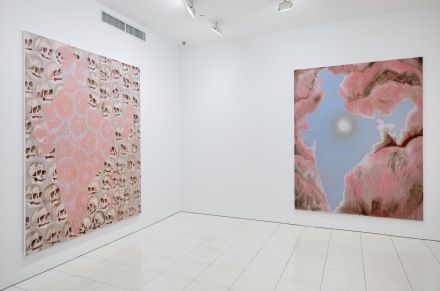 Clemente’s show, titled India, takes its name from the title of a new series of monumental canvases that continue Clemente’s lifelong dialogue with the cultural and artistic practices of India, where he maintains a home. The four paintings on view depict maps of the country’s geographic borders, punctured with symbols that draw from the itinerant experiences of Clemente’s life, and from his passion for paradox and metamorphosis. The artist twists his own personal histories and experiences through the lens of the landscape on which they were cultivated. 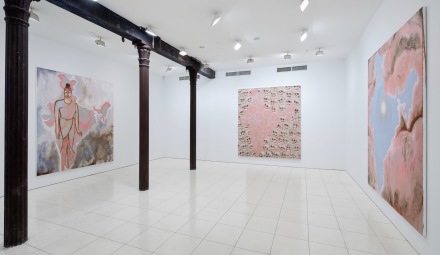 Painted in a sensual palette of understated earthen hues, these compositions are accented with brushstrokes of brazen pink. In one painting, India is composed of a field of pink flowers whose petals are tinged with subtle hints of blue. A background comprised of white skulls – a motif Clemente returns to time and again – surround the outline of the nation, streaked with drips of paint. In another work, the map of India is covered by waves and inhabited by fish, while the Indian Ocean has turned into land. The third canvas depicts the nation as an apparition in the sky; mysterious pink clouds part to form the shape of the country through which the sun’s energy radiates a hypnotic white light. Finally, the fourth painting in the group is engulfed by a smoggy atmospheric haze. Here, a haunting female figure dressed in a traditional sari and rendered with hollow white eyes, inhabits and animates India’s distinctive shape. 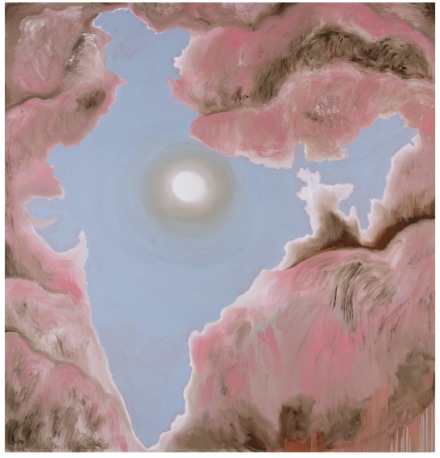 Non-linear and expansive, the works on view find Clemente drawing inspiration from cultural, historical, and aesthetic affinities, yet appear simultaneously as love letters to his adopted home, a sort of commingling of experiences and ideas in a manner that draws their shared spaces, memories and ideologies towards a point of convergence.

This entry was posted on Monday, December 30th, 2019 at 2:43 pm and is filed under Art News, Featured Post, Show. You can follow any responses to this entry through the RSS 2.0 feed. You can leave a response, or trackback from your own site.