Working across a range of media over the course of his career, including painting, architectural installation, digital prints, and critical writing, artist Peter Halley has strived to illuminate the structures of social space and communication that shape our experience of contemporary life. Opening his second solo exhibition with Greene Naftali this fall, Halley is presenting Heterotopia II, an ambitious large-scale installation that explores relationships between painting and architectural space. 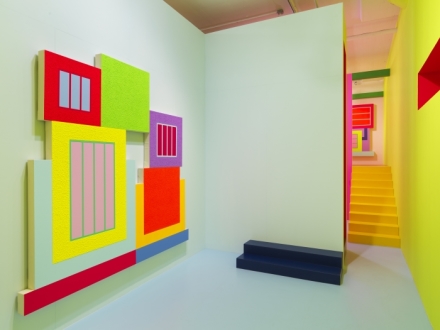 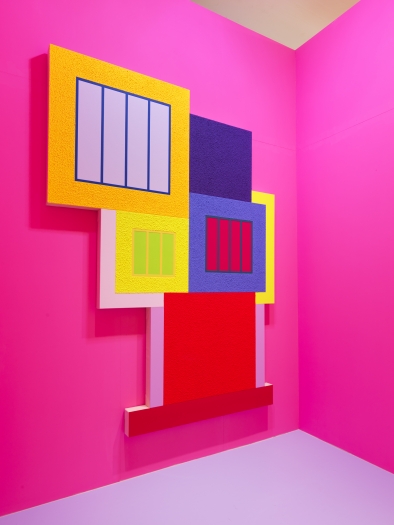 A multi-colored, labyrinthine structure in the ground floor gallery housing eight new shaped-canvas paintings, Halley’s work in the show is intended as a seemingly boundless movement through space and time, the experience of movement gradually disintegrating under the overwhelming inputs of color and form. The installation is enclosed by tall neon yellow walls, which functions both as a colorful bound and a barrier to experiencing the work from an exterior, instead requiring a distinct sort of surrender from the viewer. Organized around a glowing yellow core, the interior of the space is held apart, and the viewer may only orbit its center, never arriving at a final spatial conclusion. Time becomes an endless spiral, the viewer never fully arriving but always passing back on spaces that were visited before, until a sense of disorientation ultimately wipes the sensations of difference slowly from memory. 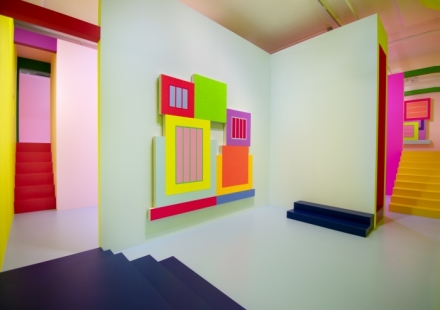 These ideas are echoed in the paintings themselves. Composed of multiple interlocking prisons and cells, the paintings create ambiguous figure-ground relationships, while echoing the geometric plan of their three-dimensional setting. They are subdivisions of space that function in relation to the space around them, underscoring the body’s subjugation to cellular logic, to the sort of carceral architectural that made of much of Foucault’s writing and which serves as a way to understand how the body is both described and molded by the society at large. Rather than moving into, through, and out of space, viewers are instead pulled into a boundless relationship, one which they are powerless to change.

This entry was posted on Monday, December 16th, 2019 at 4:43 pm and is filed under Art News, Featured Post, Show. You can follow any responses to this entry through the RSS 2.0 feed. You can leave a response, or trackback from your own site.