NEW YORK – JR: CHRONICLES AT BROOKLYN MUSEUM THROUGH MAY 3RD, 2020 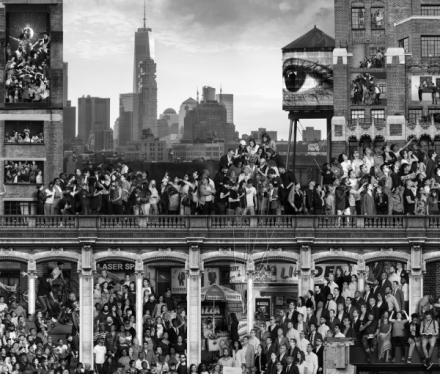 JR, The Chronicles of New York City (2019) all images via Brooklyn Museum

Currently on view at the Brooklyn Museum, artist JR inaugurates his first solo museum exhibition and first major North American exhibition, taking over the Main Hall of the museum with a show that traces the French artist’s artistic evolution, which began in the Parisian banlieue. His early photographic projects, such as Expo 2 Rue (2001-2004) and Portrait of a Generation (2004-2006), marked his start as a storyteller of his community, picturing graffiti artists and young people from the housing projects in the French capital. Giving voice to the marginalized, JR projects have always been collaborative ventures, involving the participants by allowing them to choose how they would like to be represented, both as individuals and as a group presented to the rest of the world. His works, often ephemeral art installation in public places, channel social change and inequalities and make him a true guerrilla street artist.

On view are photographs and video from large scale international projects which span several decades. Among them, Face 2 Face (2007), a provocative art project in Israel where he depicted workers side by side in diptych pasted on either side of the West Bank. The portraits were representing people on either side of the wall, Israeli or Palestinian, holding the same job. The project was considered the largest illegal photography exhibition ever made in Israel, and questioned identity and belonging in the conflicted area. 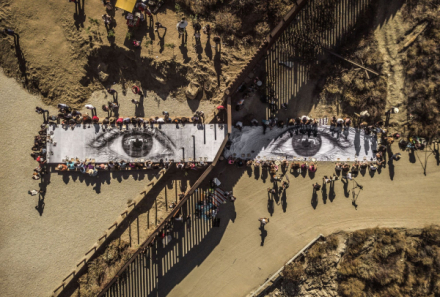 The West Bank was not the only wall JR has worked with, and on: in 2017 he pasted a monumental photograph of a child onto a scaffolding behind the border fence of the U.S – Mexico border. Peering over the wall, Kikito does not know what the wall represents, and the audience does not know what the child is thinking. In typical JR fashion, the installation was organized without any authorization from either country, and closed with a gigantic picnic on both sides of the border, with people gathered around the eyes of Mayra, a “Dreamer”, eating the same food and enjoying the same live music from a band split in half playing on either side of the border. 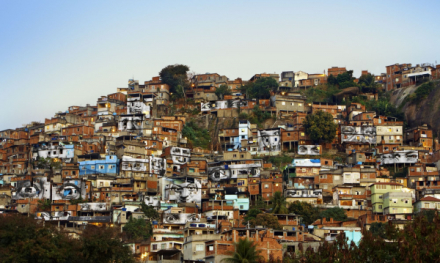 Along with these pieces, the exhibition present ephemera from several projects: Women Are Heroes (2008), where JR pasted blown-up images of the faces and eyes of local women along the hillside of the favela of Morro da Providência, in Rio de Janeiro, Brazil. The project was then completed also in Cambodia, India, Kenya, Liberia and Sierra Leone. Or Inside Out, an ongoing project that since 2011 has given individuals and group the opportunity to use their own portraits to highlight an issue within their community.

At the heart of the exhibition is The Chronicles of New York City, a larger than life mural of more than one thousand New Yorkers. Inspired by the murals of Diego Rivera, JR and his team drove a 53-foot trailer equipped with a green screen around the five boroughs of New York City. In the floor to ceiling murals, all ages and colors are depicted, tourists and locals, people working and at leisure, at the beach or crossing the street, inside a subway or in the gym. In this collage of everyday New Yorkers and of its places, JR engaged with people, talking, sharing experiences, and asking them to choose how to pose. Interactive screen scattered throughout the space allow visitor to click on a character and listen to their story: some talks about their favorite bagel spot, some talks about when they first moved to the city.

In addition to the works presented at the Museum, a staggering public mural featuring The Chronicles of New York City has been unveiled at the beginning of February in Domino Park, Williamsburg, Brooklyn. The project has been conceived in collaboration with LOT-EK, which designed Triangle STACK #2 to help bring JR’s mural into the city’s open space. JR’s murals are also on view at Kings Theatre in Flatbush and the Brooklyn Academy of Global Finance in Bedford-Stuyvesant, with more planned for the run of the exhibition. 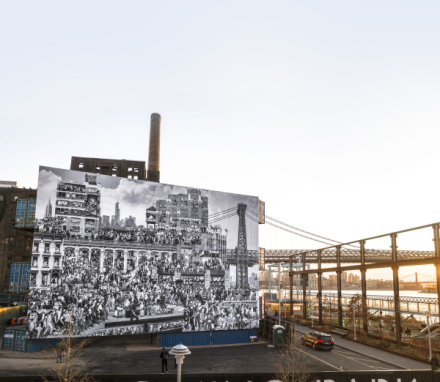 JR, The Chronicles of New York City (2019) via Brooklyn Museum

The works on view talk about connections between people, voice, perspective, and engagement. The very core of JR’s engagement is the human connection he creates among the participants in his works, but also in the audience who connects with the installation in the physical world.

This entry was posted on Monday, February 24th, 2020 at 12:51 pm and is filed under Art News, Featured Post, Show. You can follow any responses to this entry through the RSS 2.0 feed. You can leave a response, or trackback from your own site.