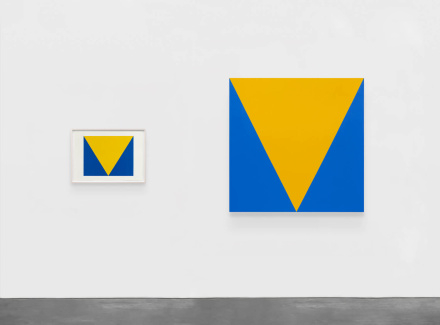 Since her time in post-war Paris when she first developed her signature hard-edged style, painter Carmen Herrera has instilled a rigorous practice to create her distinctive body of work, culling together a range of various color structures and elusive geometric arrangements to arrive at her engaging and unique constructions.  Now, the artist is opening a show of recent works at Lisson, bearing the title Painting in Process, exploring her construction and exploration of her works before their final form. 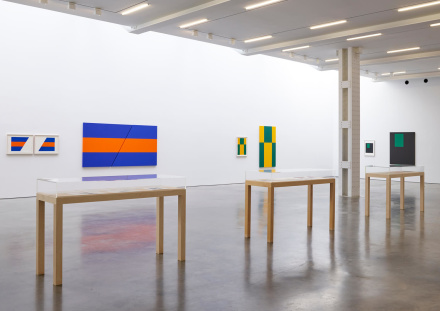 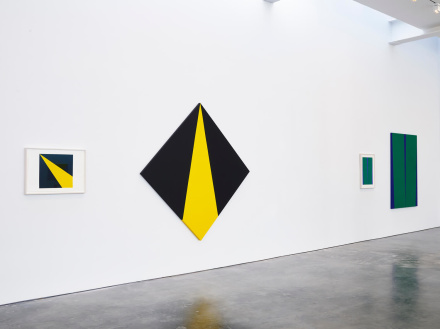 The show marks the first time that Herrera’s work is explored from its production background, and the exhibition makes a striking and studious entry in her work.  Beginning from a drawing and moving it towards more abstract bounds, Herrera’s work and visual language goes through several iterations, beginning first with a sketch on gridded paper, using a ruler or triangle to create structure and divide space, then turning this sketch outwards for further elaboration. In the sketching phase, Herrera also selects the colors she will apply, always with careful consideration of their relationship so that no one hue is more dominant than the other. Color cannot be separated from form, and by laying out the different compositions and colors in these initial drawings, she works through many possibilities, breaking down her options by process of elimination. When the framework is established, Herrera then proceeds with a formal painting on paper. Here, she further refines the composition by introducing acrylic paint. The painting on paper may then be translated to canvas, with occasional slight adjustments in orientation to account for the larger scale. 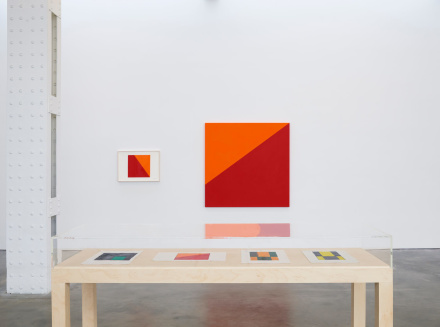 The show takes great pains to show the movement through these stages, and to emphasize Herrera’s exploration and consideration of her work’s construction at each stage.   While Herrera’s process is often characterized by meticulous constraint and distillation of choice, it is perhaps best described as a perfect synergy of artistic and scientific creativity. The three-staged approach creates greater potentiality for change throughout a painting’s creation. Each step adds an additional, but manageable, level of complexity, and within each progression, Herrera is able to re-examine and re-evaluate each decision, continuously building upon what she has learned in the stage prior. Thus, no painting is complete without the ideas that were explored in the painting on paper and sketch which came before.

The show is open now through October 21st.

This entry was posted on Wednesday, September 23rd, 2020 at 12:10 pm and is filed under Art News, Featured Post, Show. You can follow any responses to this entry through the RSS 2.0 feed. You can leave a response, or trackback from your own site.