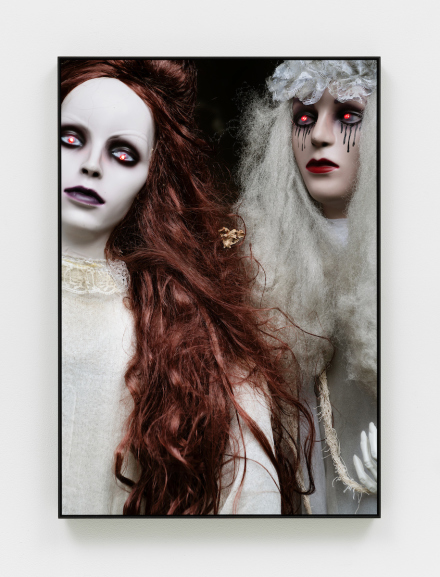 Upon entering the doors of 47 Canal Gallery, one is immediately greeted by a strangely familiar, and oddly timely series of images.  Skeletal hands, ghoulish visages and ghostly figures dance across a series of photos, while other frames bear the image if close up novelty gravestones and other Halloween decorations.  One month out from Halloween, the exhibition, presented by artist Michele Abeles, turns these familiar features into a meditation on commercial iconographies, capitalism and the spiritual undertones that these systems draw on, always centering the body in these conversations on space and time, the body and mortality. 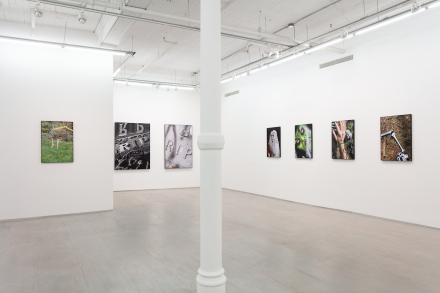 The mass market Halloween decor presented bears a strikingly evocative capacity, and draws in particular on a very time-sensitive mode of production. Abeles created the works between October 20–November 1 of last year, using the narrow window in which these figures populate both commercial and domestic spaces as a broad canvas upon which to operate and capture her images.  Witches, skeletons, ghouls and dismembered figures reflect the arranger’s spirit, while inviting the viewer’s projection.  The images’ allusions mass-produced aesthetics, as if they were cropped images of advertisements for these products, doubly emphasize a certain “lifelessness.”  The image seems to emphasize a certain listless, commercial ideology, “dead” both in the sense of its abstraction from everyday life, and in its absence of physical motion or human agents.  These are goods disposed of at the end of each season, quite literally dead to the world, and now decomposing in a landfill somewhere.  Formerly used as markers to echo the time of year and the purchaser’s own personality, they are now passed on into the void of seasons past. These notes make the pervasive “RIP” texts all the more ironic. 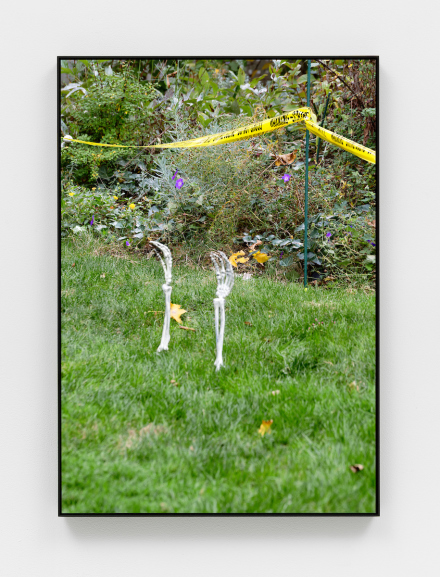 Also included are studio photographs produced in January 2020. Close-up zooms focus on the surface of plastic shopping bags, crumpled and cut in an attempt to replicate, using analog means, with the text “thank you” appearing on the bags in English, Spanish, French, German, and Japanese.  This sense of commercial goods, posed again in a different context, emphasizes a sense of absence and lost time.  Focusing on our most lifeless items and energies, Abeles underscores a sense of human awareness spreading out into our surroundings, and our most ephemeral materials.

The show closes October 3rd, just in time for a new Halloween season to get underway. 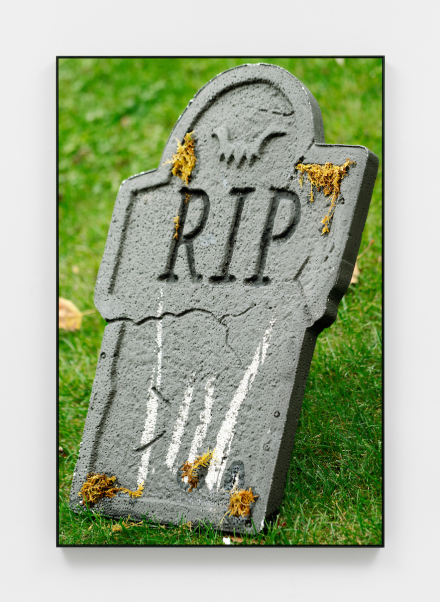 This entry was posted on Friday, September 25th, 2020 at 4:20 pm and is filed under Art News, Featured Post, Show. You can follow any responses to this entry through the RSS 2.0 feed. You can leave a response, or trackback from your own site.