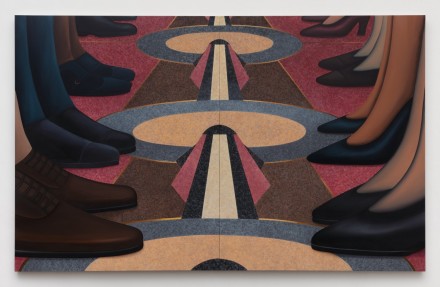 Joining White Cube for her first exhibition in London, painter Julie Curtiss has brought forth a selection of new compositions, sculptures and works on paper that emphasize the artist’s artful and attentive sense of composition, using framing and cropping to accentuate her cinematic, and often humorous sense of the absurd. Drawing on saturated colors, crisp detail, and scenarios which are at once banal and bizarre, her pieces exude a dreamlike quality, and make for a fitting introduction to the artist’s work. 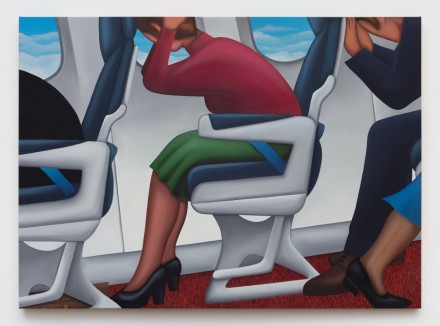 Curtiss’ visual language draws on a history of figuration that includes 18th- and 19th-century French painting, as well as the Chicago Imagists and the ‘pop’ imagery of comic books, manga and illustration. Through the use of unexpected juxtapositions of subject with object, of the seen and the implied, and exaggerated cartoon-like forms, her paintings are infused with a direct and deadpan humor, revealing the uncanny within the familiar and the grotesque and surreal undertones of human characteristics and behavior. Known for her surrealist re-workings of archetypes of femininity, in this new body of work the artist expands from the intimate and subjective to broader themes of the individual and society. 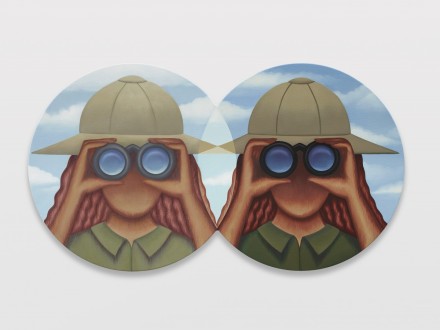 The show title, Monads and Dyads, alludes to juxtapositions of the singular and the communal, of shared states and totalities, the subjective and the group identity. These concepts find expression both thematically and formally in Curtiss’ paintings, while, according to the artist’s theory of number, the exhibition itself contributes a third strand, allowing them to be braided into one. Curtiss’ imagery equally feeds on dualities of classical surrealist juxtaposition – male and female, attraction and repulsion, animate and inanimate. Twins, doubles and reflections – sometimes false – proliferate in her work. A strong central axis of symmetry in the elaborate terrazzo floor of Lobby (2020) demarcates a binary opposition of masculine and feminine, represented by the smartly-clad feet of mysteriously ranked men and women. States of Mind (2021), which shares a mid-century atmosphere, barring, of course the anachronistic virtual reality headsets worn by its subjects, also sets up an expectation of twinning only to frustrate it, while Ghost (2021) plays a similar game with a deceiving mirror. 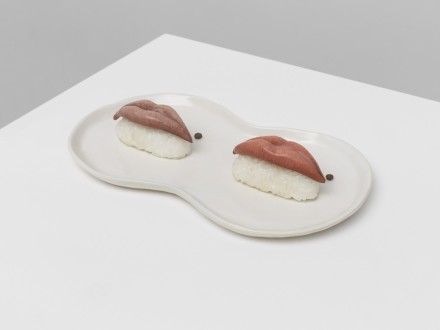 Pop and humor abound in these works, yet a distinct criticality around the state of modernity abounds, an emphasizing of both “seeing” and “ways of seeing” that showcase her works as revelling both in the act of looking, and in being looked at. Perhaps in a world of abounding screens and cameras, Curtiss’s most innate sense is the contact points between watcher and watched, and the slippage between those states. 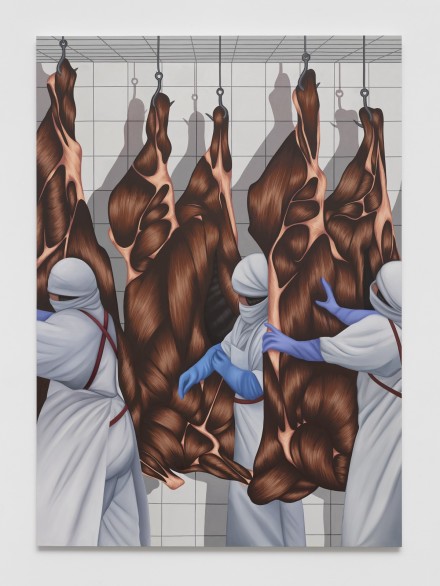 This entry was posted on Tuesday, June 1st, 2021 at 12:10 pm and is filed under Art News, Featured Post, Show. You can follow any responses to this entry through the RSS 2.0 feed. You can leave a response, or trackback from your own site.