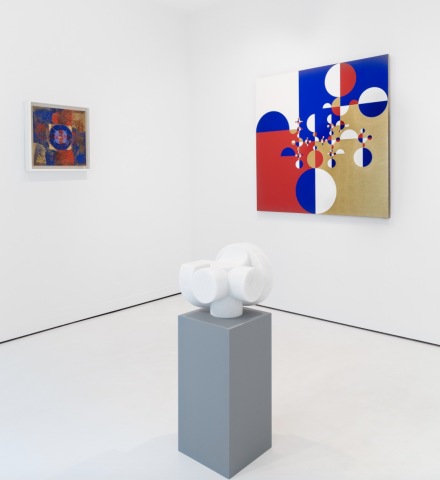 Currently on at kurimanzutto’s East Hampton exhibition space, the gallery has staged a small-scale show of works by the artist Gabriel Orozco. The artist, whose long explorations of geometric form and space in relation to both traditional art materials and reclaimed objects from the world around him, here presents a fitting summary of his recent practice in small-scale, but engaging outing. 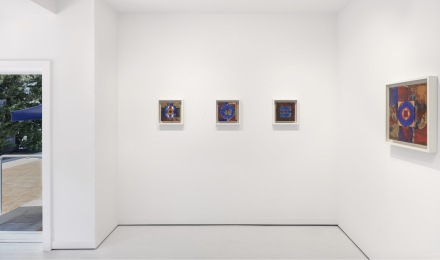 Orozco’s works in the exhibition are anchored in his experimentations with planar boundaries, material interactions, and color, the series continue his ongoing analysis of the circle within nature. Orozco began the works “Folding Stamps” and “Folding Flags”, defining  the outward spiraling of linear creases in paper, as expansions within an exploration of geometry. Orozco accents these paper creases with gouache, which he then presses between folds, transferring pigments from one side to another. Through the layering and erosion of transparent and opaque materials, Orozco plays with assemblage, texture, line, and depth, creating richly tactile works that are imbued with a sculptural quality. 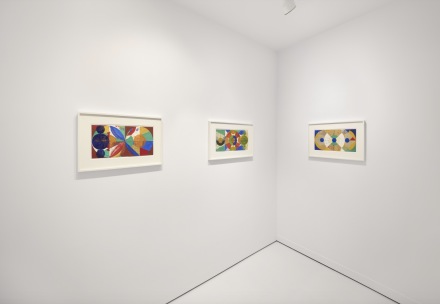 The artist is committed to a “dual commitment to symmetry and concentricity,” according to the show’s press material, and the exhibition makes this point explicit. The pieces take these notions of the twist and fold, and extend their meaning outwards towards the viewer, finding a fitting echo in the sculptures on view. Orozco’s interest in how geometries can cross barriers not only within the material itself, but equally can break down boundaries between the work and the outside world. Possessing a rough, improvisatory nature here, the show makes much of the artist’s exploration of immediacy and exploration, posing these Folding pieces against the more intricately laid-out wall pieces nearby, drawing engaging lines between the artist’s line of inquiry and the horizons which they often arrive.

The artist’s work is on view through July 25th.

This entry was posted on Friday, July 23rd, 2021 at 10:56 pm and is filed under Art News, Featured Post, Show. You can follow any responses to this entry through the RSS 2.0 feed. You can leave a response, or trackback from your own site.