On now at Metro Pictures, a group show featuring the work of Reza Abdoh, Jean Genet, Nash Glynn, Torbjørn Rødland, Elliot Reed, Heji Shin, and Nora Turato, takes on an engaging notion of the dream, drawing on Freudian psychology and philosophy to explore the idea of wishes, imagined landscapes and distorted impulses as the landscape of the repressed and the taboo, a show that unfolds like a dream in its own right, and which poses its images as a set of tableaus in which the viewer is welcome to find fragments of themselves. 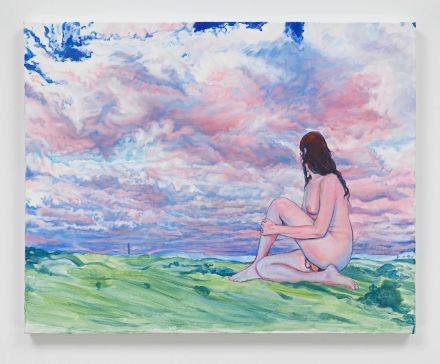 Titled Wish, the show is intended to unfold like a dream, with the wish exemplified by each artwork made available to viewers for interpretation. For instance, Genet’s 1950 film Un chant d’amour presents a voyeuristic prison guard excitedly leering at prisoners in their cells, presenting a lust and longing under lock and key that reaches from psychological desire to unique expressions of intimacy. The prisoners, in one scene, share a smoke through a wall, one blowing smoke through a straw stretched through a hole in the wall into the mouth of the other. Rødland’s Intraoral no. 2 repeats the image of the open-mouthed man in Genet’s film. A figure reclines in a dentist’s chair, the mouth centered in the frame while a latex-gloved hand pulls down the bottom lip. Rødland’s photographs capture unsettling or bizarre moments in otherwise mundane scenes similar to everyday life, and here, poses a clinical stand-in for Genet’s erotic metaphor. 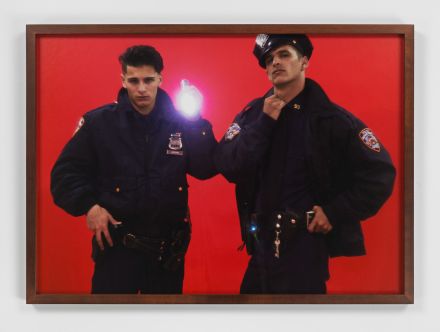 Sex and power are enduring images throughout the show, and find their echoes across a range of images and ideas here. Yet equally are bodies in repose, and withheld moments of concupiscence. In Glynn’s work, an oversized figure sits nude on a sweeping green field, her head is turned away from the viewer with one breast visible as she stares off into the distant landscape dominated by a dramatic pink and blue sky, her phallus also expose. A vague, illegible rectangle stands erect on the horizon, posing a trans female colossus in a dreamscape that presses the imagery used to move beyond binary readings of sexuality.

The Hip-Hop Waltz of Eurydice was written and directed by Reza Abdoh. The exhibited video is a recording from a 1990 performance of the play at the Los Angeles Theatre Center. In the original myth Orpheus descends to the underworld in order to bring his wife Eurydice back to the world of the living with him. His request is permitted but under the condition that he never looks back at his wife before leaving. Uncertain that Eurydice follows behind, Orpheus turns back just before exiting and loses her forever. In Abdoh’s interpretation of the myth, the couple have a forbidden love and their sexuality is repressed by the unsightly, fat-cat Hades. 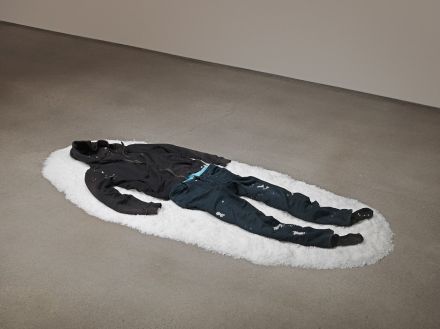 The show’s subject matter, mining a diverse series of fluid sexualities, genders and representations, makes much of minimal and expressive formats here, presenting bodies lounging across boundaries and repressive structures, much as Genet’s characters share a moment of intimacy through a wall, under the watch of the prison guard. Sex and desire are posed here as both dream and expression, a space where the body and soul seek to break out from their confines.

This entry was posted on Thursday, July 15th, 2021 at 12:00 pm and is filed under Art News, Featured Post, Show. You can follow any responses to this entry through the RSS 2.0 feed. You can leave a response, or trackback from your own site.