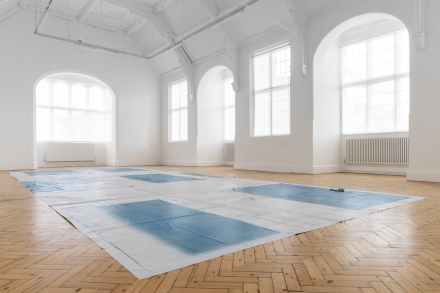 On now at Camden Art Center in London, Computer marks Olga Balema’s first solo exhibition in the UK, centered around a single flat sculpture, created in her studio and the surrounding streets in New York, and consisting of a large digital print of a domestic carpet repeated in a grid-like arrangement, manipulated first through the ‘banner buzz’ digital printing interface and later with different movements and incisions. The work is minimal in the most explicit sense, a series of flat panels attempting to present space as an abstraction with the most limited means possible. 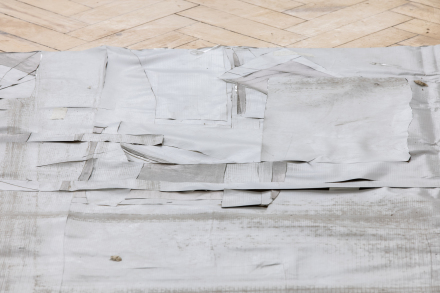 The piece is a continuation of the artist’s continued attempts to de-stabilize her own practice, proposing an uncertain relationship between the work and its outer bounds. Structuring space in a way that offers little in the way of what one could term an “enjoyable” viewing experience, the piece instead turns the sculpture into a system that both holds and repositions the artist’s work in a tenuous relationship with notions of completion, construction, and meaning. Balema has elected her sculpture as a “note-taker,” of sorts, calling it “a form that gathered up a lot of impulses from my recently fragile cranky psyche.” 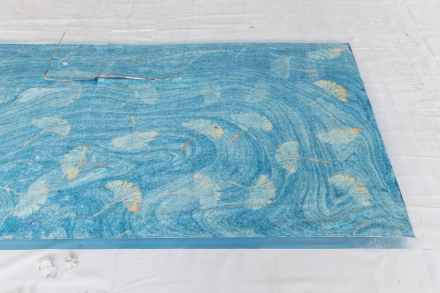 Marking the work repeatedly with a pencil and allowing it to become a nuanced accumulation of marks and responses to those same marks on the canvas, the piece turns into a compilation of meanings and structures, a set of repeated actions where marks are propagated with such passive gestures as walking back and forth, hoping for ideas to ‘appear’ and allowing the work to produce itself by ‘working without working’. 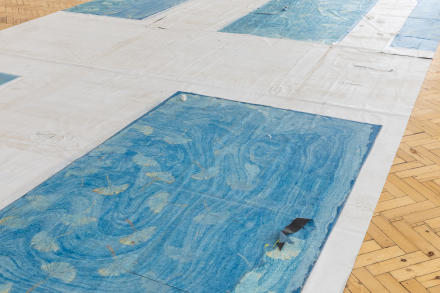 Responding to specific sites, Balema’s works often take as a starting point the physical and psychological characteristics of the gallery, playing with, exaggerating or contradicting them. Where a print of a domestic carpet may once have felt at home in the gallery, this calmness is distorted by the abject appearance of the installation. Stylistically the work touches on the genre of installation art and contains a post internet impulse, both of which can provide forms of escapism while still resting on the more austere precedents of conceptual art and minimalism. Situated in the sculptural present, Computer does not fully indulge any of these movements yet nevertheless, it opens up a portal to a few other places at once.

This entry was posted on Friday, August 27th, 2021 at 12:00 pm and is filed under Art News, Featured Post, Show. You can follow any responses to this entry through the RSS 2.0 feed. You can leave a response, or trackback from your own site.