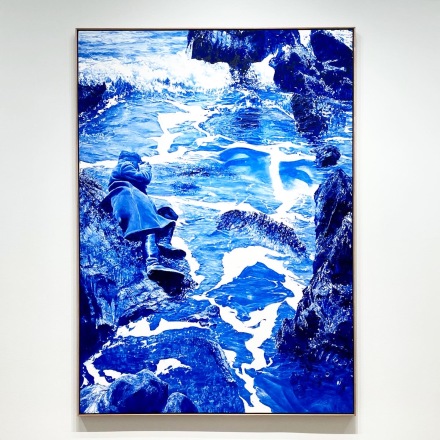 Currently on at Gagosian Gallery in New York, the dealer has compiled a body of new and recent work by painter Mark Tansey, spanning the past six years of work and running through a range of both paintings and graphite drawings mixed with oil and water. 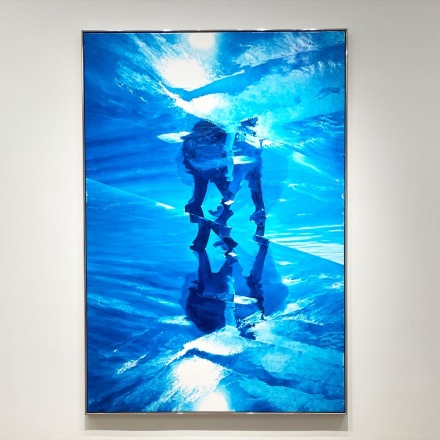 Working within the stylistic conventions of figurative painting, Tansey pursues a fascination with history by layering imagery derived from an extensive archive of printed ephemera, collages, and sketches, often depicting sublime landscapes punctuated by figures or vessels. In detailed monochromatic scenes—since 2004 he has made particular use of blue—he distorts perspective and scale, emphasizing their sensate presence while restructuring our readings of historical period and spatial orientation. Tansey paints using a subtractive process, first priming the canvas with gesso, then painting one section at a time and removing the light passages while the paint is still fluid. 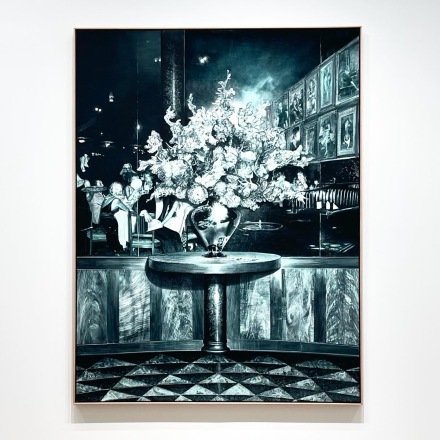 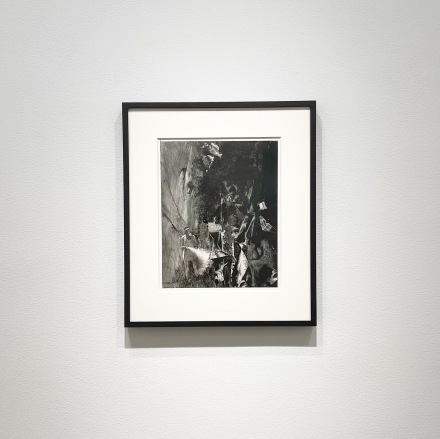 For this body of work, the painter uses complex mirroring approaches to the image, creating reflections and echoed images in a manner that results in strange “picture-in-picture” effects, splitting or doubling forms or inserting momentary glances of characters and figures into the work’s broader landscape or composition. In Spinner (2015), a lush vase of flowers sits on a table in front of a restaurant wall that reflects a room filled with diners, while in Reverb (2017), a formally dressed man and woman converse in front of an array of portraits of other couples, their own images framed by a mirror in a haunting visual echo that alludes to the title’s aural equivalent. These figures, posed in worlds that seem to be falling back in on each other, emphasize Tansey’s craft, and his conceptual interest in the painting as both a site of meaning-making, and one where the image can, at any moment, dispense with that same construction of meaning and understanding. 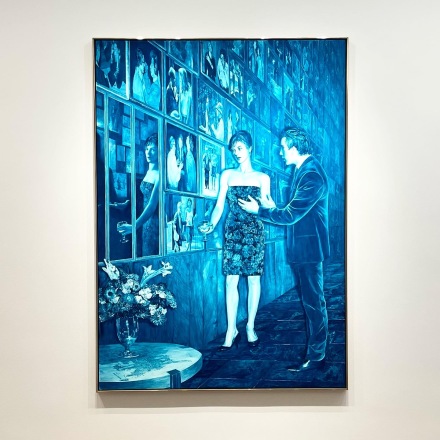 The exhibition also includes new drawings derived from imprints made with crumpled newspaper in liquid graphite, which suggest illusionistic representations of sand, snow, clouds, waves, and rocks. The unique molecular behavior of the graphite combined with the spontaneity of the technique generates base images comparable to Rorschach inkblots, from which multiple possible interpretations may emerge. Introducing deliberately drawn dry graphite figures and other variables such as shadows and reflections, the works become transformative environments, echoing back on their referential systems in the similar ways to that of his larger paintings.

This entry was posted on Wednesday, November 17th, 2021 at 12:00 pm and is filed under Art News, Featured Post, Show. You can follow any responses to this entry through the RSS 2.0 feed. You can leave a response, or trackback from your own site.