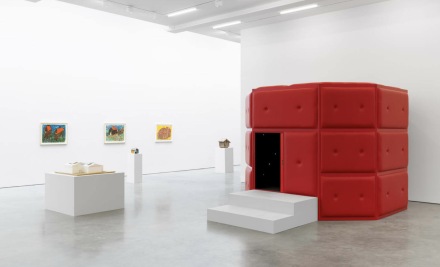 Marking a particularly unique investigation of modern sculptural and installation practice, Lisson Gallery is currently hosting Pavilions at its New York space, presenting a group of artists who engage with various forms and concepts surrounding the use of pavilions, ranging from physically-realized structures to designs conceived as ideas or sketches. Though the works in the exhibition vary in medium and scale, all are centered around the interaction with the viewer, together creating an environment that explores individual memory, identity and experience. 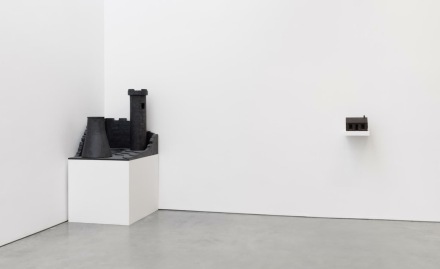 The exhibition features recent and historic works by a range of artists, the show creates a range of experiences that see the viewer moving in, out, and through a range of internalized spaces within the gallery, demarcations of space the invite concepts of independence and subjugation to a range of spatial logics. Entering Pavilions requires an immediate interaction with Untitled (TORN ASUNDER WITH A SPARK FROM ABOVE) (2014), a site-specific brick work conceived by Per Kirkeby and Lawrence Weiner, for instance.  Weighing 30 tons and built with over 6,400 bricks, Kirkeby’s angular building houses Weiner’s signature text-based work referencing an old tree torn apart by lightning. Words, matter and space overlap inside the monumental construction, presenting the viewer with an immediate challenge to their understanding of space and perception. 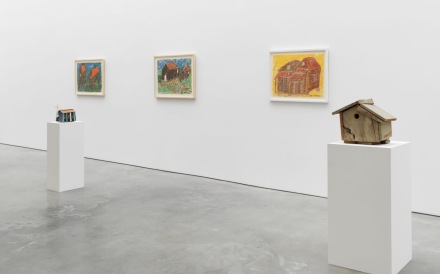 Adjacent to the brick installation sits Tony Oursler’s Psychomimetiscape (1987-1988). The model for an imagined setting features a medieval turret stationed next to a nuclear power plant. The work relates to the industrial military entertainment complex. Informed by cold war paranoia the work conflates early video game technology and the stylized spectacle of the war memorials and firework displays. Early computer animation in two-channel videos is used to trace the history of weapon production to meteorites and explore radioactive sabotage in the workplace, and the tabletop landscape plays with the forms of traditional architectural models. 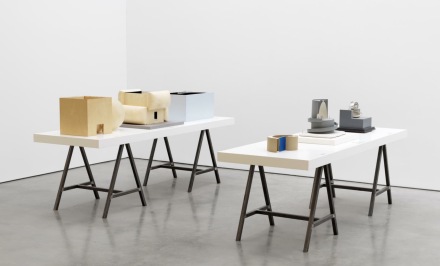 Throughout the exhibition the sense of self remains paramount. Multiple sculptures and pastel drawings by Beverly Buchanan explore the relationship between memory – personal, historical, and geographical – and place. Focusing on Southern vernacular architecture, Buchanan’s structures delineate an emotional grounding, embodying the spirit of those who lived in these “shacks”, as she defined them, and honoring the history of Black ingenuity and resilience. Nearby, Pedro Reyes’ works on paper similarly addresses social history and ancestry. Inca (2017) and Study for a Troglodyte Dwelling (2017) engage with Mayan, Olmec, Toltec and Mexican heritage, drawing on the notion of home in Pre-Columbian civilizations.

Throughout, politics are rendered in space, confrontations between body and object that underscore the range of experiences framed within the use of the pavilion, both in contemporary and historical applications. The show closes February 12th.

This entry was posted on Friday, February 4th, 2022 at 12:00 pm and is filed under Art News, Featured Post, Show. You can follow any responses to this entry through the RSS 2.0 feed. You can leave a response, or trackback from your own site.