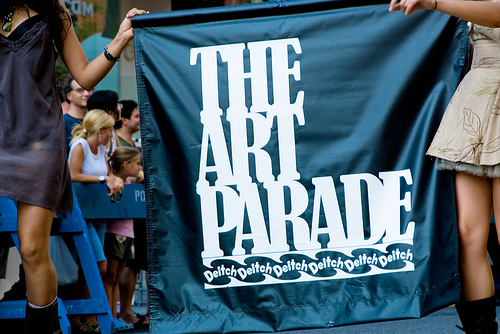 The third annual Art Parade (organized by Deitch Projects, Creative Time and Paper Magazine) took place this past Saturday, September 8th in SoHo. One dazzling hour saw over 80 participants dressed in a variety of costumes made of materials like glitter, foam and body paint. What was so mesmerizing about the parade? Was it the glint of glitter sparkling in the sunlight? Being outnumbered by trannies? The unabashed nudity? Whatever it was, the sheer amount of spectacle during this event made it difficult to turn away. More photos after the jump. 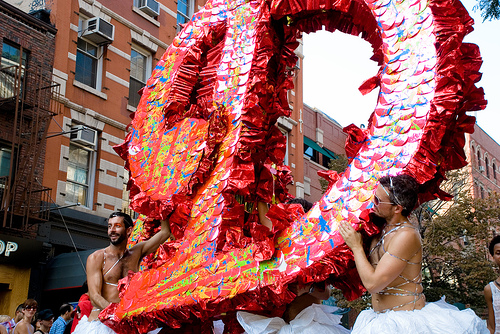 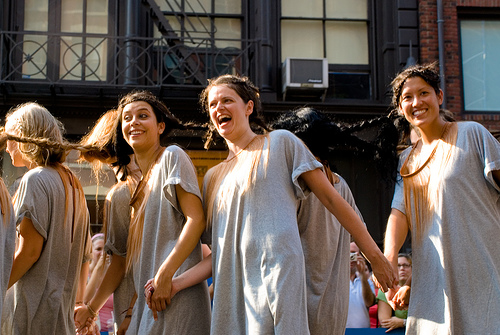 Highlights included the Dazzle Dancers and a piece by New York artist Hrafnhildur Arnardottir (aka Shoplifter) called “Siameze Rapunzels: The World’s Longest Multi Human Hair Braid”. Shoplifter works primarily with hair, and has made several pieces to adorn Bjork. There was an appearance by the HeartsChallenger ice cream truck, in conjunction with Paper. The heavy, funerary mood of the girls of Karen Black was a great contrast to the Rainbow-Brite cheer of most other participants. Despite the zombie makeup and mini-Karen baby dolls strapped to their bodies, the theme of horror proved to also be appropriate fodder for good natured New York street fun. 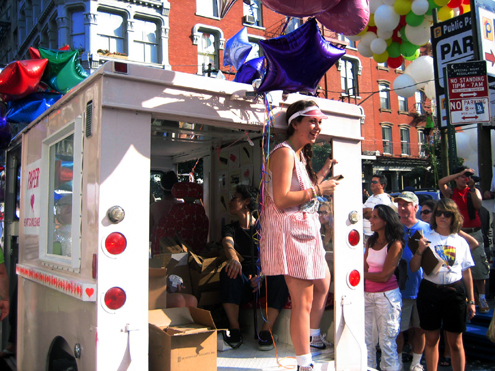 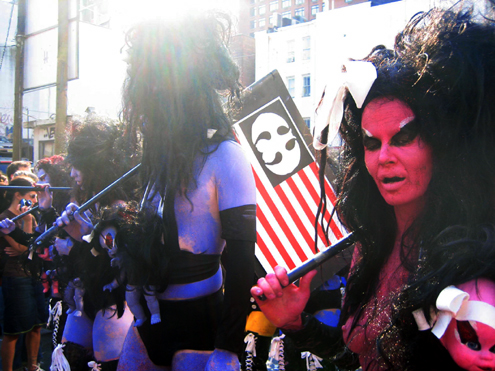 In an article in the New York Post, Suzanne Geiss, director of Deitch Projects said, “The idea grew out of the gallery’s programs, as an extension of our performance and installation projects.”

Taking art into the streets and allowing the work to interact with anyone and everyone is a concept that has yet to be seen in Chelsea, where streets full of white cube galleries are mostly quiet and proper. A venture into the art district last Thursday evening saw a cart on the corner of 25th Street as an alternative to the galleries, but Chelsea has yet to produce a full-scale exhibition such as the Art Parade.

While democratic enough, the Art Parade is akin to the concurrent shows at Fashion Week. Enlightening? No. Informative? For a studious few. Publicity inducing? To the maximum. It’s clear Jeffrey Deitch is just as intent on creating an image of himself and his gallery as a boisterous and colorful downtown fixture, as he is on propagating and selling contemporary art. But we all knew that before the cotton candy.

S. Department of Justice’s U.

S. Attorney’s office for the District of Columbia issued the following press release:

Drew pled guilty before the Honorable Robert L. Wilkins in the U.

S. District Court of the District of Columbia. Under terms of the plea agreement, subject to the Court’s approval, Drew would face a sentence of 78 to 84 months in prison. He is to be sentenced April 30, 2012.

According to a factual proffer of evidence presented as part of the court proceeding, the defendant represented himself on Facebook as a 19-year-old in November 2011, when he met the victim, a 14-year-old girl from Washington, D.

C. During the month-long chat on Facebook, the minor gave Drew her name, address, name of school and other identifying information. Drew told the girl that he wanted to come to her house to have sex with her. When he showed up, the girl refused to have sex with him. Thereafter, the defendant threatened the minor that he was going to distribute naked pictures of her to her school and family if she didn’t let him have sex with her. After weeks of repeated contacts via Facebook, phone calls and in-person visits to her school and home, the victim told her mother everything that happened. Her mother alerted the police, and Drew subsequently was arrested in December 2011.

Drew later admitted to communicating with the minor on Facebook and to traveling from Maryland to the minor’s residence for the purpose of having sexual contact with her.

This case was brought as part of the Department of Justice’s Project Safe Childhood initiative and investigated by the FBI’s Child Exploitation Task Force, which includes members of the FBI’s Washington Field Office and MPD.

Project Safe Childhood is a nationwide initiative to combat the growing epidemic of child sexual exploitation and abuse launched in May 2006 by the Department of Justice. Led by U. web site facebook phone number

In announcing the plea, U.

S. Attorney Machen, Assistant Director McJunkin, and Chief Lanier praised the MPD Detectives and Special Agents of the FBI Child Exploitation Task Force. They also commended the work of U.

S. Attorney Julieanne Himelstein, who is prosecuting the case. For any query with respect to this article or any other content requirement, please contact Editor at htsyndication@hindustantimes.com

This entry was posted on Tuesday, September 11th, 2007 at 12:20 pm and is filed under Art News. You can follow any responses to this entry through the RSS 2.0 feed. You can leave a response, or trackback from your own site.