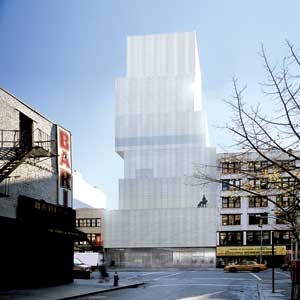 Photo via The New Museum

Advertising Age March 19, 2001 | Tsui, Bonnie Shoppers demand freedom, and cosmetics retailer Sephora aims to please. The sale of high-end brands such as Christian Dior and Dolce & Gabbana alongside the likes of Clinique, Hard Candy and Burt’s Bees speaks volumes about the direction in which luxury retailing, particularly beauty products, may be headed. Yet despite the investment parent company LVMH Moet Hennessy Louis Vuitton has poured into Sephora’s U.S. expansion, will the “open-sell” concept prove successful enough to ring up the profits?

One of the largest retailers of perfumes and cosmetics in Europe, Sephora made its move to the U.S. in 1998 with Sephora USA. Self-proclaimed as “the future of beauty,” Sephora stores allow customers to roam freely and sample products on an open floor without the interference of the sales clerks usually found at traditional department-store cosmetics counters. The brand and its online affiliate [Sephora.com] are units of the Selective Distribution Group of Paris-based luxury giant LVMH.

Sephora now has 461 stores in 12 countries, compared with 57 stores in France in early 1998; 17 stores opened in the U.S. alone in 2000. LVMH is looking to derive a third of its revenue from U.S. operations and is intent on extending retail networks here-particularly with Sephora. But analysts are not so sure about Sephora’s profitable expansion as LVMH’s own net profit growth falls short of forecasts.

2001 OUTLOOK LVMH reported 2000 earnings March 7, announcing a 27% rise in operating income to $1.82 billion. But slower sales growth reflected weakening currency in key markets Japan and the U.S. Net profit growth was squeezed to 4%, far short of the expected 22%; net profit of $787 million was stunted by the costs of heavy promotion of the Sephora cosmetics chain in the U.S. Last year’s acquisitions binge, which included the purchase of struggling beauty e-tailer Eve.com’s assets, also pressured profits. The group, however, asserted it will achieve “double-digit growth in sales and operating income” in 2001. LVMH does not break out sales and financial performance by unit. Stating the company is not yet ready to issue marketing plans, Sephora did not wish to comment at press time.

“There are differing opinions on whether or not Sephora is financially successful,” said Karen Young, chief executive officer of The Young Group, a beauty consulting firm. “Some industry people think they’re not doing well-there’s been a lot of speculation about it, which makes you ask what’s going on.” Analysts remain equivocal about LVMH and Sephora’s performance. On March 6, Goldman Sachs cut its earnings per share and share price targets for LVMH, due to the cost of investment in auction businesses and weakness in the yen and the U.S. dollar (Japan and the U.S. make up LVMH’s biggest consumer markets). The investment banking and securities firm said it estimated higher losses at the group’s dot-com units, which includes eLuxury.com, as well as at its Sephora retail stores in the U.S. LVMH took Sephora under its wing in 1997. here sephora coupon code

LVMH group Chairman Bernard Arnault confronted analysts and other market watchers with a positive air. “The first half will be affected by morose American sentiment, but each time we have gone through a period of uncertainty, we have made progress in relation to competitors,” he said. The only sign of slowdown for 2001’s first two months was not in the company’s luxury goods, he added, but in champagne-not surprising now that the millennial hoopla has died down. in our site sephora coupon code

LVMH also stated it continues to focus on investment activities for Sephora, claiming “accelerated sales growth” as “new store openings continued in key markets.” Operating costs, however, were just shy of breakeven for the selective retailing unit, and LVMH acknowledged investments in the Sephora store chains did negatively impact results.

`TREMENDOUS WAVES’ Despite the question of its financial profitability, Sephora has made a huge impression as a retail concept in the world of cosmetics-particularly with luxury goods, where exclusivity and personal attention have always reigned.

Initially, retailers were reluctant to give up the individual sell stance on cosmetics, which requires customers to ask for assistance. Most believed once a salesperson was “helping” a customer, he or she would be more likely to buy more product. Some analysts have described Sephora’s approach as the “Barnes & Noble” of beauty and makeup. Sephora has been heavily visible in promotions, most recently masterminding the first-ever Beauty Runway Show in last month’s “7th on Sixth” Mercedes-Benz Fashion Week in New York.

“Almost anyone in the industry that you ask would say that they’re making tremendous waves, the ripple effects of which are still not obvious,” said Suzanne Grayson, president of Grayson Associates, a marketing consultancy in the cosmetics and toiletries industry. “It’s not just the fact that it’s a great retail store with a huge selection, it’s the environment that is totally different.” Ms. Grayson cites exposure to all price points of merchandise and the ability to help yourself as key points in Sephora’s plan. “When you say `open sell,’ this is it to the ultimate degree … though department stores are moving in the direction of open sell to a large degree in cosmetics. And though what they’re doing is not necessarily because of Sephora, it’s a justification of the fact that Sephora’s model works.” “They’ve been a wake-up call to more traditional department stores, [which have] lost tremendous market share in the last 10 years in terms of cosmetics,” agrees Ms. Young, the beauty consultancy CEO. “But the funny thing is … for the most part, when you go into these renovated department stores, the atmosphere doesn’t feel any different. It’s the same sales approach they’ve been using for 30 years.” Sephora’s arrival, Ms. Young notes, has changed the landscape of the cosmetics shopping experience. “It’s much more user-friendly than a department store. But from a marketing standpoint…the final execution is not as well thought-out as it should have been. It may have been too rushed, trying to put so much in place so quickly.” From a consumer perspective, she added, Sephora’s second tier-meaning consumer amenities and stock depth-is weaker than that of many larger department stores.

A NEW MODEL FOR LUXURY?

Once Sephora arrived, however, retailers such as Macy’s West reorganized their beauty sections to mimic Sephora stores. In August 1999, Sephora USA filed suit against Federated Department Stores and Macy’s West for intentionally copying the look of its stores. The suit was settled in June 2000; terms were not disclosed. But the question of whether this kind of open sell environment could work for other luxury products is an interesting one.

Ms. Young, for one, thinks it can’t. “For cosmetics, [the Sephora model] works to be young, fun and spontaneous because it’s the nature of the beast,” Ms. Young said. With higher price points, however, there are higher expectation levels for a kind of service and atmosphere customers don’t expect at mass retail stores.

“To Americans, luxury typically includes something more, that some editing has already been done. With other luxury goods, you don’t expect an endless array, you expect that someone has set a taste level, complete with refined atmosphere and service.” COMING AD PUSH Lloyd & Co., New York currently is working on creative development for Sephora’s coming 2001 campaigns. The agency’s first work was done for an April 2000 Sephora.com print, radio and online campaign titled “The most beauty online.” The New York flagship store and site launched in October 1999 with a $20 million campaign from Omnicom Group’s DDB Worldwide, New York.

As for Sephora’s financial future, the picture is unclear. “I’ve heard from analysts that they will probably make $160 million to $200 million this year in business,” Ms. Young said. “Clearly, Sephora is in an investment spending mode. Right now, we’re all hovering over the body, waiting to see if money is being made. It might take a while to find out.” Contributing: Alice Z. Cuneo Tsui, Bonnie

This entry was posted on Monday, December 3rd, 2007 at 12:07 pm and is filed under Art News. You can follow any responses to this entry through the RSS 2.0 feed. You can leave a response, or trackback from your own site.