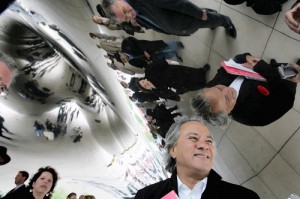 Indian-born artist, Anish Kapoor, has been commissioned to design a large-scale public sculpture for a new residential tower in Tribeca. In addition to Kapoor, the New York-based real estate company, Alexico Group, has chosen the world-renowned Pritzker Prize winning architectural firm, Herzog & de Meuron to design the building. Izak Senbahar and Simon Elias, principals of the Alexico Group, have announced that the Kapoor sculpture will be installed at ground level and be fully incorporated into the architectural design. The designs for the building and sculpture that will sit at the intersection of Leonard and Church Streets, will be released in the fall, and construction is projected to be completed in Spring 2010 .

56 Leonard St, in New York, the location for the Herzog & de Meuron building via Curbed

The artist, Anish Kapoor, a recipient of the Turner Prize, who’s known for public sculptures like “Sky Mirror,” a reflective stainless steel sculpture installed at Rockefeller Center two years ago, and “Cloud Gate”, a permanent sculpture at Millenium Park in Chicago, also recently sold a sculpture at Sotheby’s Contemporary Art sale for $3.87 million.

The Pritzker Prize winning architectural firm, Herzog & de Meuron, is known for their hand in the new stadium for the 2008 Beijing Olympic games, the Tate Modern in London, the Walker Art Center in Minneapolis, and the De Young Museum in San Francisco. 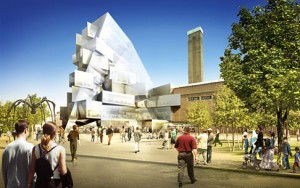 Artdaily quotes Senbahar and Elias of Alexico Group commenting on the new Tribeca tower, “We are pleased and honored to be able to create a tower of true global character at a moment when great architectural ferment is reshaping New York City. Through this commission we aspire to make a unique contribution to the urban fabric of our town with a building that relates directly to the city but is also an outstanding international address.”

This entry was posted on Wednesday, July 9th, 2008 at 5:12 pm and is filed under Art News. You can follow any responses to this entry through the RSS 2.0 feed. You can leave a response, or trackback from your own site.