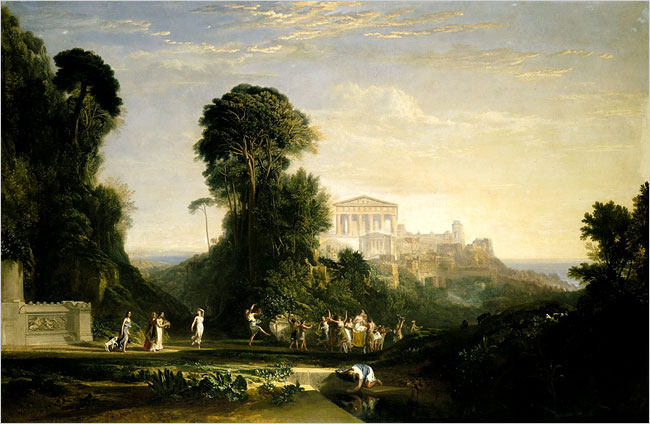 Temple of Jupiter Panellenius Restored, by J.M.W Turner, via Sotheby’s; Sold for $12.9 million.

Christie’s and Sotheby’s recent New York Old Master results were weaker than usual although there was some success amidst slow sales. The roster for the three days of New York sales (28 January at Christie’s and 29th and 30th January at Sotheby’s evening sales), included over 500 prestigious works. Such an opening of the 2009 auction season contained artworks of very fine quality at highly priced estimates. Even despite current economic challenges the two auctioneers offered a number of exceptionally refined artworks. These included a set of works by Francisco de Zurbaran consisting of twelve paintings (the twelve sibyls) priced between $2 and $3 million at Sotheby’s. Christie’s offered a still-life by Jean-Baptiste Simeon Chardin entitled “Still-Life with a copper pot” estimated between $1.2 to $1.3 million, quite an optimistic pricing since nothing by the artist has sold above the million dollar mark since 1992.

The marquee success came at Sotheby’s. A stunning work by Joseph Mallord Turner entitled “The Temple of Jupiter Panellenius” sold for $12.9 million, a price that is the second highest price ever realized for a work by Turner at auction. The painting won the bid from an anonymous buyer on the telephone and was sold by Richard Feigen, a Manhattan dealer who bought the painting at Christie’s London in 1982 for $1.1 million. The painting was featured in the traveling Turner retrospective that closed in September at the Metropolitan Museum of Art. 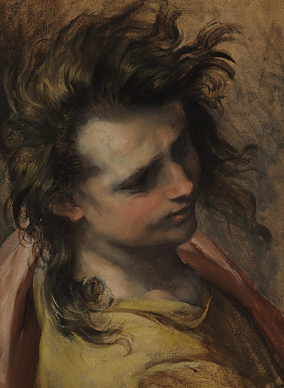 Head of Saint John the Evangelist by Federico Barocci, via Christie’s; sold for $1,762,500.

Neither Christie’s nor Sotheby’s made anything near what they had expected. The morning sales at Sotheby’s brought $57.7 million which was well below its low estimate of $74.4 million. ” There was no loose money,” said George Wachter, vice chairman of Sotheby’s old master paintings department in a recent NY Times interview. The final prices include the commission to the auction house: 25% of the first $50,000 to $1 million, and 12% of the rest. The estimates do not reflect commissions.

Another successful sale at Sotheby’s was “Bagpipe Player in Profile” by Dutch painter Hendrick ter Brugghen. Bought by London dealer Jonny Van Haeften for $10.2 million, who beat Mr. Feigen and a telephone bidder, the amount was a record price for the artist at auction.

At the Christie’s sale last Wednesday works were sold for far less expensive sums. The morning session brought in $11.9 million in sales, much below its estimate of $19.3 million. Federico Barocci’s “Head of Saint John the Evangelist,” (seen above) a sketch in oil on paper (laid down on canvas) by the 16th-century Italian master from Urbino was a major highlight of the market. After estimated by Christie’s to be worth $400,000 to $600,000, it sold to the international dealer Luca Baroni for $1,762,500 after five very intense moments of bidding. 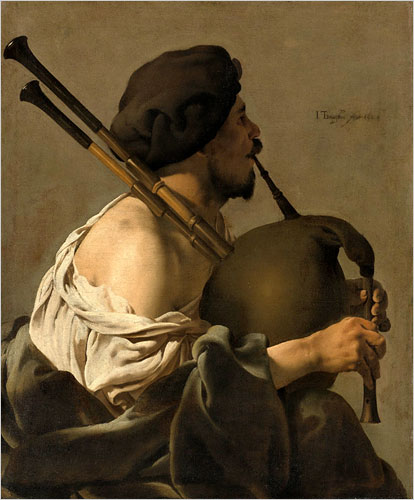 Bagpipe Player in Profile (1624), by Hendrick ter Brugghen via Sotheby’s; sold for $10.2 million.

The Christie’s Sale also featured a few Turner watercolors. The highest price paid went to “The Brunig Pass from Meringen, Switzerland,” executed between 1847 and 1848 sold to a telephone bidder for $1.1 million.

Different from the markets of Impressionist, Modern and Contemporary Art, Old Masters sales are most often dominated by dealers. Many were gathered in the salesrooms at Christie’s on Wednesday and Sotheby’s on Thursday, their purchases were nowhere near what they usually are. Despite the glimmer of some success amidst weak sales, the credit crunch affecting the economy now has auctions markedly slower than usual. 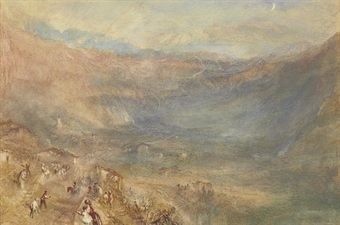 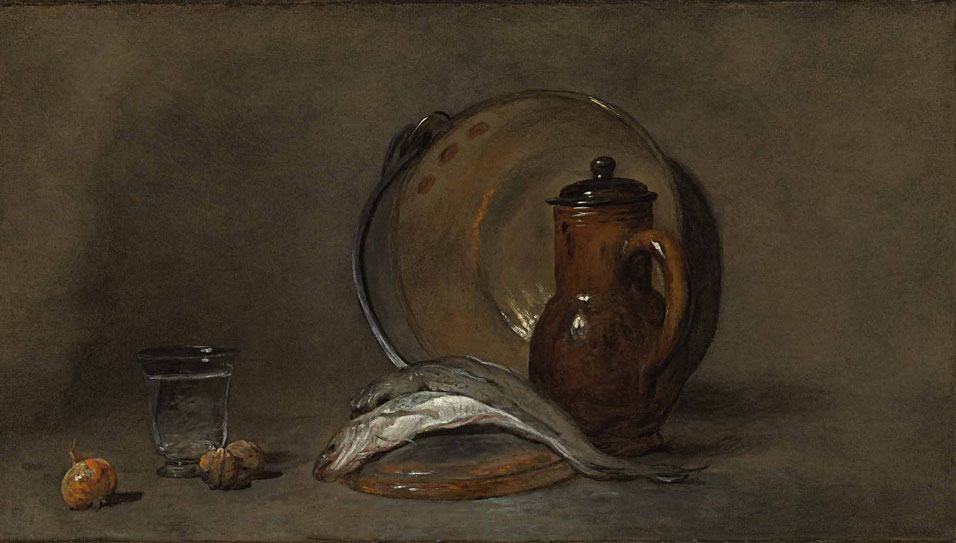 This entry was posted on Monday, February 2nd, 2009 at 8:26 am and is filed under Auction Results. You can follow any responses to this entry through the RSS 2.0 feed. You can leave a response, or trackback from your own site.